Orcus in astrology, or more correctly Orcus-Vanth, as it is a binary Plutino, is about: Self-integrity issues (to what extent do we really live our live the way we dreamed it?) – in relation to being imprisoned or feeling free; recording something or wanting to secure something; being very steadfast; being compelling and resolute, in terms of compliance with contracts, intentions, promises; being imprisoned; imprisonment; an extremely desolate feeling either turning into great cruelty or learning to parry it with (gallows) humor; a sharp mind, capable of disruptive statements; torture; death and death symbolism. 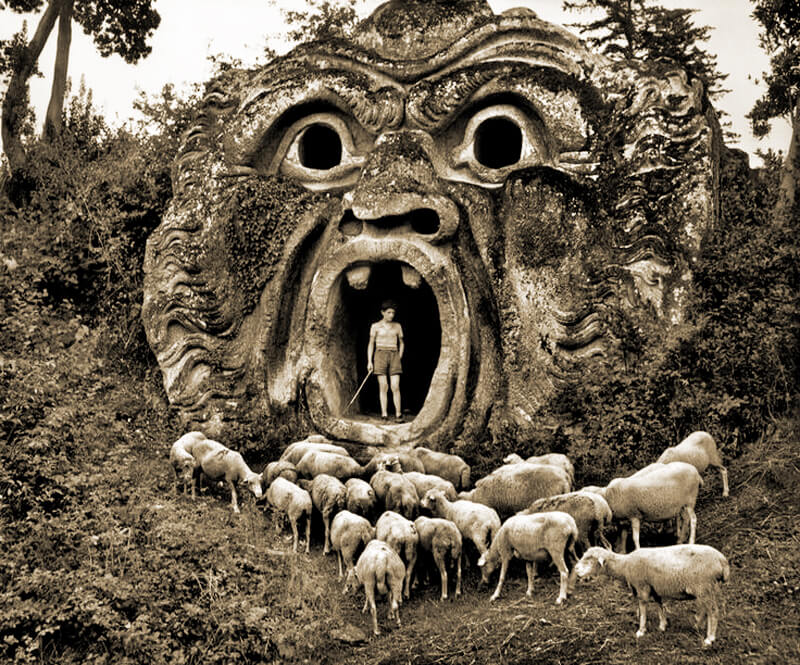 Orcus mouth in the Gardens of Bomarzo.

The mythology of Orcus

Orcus (Latin: Orcus) was a god of the underworld, punisher of broken oaths in Italic and Roman mythology.  As with Hades, the name of the god was also used for the underworld itself. In the later tradition, he was conflated with Dis Pater.

Orcus was portrayed in paintings in Etruscan tombs as a hairy, bearded giant. A temple to Orcus may have existed on the Palatine Hill in Rome. It is likely that he was transliterated from the Greek daemon Horkos, the personification of Oaths and a son of Eris.

The origins of Orcus may have lain in Etruscan religion. The so-called Tomb of Orcus, an Etruscan site at Tarquinia, is a misnomer, resulting from its first discoverers mistaking as Orcus a hairy, bearded giant that was actually a figure of a Cyclops.

The Romans sometimes conflated Orcus with other gods such as Pluto, Hades, and Dis Pater, god of the land of the dead. The name “Orcus” seems to have been given to his evil and punishing side, as the god who tormented evildoers in the afterlife. Like the name Hades (or the Norse Hel, for that matter), “Orcus” could also mean the land of the dead. As such a place, it was believed to be an abode for purification of the souls.

Orcus was chiefly worshipped in rural areas; he had no official cult in the cities. This remoteness allowed for him to survive in the countryside long after the more prevalent gods had ceased to be worshipped. He survived as a folk figure into the Middle Ages, and aspects of his worship were transmuted into the wild man festivals held in rural parts of Europe through modern times. Indeed, much of what is known about the celebrations associated with Orcus come from medieval sources.

The mythology of Vanth 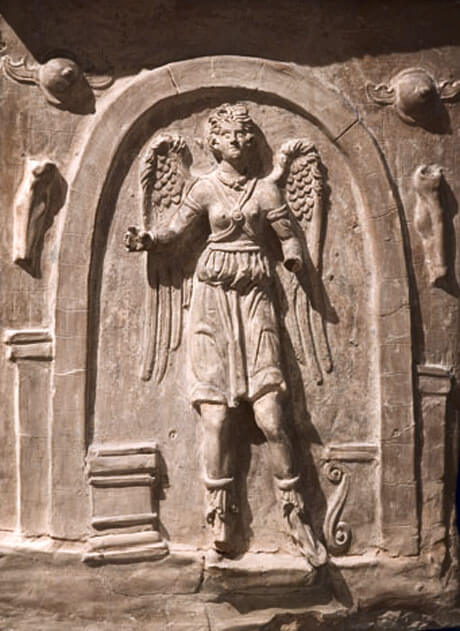 Vanth is a chthonic figure in Etruscan mythology shown in a variety of forms of funerary art, such as in tomb paintings and on sarcophagi.

Vanth is a female demon in the Etruscan underworld that is often accompanied either by additional Vanth figures or by another underworld demon, Charun (later referred to as Charu). Both Vanth and Charun are only seen in iconography beginning c. 400 BC, in the middle period of Etruscan art, although some earlier inscriptions mention her name.

Vanth has no direct counterpart in Greek mythology, and is very frequently, but not always, seen winged. Although Vanth has no real Greek counterpart, she has been compared to the Greek Furies, the Erinyes, especially in older publications. This is an unlikely association since she is almost always shown in Etruscan iconography to be a benevolent guide, not an avenging spirit, which the Furies often represent. Her other attributes include the possession of a torch, key, or scroll, and she is shown often to be bare-chested with cross-straps across her breast, adorned with fur boots, a rolled short chiton, and sometimes with unattached sleeves. In fact, her dress has been attributed by Scheffer as specifically the dress of a huntress.

Vanth is involved in a variety of different types of scenes in Etruscan art; the most common types associate her presence with occasions of slaughter and murder, including scenes from the Trojan cycle. Occasionally she is shown rising up out of the ground in such contexts, as seen on an ash urn from Chiusi. Sometimes she is even shown as a solitary figure decorating the sides of ash urns. Other scenes in which Vanth is present involve the meeting and escort of the dead, in the role of psychopompos, who are either walking or being transported on horseback, wagon, or chariot.

In general, Vanth is associated with death and the journey of the deceased to the Underworld, but in a variety of different ways; she is present in scenes of the moment of death as well in scenes where the deceased is already fully dead and journeying to the Underworld. She is depicted as a benevolent psychopompian figure, in contrast to the menacing Charun, her sometime companion.

The materials that Vanth is identified as carrying, which include a torch, key, scroll, or sword, also relate to her role as a guide in the Underworld. The torch can be used to light the way for travellers to the Underworld, although some scholars interpret it as a status symbol or as an indication of office,[8] and the key unlocks its doorway. Additionally, the scroll may reveal more about Vanth, as one instance actually displays her name inside, vanθ.[9] Vanth has been interpreted as a goddess of fate, and using this association, the scroll may contain the destiny of the deceased. However, in total, Vanth is depicted as a young, vibrant female chthonic figure, sometimes in the company of other Vanths, and sometimes with Charun; she is a figure who assists with the journey of the deceased to the underworld.

Orcus in astrology is all about: Get Real! 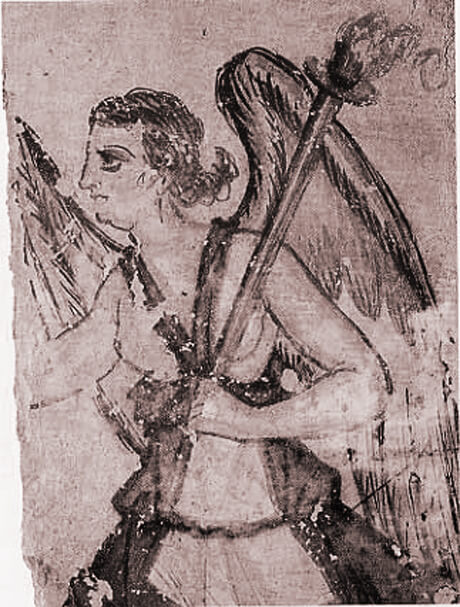 Like Pluto, Orcus-Vanth (MPC-number 90482) is a binary Plutino. Orcus measures about 917 km in diameter and Vanth measures about 276 km. Orcus was discovered on February 17, 2004 by Michael E. Brown, Chadwick A. Trujillo and David L. Rabinowitz. The planet is named after the Etruscan underworld god Orcus while Vanth received the name of the psychopompus (soul accompanying demon) Vanth. Orcus is the first Plutino next to Pluto to which an entire astrology book was devoted (Orcus by Jeremy Allan Neal).

At its deepest core, Orcus-Vanth has something in common with a Pluto/IC conjunction or Pluto in the 4th house. Therefore this binary challenges us to achieve an absolute self-integrity despite all influences from the outside world, the past or family karma’s or other distractions. Thus Orcus-Vanth can act as some kind of personal point zero, purifying our own individuation process to get it moving in order to get real meaning and satisfaction in life. Most people never ever learn to drive on this personal road. As a result their true self is always separated from their option for happiness and fulfillment and their true will is replaced by opportunistic lights at the end of the tunnel.

Orcus-Vanth, when strongly aspected, also sustainably poses the question to what extent we really do what we want and to what extent we build illusions or lie to ourselves. When the overall horoscope is negative and especially when Orcus-Vanth is afflicted in a positive sign in a positive house the self denial can lead to extreme cold, very condemning and or cruel behavior towards others, as the deepest frustration possible for a human being is then projected outside. Logically this core quality then has everything to do with feeling free or imprisoned. The mantra of Orcus is Get real! If this is not understood, we see its divine options for a sublime self-transformation distorted and projected on the other, holding him or her unjustified responsible for ones own chronicallyfrustrated position, which in excess can lead to extreme cruelty and injustice. There is a clear link between Orcus and torture in this connotation, especially if it can be excused as some form of revenge. The conjunction Mars with 1999 TD10, which merges invasion with personal will, own initiative and action-energy, in the Discovery Horoscope, is directly related to this.

Rhiphonos is an important Centaur who, when dominant in your chart or during a progression or transit, will ask you the question: “Are you a man or a mouse?” Thus a transit Orcus-Vanth – Rhiphonos (within 1 degree), especially the conjunction or opposition will certainly give you a kind of inner crisis or reality check. And depending on your courage and honesty during this transit you may emergy reborn from this crisis with a potentially bright future ahead or you start your first day walking the dead end road of prolonged dissatisfaction and frustration leading to nowwhere or a disease that shows your non-life of institutionalized cowerdness and lack of self-integrity its divine mercy.

Orcus in astrology akins Pluto on the IC

Orcus-Vanth has in common with Pluto-Charon that the planet, if prominently aspected, for example in conjunction with the Sun, ruler or the Ascendant, this Plutino gives a kind of “mysterious authority” (Pluto sextile Ascendant trine cusp 7 in the Discovery Horoscope), as well as a certain imperturbability. For example, Clint Eastwood, who portrays this feature almost as a caricature has his ruler Mercury conjunct Orcus-Vanth. Jeremy Allan Neil’s research relates Orcus-Vanth to, among other things, unshakeable straightforwardness, including keeping your word against all odds. The god Orcus watched over the oath and punished the oath-breaker. He also relates the Plutino to cruelty, war crimes, death, dehumanisation, freedom & captivity issues. Orcus-Vanth is indeed strong in the horoscopes of many Nazi criminals, including the virologist Erich Traub (square Sun and conjunct Hidalgo), who later, through Action Paperclip, could continue his work (using animal viruses for biological warfare) on Plum Island. He is a prime suspect in the creation of Lyme Disease. During the discovery, Orcus-Vanth was under the influence of the star Alphard (poisonings) in 24°53 Leo.

In forensic astrology Orcus-Vanth may denote: Clint Eastwood types; sex in relation to mirrors; incubi-succubi-issues, the Lilith-theme; invasion/acquisition of someone’s personal will, freedom or personall expressed power, either active or passive, whereby one becomes a victim of this (being imprisoned); situations in which death and destruction are sown; prunery; revenge aimed at pedophiles, especially pedophiles who raped teenage girls. The orbital period of Orcus-Vanth is 247 years and 354 days.