Typhon in astrology and the Fukushima disaster

The meaning of Typhon in astrology is very explicit. This rather infamous astrological newcomer is classified as a SDO annex Binary Extended Centaur. Typhon was discovered automatically on February 5, 2002, by Near-Earth Asteroid Tracking (NEAT), and is currently estimated at 162 km in diameter. Its moon Echidna was discovered in 2006 and measures 89 km. Echidna orbits Typhon at ~1300 km, completing one orbit in about 11 days, thus forming, together with Typhon, a large object and making it the first discovered binary system within the Centaur class.

In Greek mythology, Typhon, or Typhée (in ancient Greek Τυφάων / Tupháôn or Τυφωεύς / Tuphôeús, from τῦφος / tûphos, “the smoke”), is a primitive evil deity. He is the son of Gaia (the Earth) and Tartarus. According to legend, Typhon is considered to be the Titan of strong winds and storms.

However, another tradition (Homeric Hymn to Apollo) rejuvenates him for several generations by making him a demon born of Hera without any male help. Dissatisfied to have seen Zeus give birth to his daughter Athena alone (by devouring her pregnant mother), she would have summoned Gaia, Cronos and the Titans to give birth alone to a male child more powerful than the other gods, and would have been obeyed. This post-hesiodic tradition linked to the Apollo cycle also reports that it is to another monster, the female dragon Python, that Hera entrusted Typhon.

The meaning of Typhon in astrology

Typhon in astrology stimulates: fighting your way in, situations in which one has to prove oneself for the admission; perseverance, ausdauer; intense energy; a hate of control; the dark side, the magical, black magic, a devilish character; emotional shocks, knocking things over, iconoclasm, sex drive, fetishism, disrupting a system or homeostasis; to work yourself up, fighting oneself free from being insignificant, being resolutely ambitious.

The positive Typhon acts a bit like a mental/emotional crowbar which can help you to break out of a farce and put you on track again. In the birth chart, on a deeper psychological level, Typhon indicates – by means of especially the conjunctions and oppositions -, what we fear to manifest ourselves, or in ourselves, or what we run away from, until the built up tension can no longer be suppressed. Then these displacements tend to manifest themselves as emotional eruptions, which, in a positive way, can act as a prelude to a new phase of life which demands a more complete and authentic existence.

Typhon links this to daring to face the monstrous, confronting the monstrous, to wandering through the dark, the risk area, relying only on one’s own will and strength (tests of courage). Typhon clarifies the areas of tension between the conditions, needs and requirements for our individuation process and the social obligations to the outside world and keeps on struggling until a balance is reached. “Monsters” are also creative (as they are so wonderfully out-of-the-box). Typhon often increases creativity, daring and originality.

Mundane, Typhon is prominent in major disasters (including Fukushima), earthquakes, seaquakes, riots, strikes, rebellion, especially in afflictions by Black Moon, Uranus, and Eris. The orbital period is 236 years and 256 days.

Typhon and other missing links in the Fukushima disaster chart

A series of catastrophic accidents and serious incidents at the Japanese nuclear power plant Fukushima Daiichi (Fukushima I) and their consequences are described as the Fukushima nuclear disaster.

The series of accidents began on 11 March 2011 at 14:47 (local time) with the Tōhoku earthquake and occurred simultaneously in four of six reactor blocks. Core meltdowns occurred in units 1 to 3. Large quantities of radioactive material – about 10 to 20 percent of Chernobyl’s radioactive emissions – were released and contaminated air, soil, water and food in the land- and sea-side environment. About 100,000 to 150,000 inhabitants had to leave the area temporarily or permanently. Hundreds of thousands of animals left behind on farms starved to death. Human casualties due to radiation exposure, however, have not been reported.

On the basis of an estimate of the total radioactivity of the released substances, the Japanese nuclear regulatory authority classified the events on the International Nuclear Event Evaluation Scale with a maximum level of 7 (“catastrophic accident”).

In many countries, the reporting of the disaster led to greater scepticism or a change in sentiment at the expense of the civilian use of nuclear energy. Several countries abandoned their nuclear energy programs. 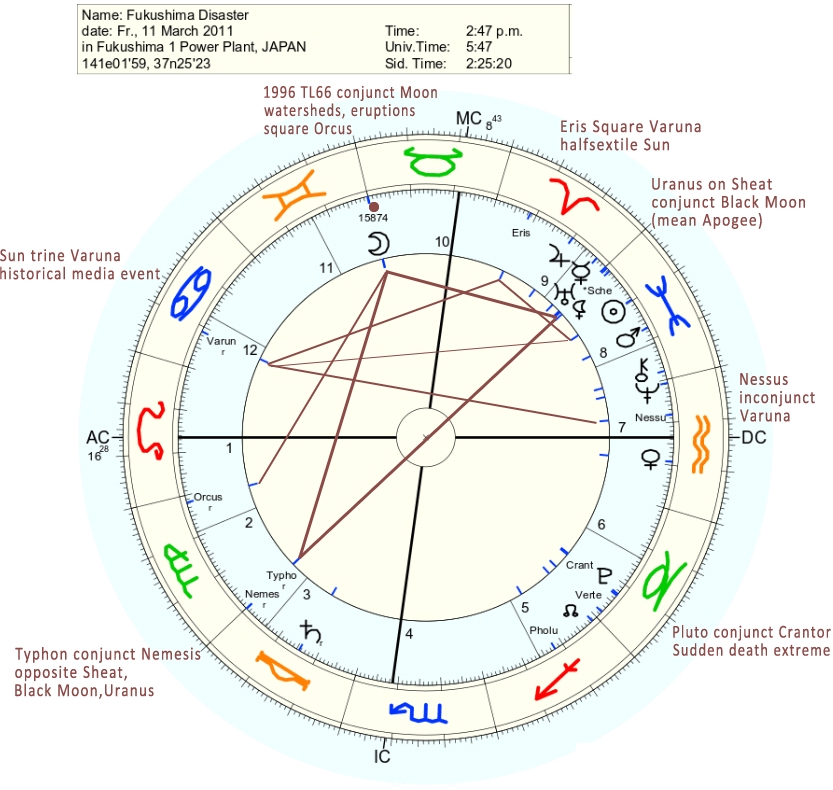 Typhon in astrology presenting the worst part of its alter ego: Chart of the Fukushima disaster emphasizing the missing asteroid-factor. We notice Uranus (linked to uranium and its applications) in the anaretic of Pisces, on disaster star Scheat and conjunct the Black Moon in hard opposition Typhon (earthquakes, seaquakes, tzunamis, floods)/Nemesis (fatal event or bad news). In addition: Moon is conjunct SDO 15874 (1996 TL66), among other associations linked to watersheds and eruptions, square Orcus (death). Pluto is conjunct Crantor (sudden ending or death). Sun is trine Varuna (big news that lasts for decades in the media) while Varuna is Squared by Eris which colors the big news with extreme trouble or strife.