“Nessus in astrology” is an upcoming search term in astrology circles on the Internet. This was expected by those already working with this Centaur. Just like the now widely accepted and introduced Chiron, most asteroids of the Centaur-class represent a certain mixture of wound and blind spot. This is also true of Nessus. What sets Nessus apart from many other objects of its class is the fact that this Centaur often projects its inner drama into the outside world, causing wounds as searing as the creature from Greek mythology for which it was named. Among other criminal urges, this nonetheless rather complex Centaur is associated with rape, sexual abuse, burglary, and hacking. 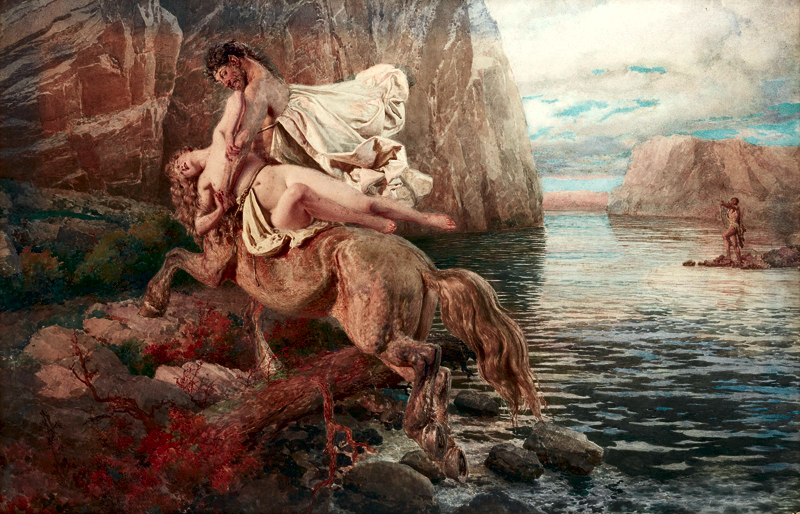 Hercules slaying Nessus the Centaur by Fortunino Matania (1881 – 1963) – Nessus in astrology resonates strongly with the Nessus-of the ancient myth.

Nessos (ancient Greek Νέσσος Néssos, Attic Nettos and Netos, Latinized Nessus) is a centaur in Greek mythology. He is the son of Ixion and Nephele. who desires Deïaneira, the wife of Heracles, and kidnaps her. For this he is killed by Heracles. (Deianira, Deïanira, or Deianeira – Ancient Greek: Δηϊάνειρα, Dēiáneira, or Δῃάνειρα, Dēáneira – also known as Dejanira, was a Calydonian princess whose name translates as “man-destroyer” or “destroyer of her husband”.)

Heracles had to cross a river with his second wife, the king’s daughter Deïaneira. Nessos offered to carry the young woman across dry-footed on his back, but then galloped off with her. Heracles acted quickly and shot one of his deadly arrows, poisoned with the blood of the Hydra, after him and hit him. Before Heracles had approached, as Nessos lay dying, he gave Deïaneira a treacherous advice: “Catch a little of my blood and keep it. If you fear losing Heracles’ love, soak his robe with it and he will never look at another woman but you.” His blood, however, was poisoned by the arrow of death.

Years later Deïaneira suspected her husband had a crush for a beautiful young woman called Iole. Becoming jealous she had Heracles’ servant Lichas deliver to him the rope she had soaked in blood. Immediately, the hero was struck by excruciating pain. He tried to take off the shirt, but it had firmly attached itself to his skin and so he tore off his flesh at the same time. Deïaneira then killed herself out of despair.

In order to put an end to his unbearable torment, Heracles built a funeral pyre on Mount Oite, which had once been proclaimed as the place of his end by the Oracle of Delphi, and had himself burned alive on it by Philoctetes. Thus an old prophecy came true that he would die because of someone who was no longer alive. But he was raptured from the flames to Olympus, where he – as the only one among the mortals – was granted immortality. His torment finally pacified Hera, who had been persecuting him since his birth, because he was the son of her husband Zeus with Alcmene. Finally Heracles was married to Hera’s daughter Hebe, the goddess of youth. 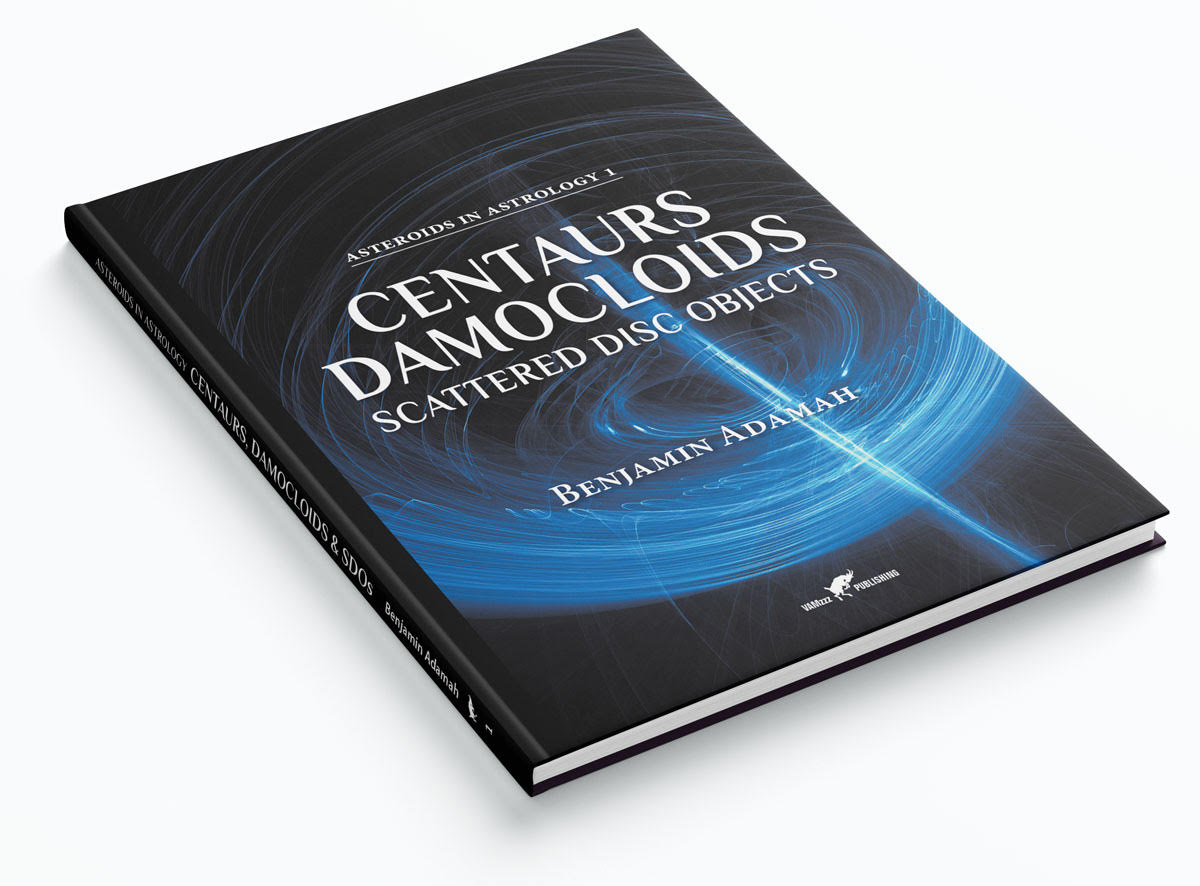 The difficulty in expressing oneself in relation to the other

Nessus is a lump of ice of about 60 km in diameter, discovered on April 26, 1993 by David L. Rabinowitz in 5° Scorpio. This Centaur involves a lot of what you might summarize as third chakra issues, and it usually has a disorderly sexual imposition. Keywords such as sexual assault, abuse and rape cover many of Nessus’ charge on the negative side. I repeatedly noticed a damaged Nessus in the fourth house in the charts of women who were sexually abused in childhood.

The core issue of a dominant Nessus is the difficulty in expressing oneself in relation to the other, because somehow one has the feeling or illusion that the other person wants to invade the personal privacy of one’s own being. Paradoxically this is unconsciously or consciously reacted to by crossing the personal boundaries of the other. The deformation in Nessus’ communication is therefore connected to the concept of forcibly accessing someone’s psychic and energetic or even physical being.

A Centaur with a schizoid twist

Then there is a schizoid twist in Nessus due to the conjunction of Mercury with the Plutino 2002 VR128 trine Chiron in the discovery-chart, which balances Nessus’ raw, brutal and sinister expression with a very human and spiritual mind and sensitivity. Therefore, due to this contrast – and only second to the notorious Pylenor -, Nessus is one of the most dramatic and dark romantic of all Centaurs. Several researchers have associated Nessus with the Beauty & The Beast theme.

Others have noticed links with schizophrenia, psychoses, occultism, prolonged skin diseases. The energy of the 8th house is very strong in Nessus and to make things worse Nessus often has an obsessive tendency to want to put things right, often coupled with the urge to do this openly and very demonstratively. This is a consequence of the conjunction Rhadamantus / Hylonome on cusp 9 in the discovery horoscope. Underneath, and when not self sabotaged by emotional aberrations, Nessus wants to work his way up and is very ambitious, as indicated by Nessus’ position almost exactly opposite Sun in the discovery-chart. 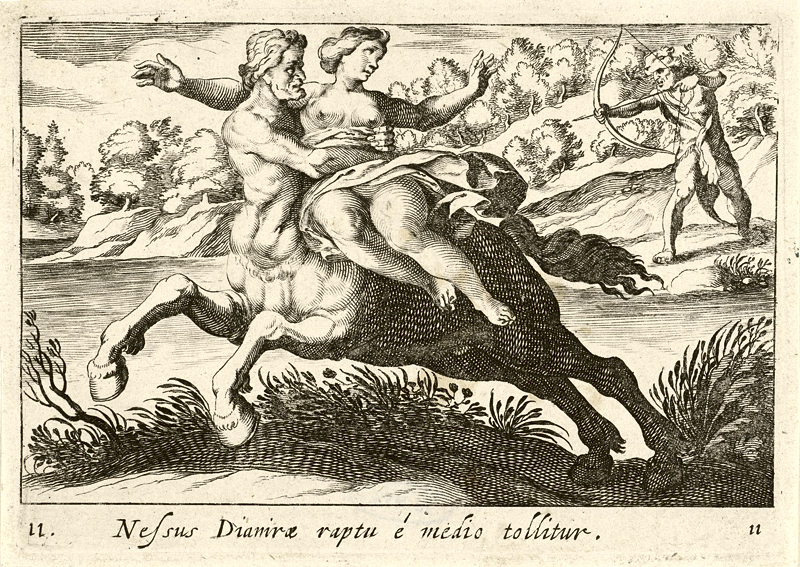 The meaning of Nessus in astrology

Nessus is one of the few newcomers in astrology that has been observed and studied for quite a while. Considering its complex and rather extreme nature, it is no wonder we see a large diversity in the collection of attributed characteristics; lessons in setting boundaries, seeing (one’s own) limits, accepting limits; identification of hidden abuse patterns; complex cause and effect relationships, breakpoints in karmic cycles; revealing the truth, resolving a situation; taking responsibility for a confrontation, the perpetrator caught; desire; possessiveness, jealousy, being vindictive, manipulative or resorting to black magic for sexual or financial needs. Finally, several researchers associate Nessus with blood, diseases passed on by blood, or blood rituals, and superhuman strength or powers.

My experience with Nessus transiting in hard aspect to the Sun is that this Centaur evokes an inner transformative crisis that demands clarity and decisive action based on “cut the crap”. In the personal horoscope Nessus can be a player with violent impact. Forcing entry seems to be the core quality of this Centaur.

In harmonious aspects, this gaining access goes pretty easy, while in hard aspects, where access is denied, it has to be forced open and in extreme cases violence is used. Thus, in line with these characteristics, Nessus also has to do with breakthrough, breakout, escape, rescue and hacking.

Computer hacking is a Nessus-thing pur sang, especially when combined with Mercury, Uranus, Vesta or Makemake. Also espionage, spies, officers, burglars, rapists, rape in general – mentally or emotionally -, black magic, executioners, cracking a closed system (be it a nut or oyster or bank vault, or mind frame), assassins and police raid teams reside under Nessus. The Centaur has an orbital period of 122 years and 153 days.