Allan Kardec: Life after death as a science…

Allan Kardec, or Alan Kardec, whose real name is Hippolyte Léon Denizard Rivail, was born in Lion on October 3, 1804 and died on March 31, 1869. He was a French pedagogue and a founder of spiritualist philosophy or spiritualism. He is generally referred to as the “codifier of spiritualism”. His work today strongly influences Brazilian culture and public life, especially the Afro-American religions and concepts about the work with spirits in magic. 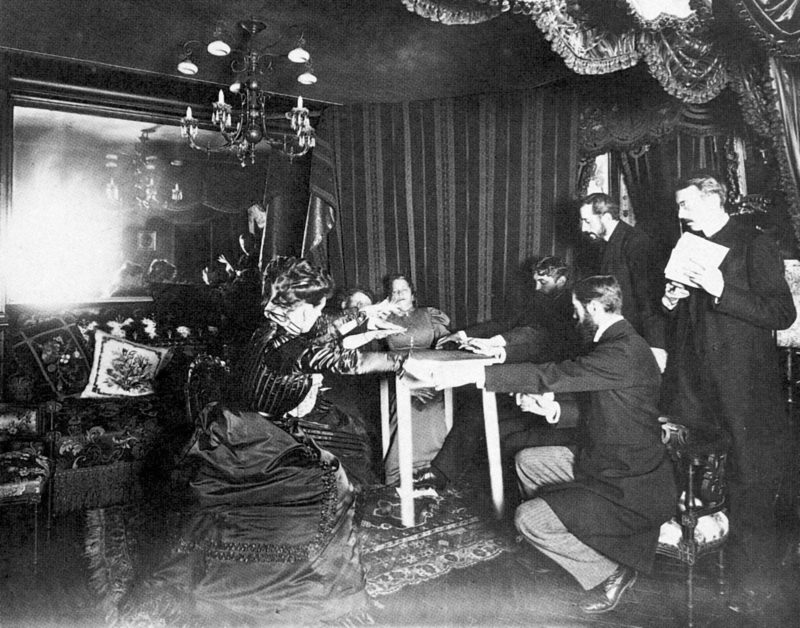 Seance in the old days

Rivail was raised as a Roman Catholic and attended the local primary school until he was ten years old, but his wealthy bourgeois family sent him away from the troubles of the late Napoleonic era to finish his studies abroad. He became an intern at the Château d’Yverdon, on Lake Neuchâtel, with the pedagogue Johann Heinrich Pestalozzi, who then put into practice the principles of Émile de Rousseau. In this “mutual school”, he studied with other young people from the better class of European society. He learned to speak German, English, Italian, and Spanish fluently, in addition to his native French.

At the beginning of his life, he worked as a teacher and disciple of the education-reformer Johann Heinrich Pestalozzi. He brought his ideas and his type of school to France. In 1820, he moved to Paris and in 1824, at 35 rue de Sèvres, opened a private course based on Pestalozzi’s methods. He published numerous educational works, including a proposed Plan for the Improvement of Public Education (supported by Ampère, his compatriot from Lyon) which received a prize from the Royal Academy of Arras in 1828. In 1832, he married Amélie Boudet, also a teacher, who worked with him in his school and in the pursuit of his educational work. When the school had to close for financial reasons, Rivail translated German texts and published textbooks to earn a living. He continued to give free courses in chemistry, physics, anatomy, astronomy.

In 1839, with a new partner, Mr. Maurice Delachatre, a merchant, he created a so-called “exchange” bank, which aims to facilitate commercial transactions and thus create new opportunities for trade and industry, in order to support in default of pecuniary resources for the natural products. The duration of the trading bank will be fixed by the Chamber of Commerce and Industry at ten years.

In May 1855, he met a certain Mr. Fortier, a magnetizer, who took him to Madame de Plainemaison, a medium who lives on rue de la Grange Bateliere in Paris, just a step away from the opera house. In the presence of other guests for the session, He enters into communication with a spirit named Zephyr, who gives him the mission of being the spokesman of the Dead. For him, it’s the revelation. He was there, for the first time, witnessing the phenomenon of turntables, jumping and running, as he himself described on his manuscript written between 1855 and 1856 : “My predictions concerning spiritualism”.

Rivail was in his early 50s when he became interested in séances, which were a popular entertainment at the time. Strange phenomena attributed to the action of spirits were considered a novelty, featuring objects that moved or “tapped”, purportedly under the control of ‘spirits’. In some cases, this was alleged to be a type of communication: the supposed spirits answered questions by controlling the movements of objects so as to pick out letters to form words, or simply indicate “yes” or “no”. At the time, Franz Mesmer’s theory of animal magnetism had become popular. When confronted with the phenomena described, some researchers, including Rivail, pointed out that animal magnetism might explain them. Rivail, however, after seeing a demonstration, dismissed animal magnetism as insufficient to explain his observations.

As a result of these influences, Rivail began his own investigation of psychic phenomena, mainly mediumship. During his initial investigation, he stated that before accepting a spiritual or paranormal cause for some phenomena, it would be necessary first to test if ordinary material causes could explain them. He proposed that fraud, hallucination and unconscious mental activity might explain many phenomena regarded as mediumistic, and also proposed that telepathy and clairvoyance may be responsible. 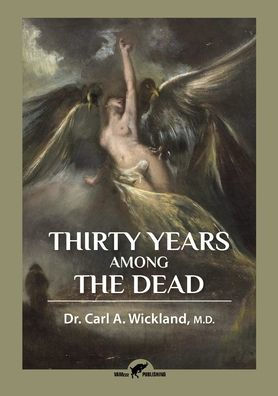 He compiled over one thousand questions concerning the nature and mechanisms of spirit communications, the reasons for human life on earth, and aspects of the spiritual realm. He asked those questions to ten mediums, all purportedly unknown to each other, and documented their responses. From these, he concluded that the best explanation was that personalities that had survived death were the source of at least some mediumistic communications. He became convinced that the mediums:

• provided accurate information unknown to themselves or others present (e.g. personal information about deceased individuals);
• demonstrated unlearned skills such as writing by illiterate mediums, handwriting similar to the alleged communicating personality, and speaking or writing in a language unknown to the medium (xenoglossy and xenography);
• accurately portrayed a range of personality characteristics of deceased individuals.

He compiled the mediums’ responses that were consistent and adapted them into a philosophy that he called Spiritism, which he initially defined as “a science that deals with the nature, origin, and destiny of spirits, and their relation with the corporeal world.” It was at this time that he took his nickname “Allan Kardec”, a name he thought corresponded to the one he had in a previous life, when he was a Druid, allegedly following the suggestion of a spirit identified as Truth.

On 18 April 1857, Rivail (as Allan Kardec) published his first book on Spiritism, Le Livre des Esprits (The Spirits’ Book), comprising a series of answered questions (502 in the first edition and 1,019 in later editions exploring matters concerning the nature of spirits, the spirit world, and the relationship between the spirit world and the material world. This was followed by a series of other books, including Le Livre des médiums (The Book of Mediums), published in 1861. He also started a periodical, the Revue Spirite, which Kardec published until his death. Collectively, the books became known as the “Spiritist Codification”. Kardec’s research influenced the psychical research of Charles Richet, Camille Flammarion and Gabriel Delanne.

Allan Kardec died of an aneurysm in 1869, leaving many texts in the process of being written. A sixth book, whose working title was: Forecasts of Spiritism, was also found. All these unfinished works were grouped together by the publisher Pierre-Gaëtan Leymarie a few years later and published under the title : The posthumous works of Allan Kardec.

He is buried in the Père-Lachaise cemetery in Paris. On the frontispiece above his dolmen-shaped tomb and his polished bronze bust sculpted by Paul-Gabriel Capellaro, is engraved the postulate of the doctrine: “To be born, to die, to be reborn again and to progress without ceasing, such is the Law“. On the stele supporting the bust, we read: “Every effect has a cause, every intelligent effect has an intelligent cause, the power of the cause is because of the size of the effect.” It was Camille Flammarion who pronounces his eulogy and affirms, like Kardec, that “spiritualism is not a religion, but it is a science…”. His tomb at Père-Lachaise cemetery remains a place of meditation, it is one of the most flowered and visited in the cemetery. Mediums and followers of various spiritual currents regularly come to seek inspiration on the bust of Allan Kardec, reputed to be able to grant all types of wishes

According to Kardec: “Man is not only composed of matter, there is in him a thinking principle related to the physical body he leaves, as one leaves a worn garment, when his present incarnation is completed. Once disembodied, the dead can communicate with the living, either directly or through mediums in a visible or invisible way “(The Book of Spirits).

Many personalities were attracted to spiritualism, such as Victor Hugo, Théophile Gautier, Victorien Sardou, Camille Flammarion or Arthur Conan Doyle. They were convinced that spiritualism could provide scientific proof of life after death. After Kardecs’ death, his work was continued by Léon Denis (1846-1926), Gabriel Delanne (1857-1926), Chico Xavier (1910-2002), and Divaldo Pereira Franco (1927-).

Nowadays, Allan Kardec is one of the most widely read French authors in Brazil with more than thirty million books sold. More than six million Brazilians declare themselves to be spiritualists and apply Kardec’s doctrine in thousands of spiritualist centers. Many Brazilian cities have an Allan Kardec street and often even several like São Paulo (6), as well as an Allan Kardec college. Several Brazilian primary schools also bear the name of the founder of the spiritualist doctrine. Brazilian deputies have dedicated sessions of the National Assembly to Allan Kardec and his work.

At the global level, movements claiming to be Kardecist spiritism are federated by an International Spiritist Council that has several media (TVCEI, Radio Kardec, La Revue spirite…). Several hundred spiritualist centres and associations throughout the world now bear the name of Allan Kardec and perpetuate his teaching. In addition, the antoinist cult and caodaism are other religious movements directly inspired by Kardec’s spiritual philosophy. Kardec’s work has also a substantial influence on Candomble and Umbanda. 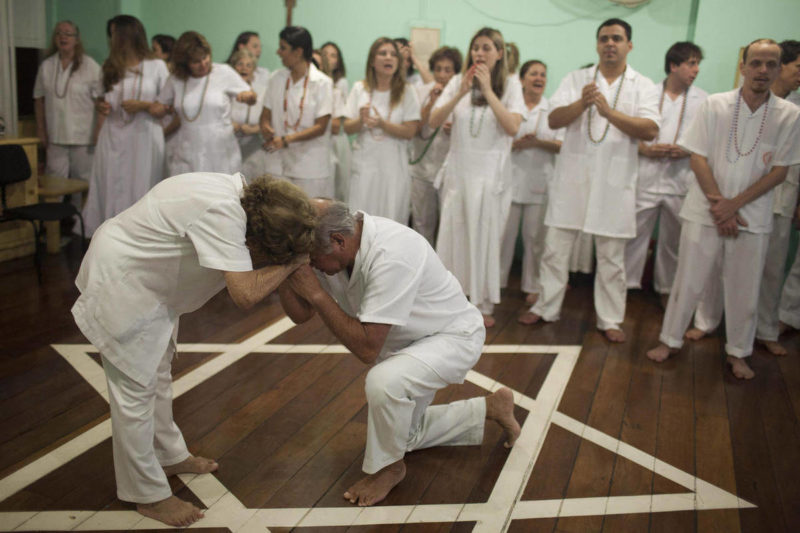 Umbanda ceremony in Brazil. Umbanda and Candomble are strongly influenced by Allan Kardec.

A movie was made based on Kardecs’ book. Kardec. O Filme dos Espíritos is a 2011 Brazilian drama film directed by Michel Dubret and André Marouço, based on the book The Spirits Book by Allan Kardec. The movie was released in Brazil on October 7, 2011 in celebration of the birthday month of Kardec. The movie follows the story of Bruno Alves (Reinaldo Rodrigues) who, by the age of 40, loses his wife. The loss of his job adds to its deep sadness and suicide seems the only way out. That’s when he meets The Spirits Book, work of the spiritist doctrine.

Aura protection – How to protect your energy field from negative influences
Astral and aura colors and what they meanSex and Mediumship – quotations on the observation of ectoplasma
Poltergeist
Thirty Years among the Dead
animal ghosts and apparitions
Black dog apparitions
The real vampire in Russia and Slavonic countries
The incubus or succubus – nightmare or astral sex date?
Thought forms – Thoughts condensed on purpose or by accident
Top 7 techniques for inducing an Out of Body Experience (OBE)