Umbanda is a syncretic Brazilian religion that blends African traditions with Roman Catholicism, Spiritism, and Indigenous American beliefs. Although some of its beliefs and most of its practices existed in the late 19th century in almost all Brazil, it is assumed that Umbanda originated in Rio de Janeiro and surrounding areas in the early 20th century, mainly due to the work of a psychic (medium). 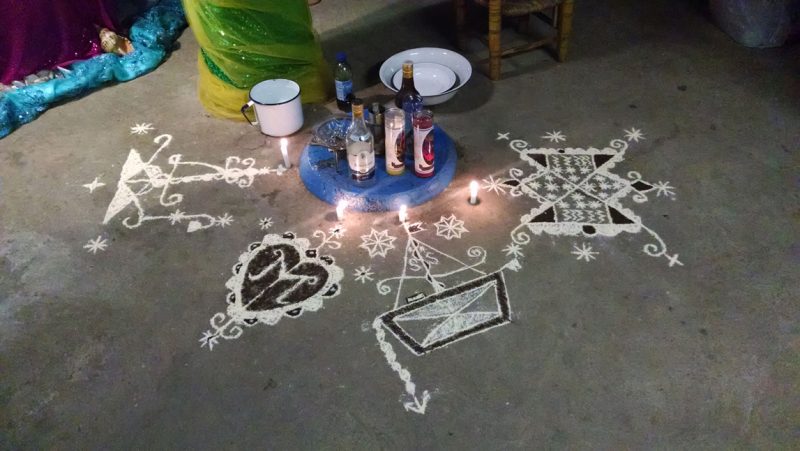 This medium, Zélio Fernandino de Moraes, practiced Umbanda among the poor Afro-Brazilian population. Since then, Umbanda has spread across mainly southern Brazil and neighbouring countries like Argentina and Uruguay. Umbanda has many branches, each one with a different set of beliefs and practices. Some common beliefs are the existence of a Supreme Creator known as Olodumare. Other common beliefs are the existence of deities called Orixás. Most of them, like in Voodoo, syncretised with Catholic saints that act as divine energy and forces of nature; spirits of deceased people that counsel and guide practitioners through troubles in the material world; psychics, or mediums, who have a natural ability that can be perfected to bring messages from the spiritual world of Orixás and the guiding spirits; reincarnation and spiritual evolution through many material lives (karmic law) and the practice of charity and social fraternity.

Umbanda practitioners believe in a supreme creator god; the use of a medium to contact the spirits of deceased people; reincarnation and spiritual evolution through many physical existences; and the practice of charity. The opposite side of the Umbanda (white magic), i.e., black magic – the practices that intended to cause evil doings, became known as Quimbanda. Umbanda is juxtaposed with Quimbanda which now reclaims its identity as a separate religion and distinct from Umbanda. One hundred years after its establishment, Umbanda divided itself into several branches with different beliefs, creeds, and practices. Some of these branches are Umbanda d’Angola, Umbanda Jejê, Umbanda Ketu, and Umbanda Esotérica.

Quimbanda is an Afro-Brazilian religion practiced primarily in the urban city centers of Brazil. Its practices are typically associated with magic, rituals with Exus, and Pomba Giras spirits. Quimbanda was originally contained under the religious tradition of Macumba. Quimbanda however, rejected Catholic and Kardecist Spiritist influences that have penetrated Umbanda and other Afro-Brazilian religions and regards itself as a separate religion.

In Quimbanda the male spirits are known as Exus, they are considered very powerful spirits whose name were borrowed from the deity Exu.

In Quimbanda the male spirits are known as Exus, they are considered very powerful spirits whose name were borrowed from the deity Exu. Exus refers to the phalanx of spirits. Exus, commonly referred to as ‘spirits of the left’, are not purely evil. Instead, they are more human-like in their qualities and share in human weaknesses. Exu spirits primarily deal with human and material matters as opposed to the ‘spirits of the right’ used in Umbanda, who deal with primarily spiritual matters. Exus are typically called for rituals to arrange rendezvous, force justice, or keep life balance.

Another set of deities associated with Quimbanda is not directly derived from the Yoruba religious tradition. Pomba Giras, the female counterparts of Exus. Prominent Pomba Giras such as Pomba-Gira Maria Mulambo, also known as Maria of the trash, are used for specific rituals often relating to their names. Mulambo refers to someone who is wearing ragged clothing or someone who is very unlucky. Therefore, Pomba-Gira Maria Mulambo is summoned to overturn or destroy someone and make them a mulambo.

Ogum is the orisha of warfare and metal. Ogum is also known as the Lord at the center of the crossroads. Rituals involving Ogum are typically less aggressive and more justice-bound than that of Exu. Prof David J. Hess speculates that Ogum acts as an intermediate figure between the rituals of Exu in Quimbanda and the rituals of Umbanda, revealing the deep connection between Quimbanda and Umbanda. 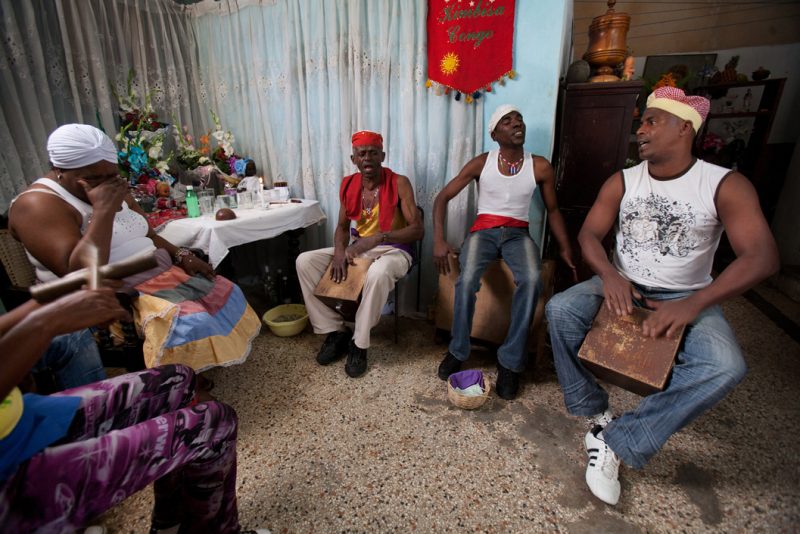 Santeria is a religion that evolved in Cuba. It is rooted in the African religious traditions of the Yoruba people (found in modern-day Nigeria). The followers of Santeria worship the Orishas, the demi-gods of the Yoruba people. While there is a veneer of Spanish Catholicism for the outsider, that element quickly drops away once a person has undergone initiation. The primary involvement of the Catholic elements in Santeria is found in Espiritismo, a separate religious practice that has been deeply interwoven into Santeria in the mid-1900’s.

Santeria is highly initiatory, secretive and operates under strict religious principles. Participation in the religion is very limited to those who are not initiated and the great majority of participants are initiates. In contrary to Voodoo, Santeria does not use veves or ornate drawn symbols to call the Orishas (bullseye-style paintings called osun are used in certain rituals but bear no resemblance to veves). Santeria’s primary liturgical language is Lukumí, a late 1800’s dialect of the Yoruban language interspersed with elements of Cuban Spanish.

The religious proceedings and magical workings of these religious traditions may have similarities, but they are certainly not the same thing.

The religious proceedings and magical workings of these religious traditions may have similarities, but they are certainly not the same thing. A person initiated in Santería will not have the religious rights or permission to participate in voodoo ceremonies like a Voodoo initiate would. A person initiated in Voodoo would not have permission and rights to operate in a Santeria ceremony. Each of these religions is different from one another, and each uses different languages, prayers, songs and rituals from the others. The only commonality between them is the use of animal sacrifice, and the employment of magical spell work as an integral part of their religious practice, but this is common with any religious practice from sub-Saharan Africa.

The first ritual is known as the acquisition of the beaded necklaces (known as elekes); according to De La Torre, “the colours and patterns of the beads on the elekes will be those of the Orichá that serves as the Iyawo’s (bride) ruling head and guardian angel and so the first thing that must be done is to determine who the Orichá is. The elekes necklace is bathed in a mixture of herbs, sacrificial blood, and other potent substances and given to the initiated. The initiate most often receives the necklace of the five most powerful and popular Oricha, as the multicoloured beads of the elekes are each patterned for the primary Orichás (Eleguá, Obatalá, Yemayá, Changó, and Ochún), and they serve as a sacred point of contact with these Orichás.

The individual will go through a consultation with a Santero, where all the recipients’ life, past, present, and future, will be reviewed.

The second important ritual is known as Medio Asiento, the creation of an image of the Orichá Eleguá. The individual will go through a consultation with a Santero, where all the recipients’ life, past, present, and future, will be reviewed. During the consultation, the Santero determines which path of Eleguá the recipient will receive. Then, based on his findings, he chooses materials that will be used to construct the image of the Eleguá, a sculpture that is used to keep evil spirits away from the initiator’s home.

The third ritual, known as Receiving the Warriors, is a ritual where the initiated receives objects from their padrino that represents the warriors; Iron tools to represent Ogún; an iron bow and arrow to represent Ochosi; and an iron or silver chalice surmounted by a rooster to represent Osún. This ritual starts a formal and lifelong relationship that the initiate will have with these Orichás, as the orichás devote their energies to protecting and providing for the initiate on their path.

The last ritual of the initiation process is known as Asiento (ascending the throne), and is the most important and the most secretive ritual in Santería, as it is the ceremony where the Iyawo (bride of the Oricha) becomes “born again” into the faith. This ritual is a culmination of the previous rituals, and cannot be made unless the others have been completed. Asiento is a process of purification and divination whereby the initiated becomes like a newborn baby and begins a new life of deeper growth within the faith. ♦