A mandrake is the root of a plant, historically derived either from plants of the genus Mandragora found in the Mediterranean region, or from other species, such as Bryonia alba, the English mandrake, which have similar properties. 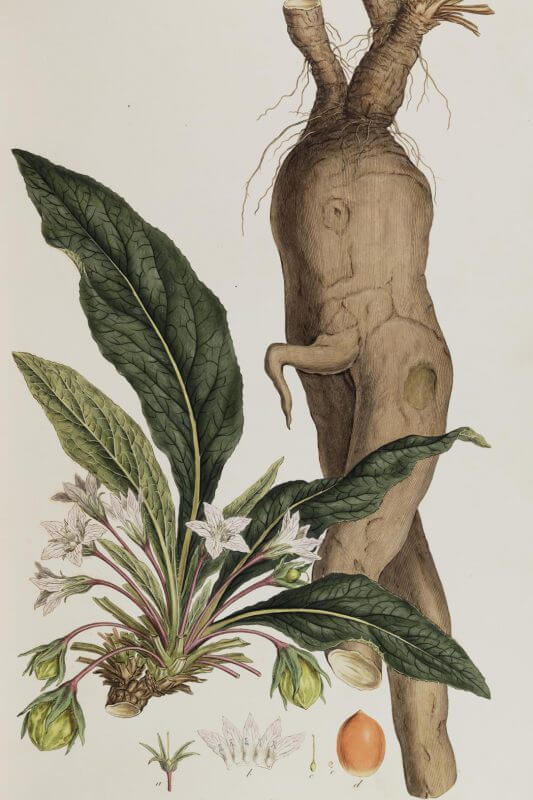 Because mandrakes contain deliriant hallucinogenic tropane alkaloids and the shape of their roots often resembles human figures, they have been associated with a variety of magical associations throughout history. They have long been used in shamanistic rituals, and are still used today in contemporary pagan traditions as Wicca, Odinism and western occultism.

In his work The History and Practice of Magic, Jean-Baptiste Pitois writes:

‘Would you like to make a Mandragora, as powerful as the homunculus (little man in a bottle) so praised by Paracelsus? Then find a root of the plant called bryony. Take it out of the ground on a Monday (the day of the moon), a little time after the vernal equinox. Cut off the ends of the root and bury it at night in some country churchyard in a dead man’s grave. For 30 days, water it with cow’s milk in which three bats have been drowned. When the 31st day arrives, take out the root in the middle of the night and dry it in an oven heated with branches of verbena; then wrap it up in a piece of a dead man’s winding-sheet and carry it with you everywhere.’ 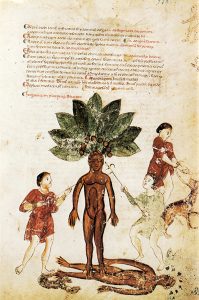 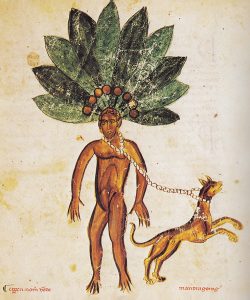 In the past, mandrakes were believed to sprout from the earth beneath a gallows, right on the spot a hanged man had dripped his sperm.

In the past, mandrakes were believed to sprout from the earth beneath a gallows, right on the spot a hanged man had dripped his sperm. Mandrakes were made into amulets for good fortune and cure sterility. However, one had to tie an animal to the root, to pull the mandrake from the soil. Otherwise, it would scream and the soul of the harvester would be condemned to Hell. In the Bible it is mentioned that Leah and her sister Rachel used mandrakes to overcome sterility and become pregnant again. In Hebrew the mandrake is called dûdâ’îm, which means love plant. In medieval times juice from the finely grated root was applied externally to relieve rheumatic pains. It was also used internally to treat melancholy, convulsions, and mania. When taken internally in large doses, however, it could excite delirium and madness. 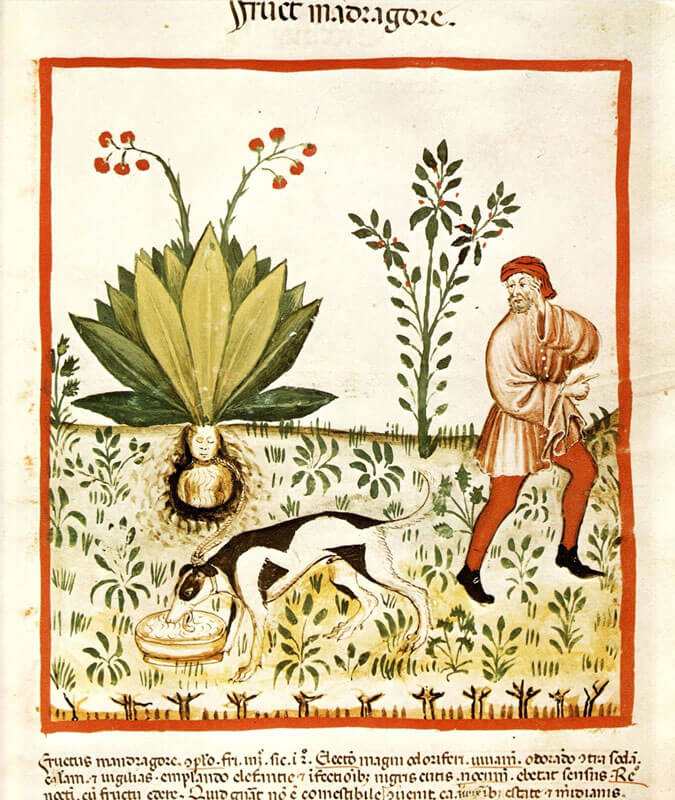 Mandrake tincture is most likely the only relative safe way to experiment with this herb.

The use of mandrakes for medical or hallucinogenic effects are not without danger. All species of Mandragora contain highly biologically active alkaloids, tropane alkaloids in particular. The alkaloids are concentrated in the root and leaves, poisonous, via anticholinergic, hallucinogenic, and hypnotic effects. Anticholinergic properties can lead to asphyxiation. Accidental poisoning is not uncommon. Ingesting mandrake root is likely to have other adverse effects such as vomiting and diarrhoea. The alkaloid concentration varies between plant samples. Clinical reports of the effects of consumption of Mediterranean mandrake include severe symptoms similar to those of atropine poisoning, including blurred vision, dilation of the pupils (mydriasis), dryness of the mouth, difficulty in urinating, dizziness, headache, vomiting, blushing and a rapid heart rate (tachycardia). Hyperactivity and hallucinations also occurred in the majority of patients. 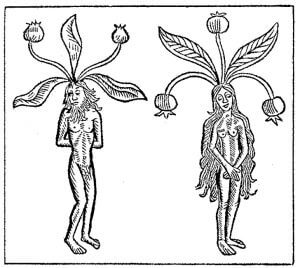 In one of his works on practical magic (Bücher der praktischen Magie, Band VII), the German magician H.E. Douval (pseudonym of Herbert Döhren – 1906-1975), describes two experiments with drops of mandrake tincture. The tincture is most likely the only relative safe way to experiment with this herb, although Douval describes anxiety feelings due to an accelerated pulse, and it cost him a lot of effort to withhold himself from leaving his room and go out, shouting and doing silly things in public. He also describes his worry about a light paralysis effect in his sacrum region, before the first hallucinations, of mostly dark nebula like shapes and phantoms occur. These phantoms and shapes however, change their appearance and nature according to his emotions and gradually he is able to make his visions more light and pleasant.

In his FOLK-LORE and LEGENDS – GERMANY (1892), W. W. Gibbings  included a local anecdote (Magdeburg) about the Mandrake (Alraune in German):
It is a well-known tradition near Magdeburg, that when a man who is a thief by inheritance,—that is to say, whose father and grandfather and great-grandfather before him, three generations of his family, have been thieves; or whose mother has committed a theft, or been possessed with an intense longing to steal something at the time immediately preceding his birth; it is the tradition that if such a man should be hanged, at the foot of the gallows whereon his last breath was exhaled will spring up a plant of hideous form known as the Alraun or Gallows Mannikin. It is an unsightly object to look at, and has broad, dark green leaves, with a single yellow flower. The plant, however, has great power, and whosoever is its possessor never more knows what it is to want money. 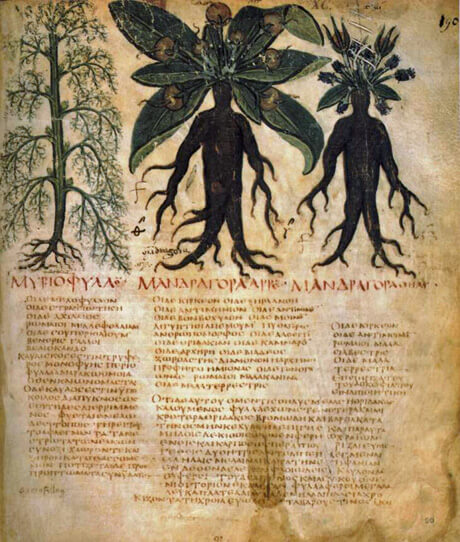 Mandrake in the Codex Dioscurides Neapolitanus, an illuminated Greek manuscript created in the early 7th-century

It is a feat full of the greatest danger to obtain it. If not taken up from the root, clean out of the soil, it is altogether valueless, and he who makes the experiment wantonly risks his life.

The moment the earth is struck with the spade, the bitterest cries and shrieks burst forth from it, and while the roots are being laid bare demons are heard to howl in horrid concert.

When the preparatory work is done, and when the hand of the daring man is laid on the stem to pluck forth his prize, then is it as if all the fiends of hell were let loose upon him, such shrieking, such howling, such clanging of chains, such crashing of thunder, and such flashing of forked lightning assail him on every side.

If his heart fail him but for one moment his life is forfeit. Many a bold heart engaged in this trial has ceased to beat under the fatal tree; many a brave man’s body has been found mangled and torn to pieces on that accursed spot.

There is, however, happily, only one day in the month, the first Friday, on which this plant appears, and on the night of that day only may it be plucked from its hiding-place.

The way it is done is this. Whoso seeks to win it fasts all day. At sundown he sets forth on his fearful adventure, taking with him a coal-black hound, which has not a single fleck of white on its whole body, and which he has compelled likewise to fast for four-and-twenty hours previously.

At midnight he takes his stand under the gallows, and there stuffs his ears with wool or wax, so that he may hear nothing. As the dread hour arrives, he stoops down and makes three crosses over the Alraun, and then commences to dig for the roots in a perfect circle around it.

When he has laid it entirely bare, so that it only holds to the ground by the points of its roots, he calls the hound to him, and ties the plant Greek to its tail. He then shows the dog some meat, which he flings to a short distance from the spot. Ravenous with hunger, the hound springs after it, dragging the plant up by the root, but before he can reach the tempting morsel he is struck dead as by some invisible hand.

The adventurer, who all the while stood by the plant to aid in its uprooting should the strength of the animal prove insufficient, then rushes forward, and, detaching it from the body of the dead hound, grasps it firmly in both hands. He then wraps it up carefully in a silken cloth, first, however, washing it well in red wine, and then bears it homeward. The hound is buried in the spot whence the Alraun has been extracted.

On reaching home the man deposits his treasure in a strong chest, with three locks, and only visits it every first Friday in the month, or, rather, after the new moon. On these occasions he again washes it with red wine, and enfolds it afresh in a clean silken cloth of white and red colours.

If he has any question to ask, or any request to make, he then puts the one or proffers the other. If he wish to know of things in the future, the Alraun will tell him truly, but he will only get one answer in the moon, and nothing else will be done for him by the plant. If he desire to obtain some substantial favour, he has it performed for him on making his request, but then the Alraun will answer no inquiries as to the future until the next day of visitation shall arrive.

Whoso has this wonder of the world in his possession can never take harm from his foes, and never sustain any loss. If he be poor, he at once becomes rich. If his marriage be unblest by offspring, he at once has children.

If a piece of gold be laid beside the Alraun at night, it is found to be doubled in the morning, and so on for any sum whatsoever, but never has it been known to be increased more than two pieces for each one.

On the demise of the owner only a youngest son can inherit the Alraun. To inherit it effectually he must place a loaf of white bread and a piece of money in the coffin of his father, to be buried along with his corpse. If he fail to do so, then is the possession, like many others of great name in the world, of no value to him. Should, however, the youngest son fail before the father, then the Alraun rightfully belongs to the eldest, but he must also place bread and money in the coffin of his brother, as well as in that of his father, to inherit it to any purpose.