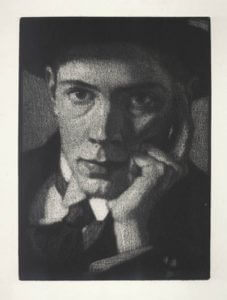 Stefan Eggeler (*December 24, 1894 in Vienna; †July 17, 1969 Vienna) was an Austrian artist and lawyer. As the son of a court official, Eggeler studied law at the University of Vienna and received his doctorate in law. He also studied at the Academy of Fine Arts in Vienna with Ferdinand Schmutzer and Rudolf Bacher and at the Höhere Graphische Bundes-Lehr- und Versuchsanstalt with Ludwig Michalek.

Between 1915 and 1925 he produced drawings, graphic works and portfolios, woodcuts and etchings, which were often published as book illustrations. He was a member of the Künstlerhaus Vienna and a representative of early Austrian “Phantastik”. In 1925 Eggeler abruptly ended his artistic career and became legal advisor to the municipality of Vienna. A regrettable loss for the world of art as Eggeler was a brilliant artist who depicted interesting subjects in a very distinguished style.

Amongst the rarest of all items of drug literature is Kokain Eine Moderne Revue, a literary journal published in Vienna 1915-1925. Only five issues were created. Kokain was edited by Fritz Bauer (not the notorious Nazi jurist). It featured many contributions by women, and was highlighted by the cover art, graphic design and erotic lithography of Stefan Eggeler. Issue number 3 was even confiscated by the Viennese authorities because one of the stories within, Im Kellerloch (In the Cellar Hole) by Erwin Stranik which contained a particularly graphic description of a sexual act. The story was however republished in issue 4 in which Stranik reacted on the confiscation with an essay entitled, Was ist Kunst und was ist Pornographie? (What is Art and what is Pornography?). 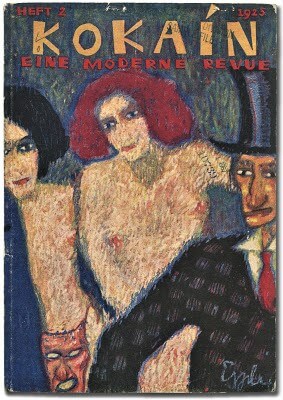 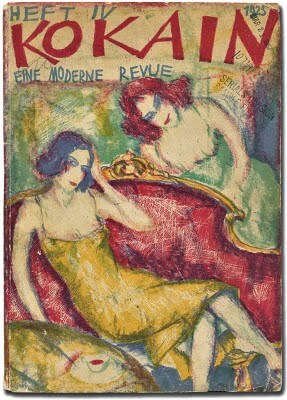 Walpugisnight (Walpurgisnacht) is especially important in the German folklore tradition. On mayday eve witches were believed to ride out on animals or fly on broom sticks to the sabbat for a special celebration. Gustav Meyrink picked up this theme literary, like Goethe and others before him and Eggeler made the illustrations. 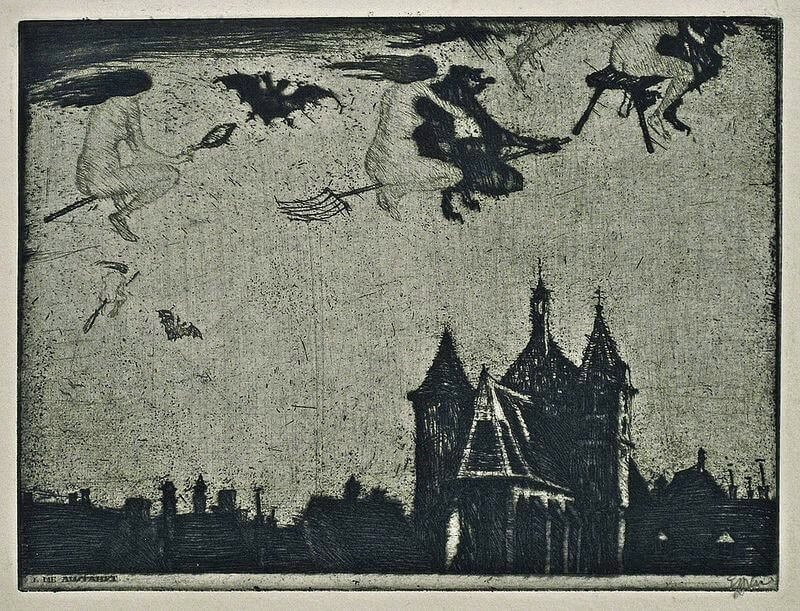 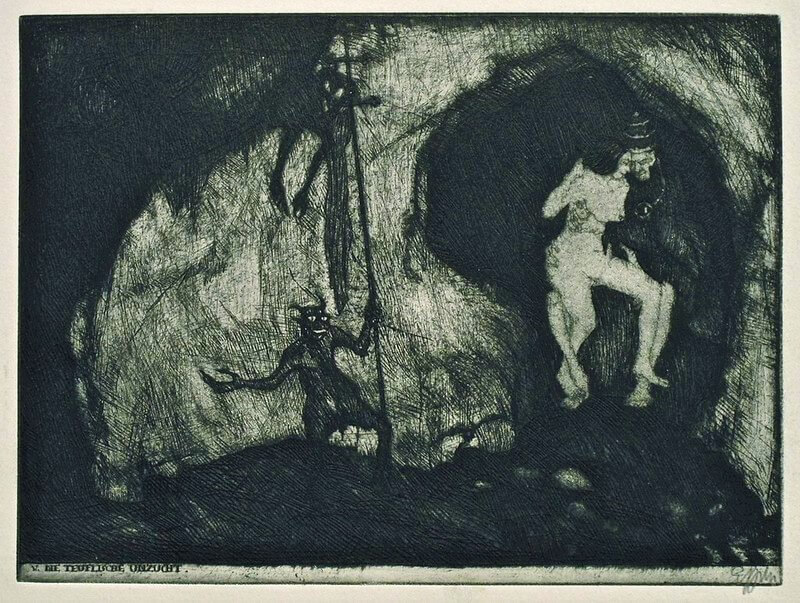 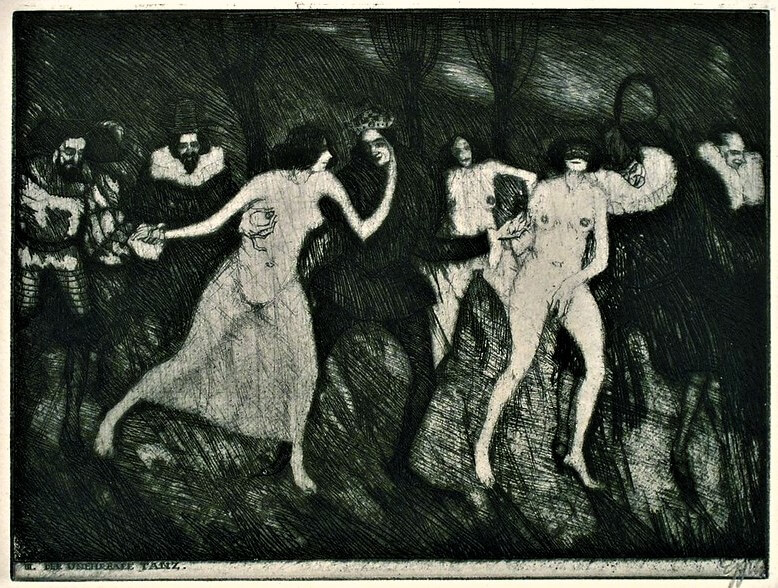 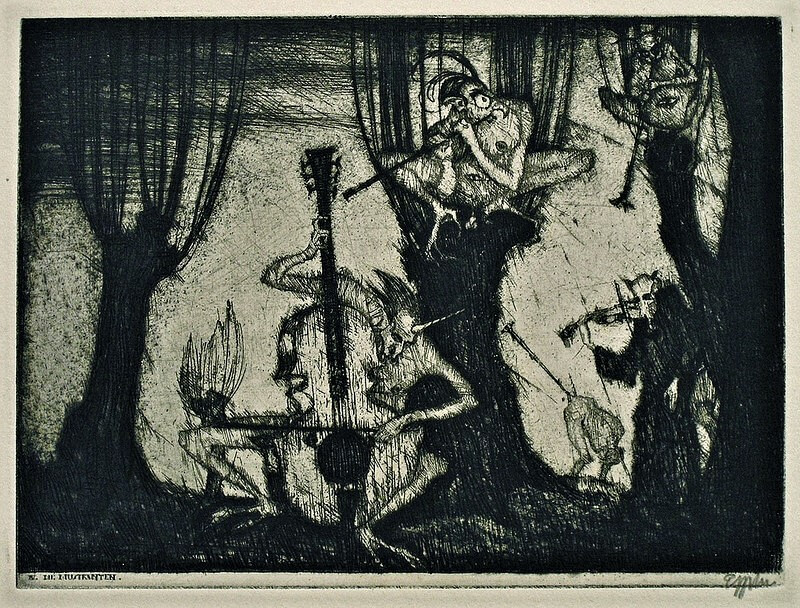 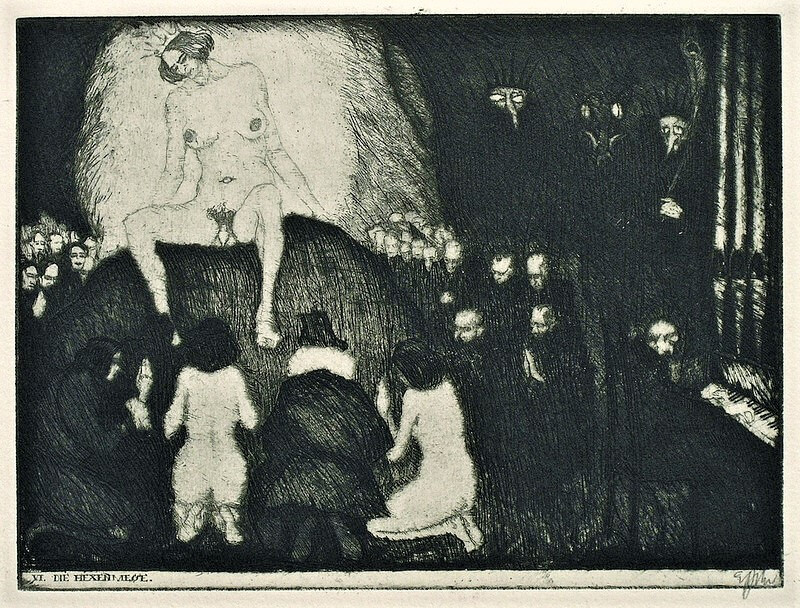 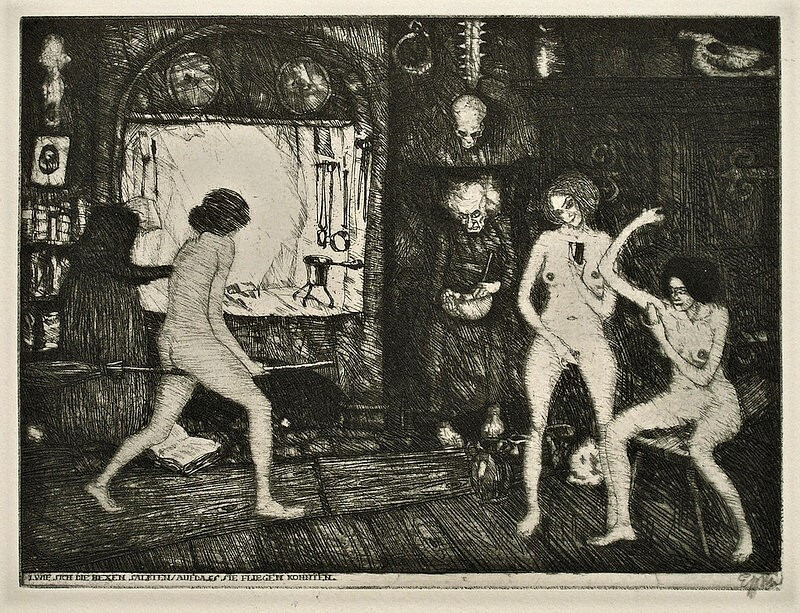 Reigen is a controversial play with provocative sexual themes written by Arthur Schnitzler in 1897.
The play scrutinizes the sexual morals and class ideology of its day through a series of encounters between pairs of characters (shown before or after a sexual encounter). By choosing characters across all levels of society, the play offers social commentary on how sexual contact transgresses boundaries of class.

Printed privately in 1900, the play was not publicly performed until 1920, when it provoked strong reactions. The play’s two titles —in German Reigen and in French La Ronde— refer to a round dance, as portrayed in the English nursery rhyme Ring a Ring o’ Roses.

The play is set in the 1890s in Vienna. Its dramatic structure consists of ten interlocking scenes between pairs of lovers. Each of its ten characters appears in two consecutive scenes (with one from the final scene, The Whore, having appeared in the first).

La Ronde was first printed in 1900 for private circulation amongst friends. In 1903, the first German-language edition was published in Vienna, selling some 40,000 copies, but was banned by the censors a year later. A German editor was found in 1908 to publish the play from Germany. In 1912, it was translated into French and in 1920 into English, and published as Hands Around. In 1917 an English translation written by Marya Mannes was published by Boni & Liveright, inc.. A Dutch translation, by Jo van Ammers-Küller, was published in 1923 as Rondedans: tien dialogen.

Schnitzler’s play was not publicly performed until 1920, on 23 December 1920 in Berlin and 1 February 1921 in Vienna. (An unauthorized production was staged earlier, in Budapest in 1912.) The play elicited violent critical and popular reactions.

Schnitzler suffered moralistic and personal attacks that became virulently anti-Semitic. Schnitzler was attacked as a Jewish pornographer and the outcry came to be known as the “Reigen scandal.” Despite a 1921 Berlin court verdict that dismissed charges of immorality against the play, Schnitzler withdrew La Ronde himself from public production in German-speaking countries.

The play remained popular in Russia, Czechoslovakia, and especially in France, where it was adapted for the cinema twice, in 1950 and again in 1964. In 1982, forty years after Arthur Schnitzler’s death, his son Heinrich Schnitzler released the play for German-language performances.
In 1922, the founder of psychoanalysis Sigmund Freud wrote to Schnitzler that “you have learned through intuition—though actually as a result of sensitive introspection—everything that I have had to unearth by laborious work on other persons.”

The illustrations below are based on scenes taken from Reigen 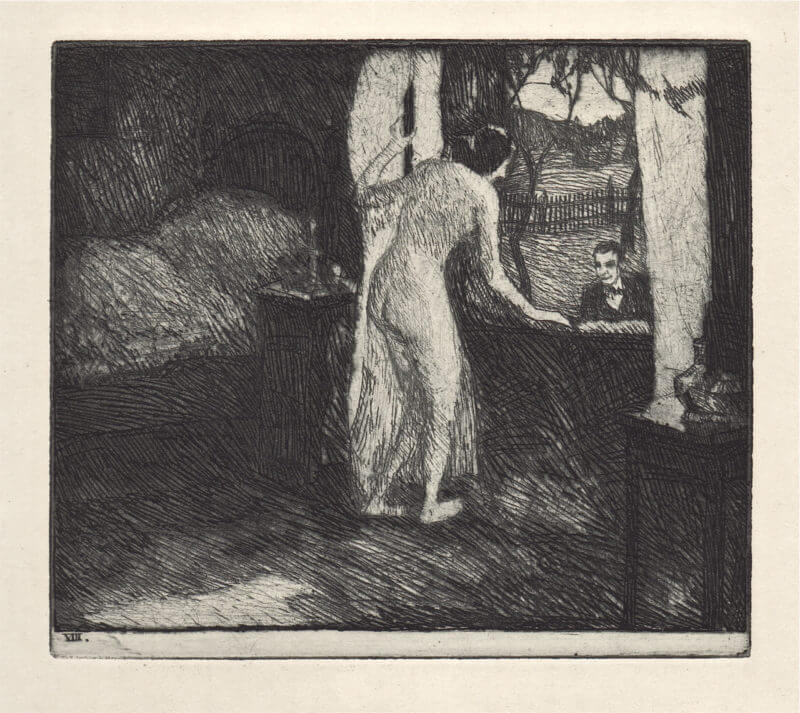 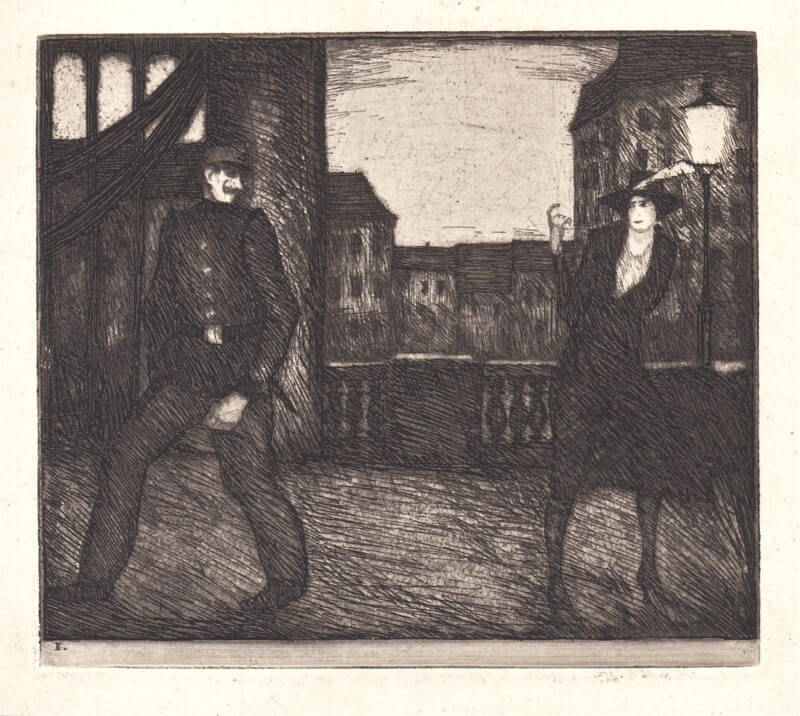 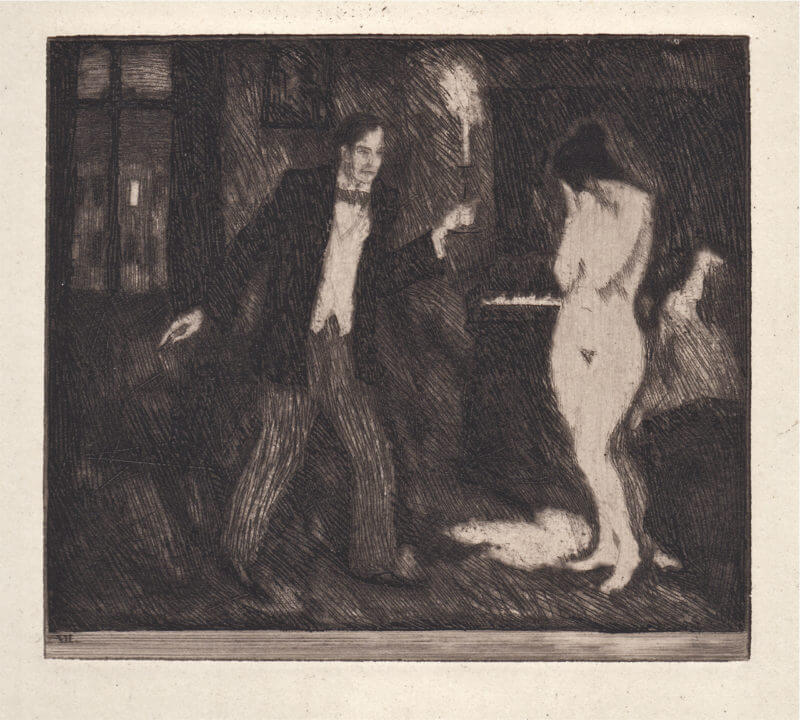 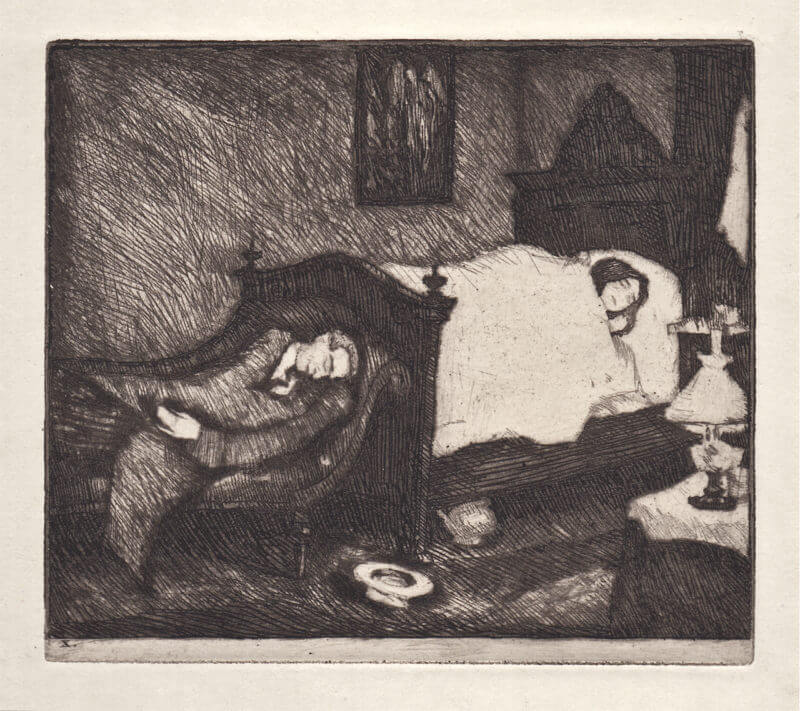 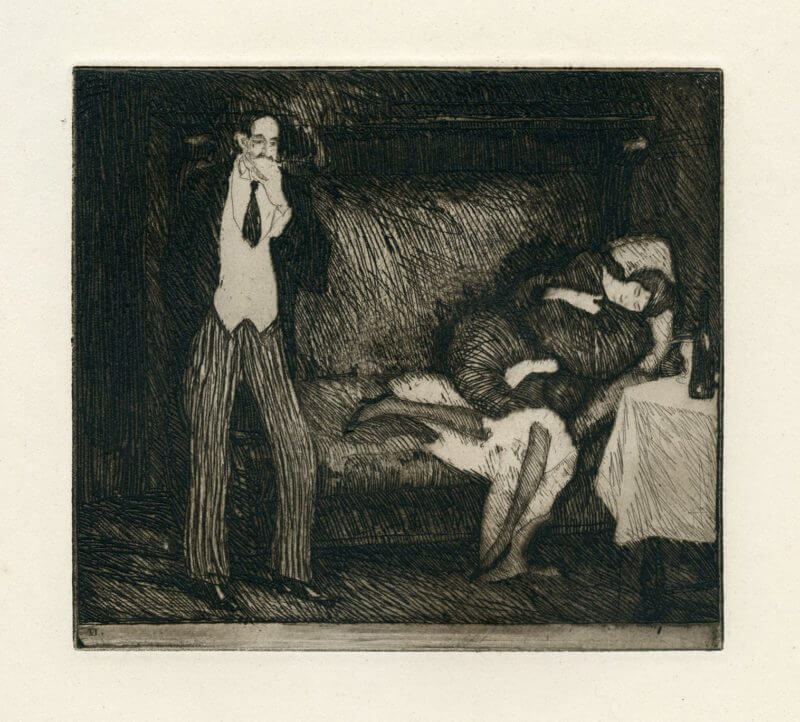 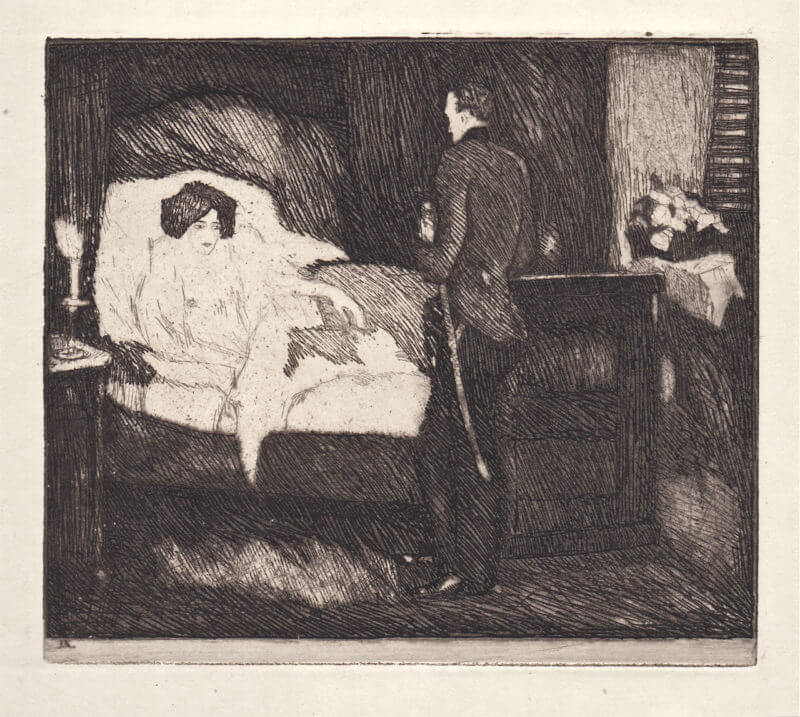 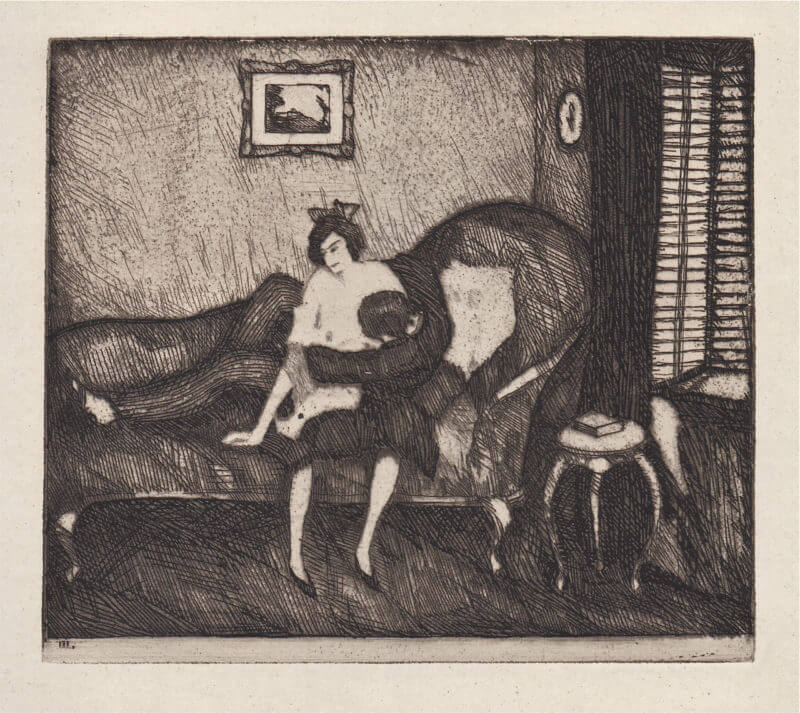 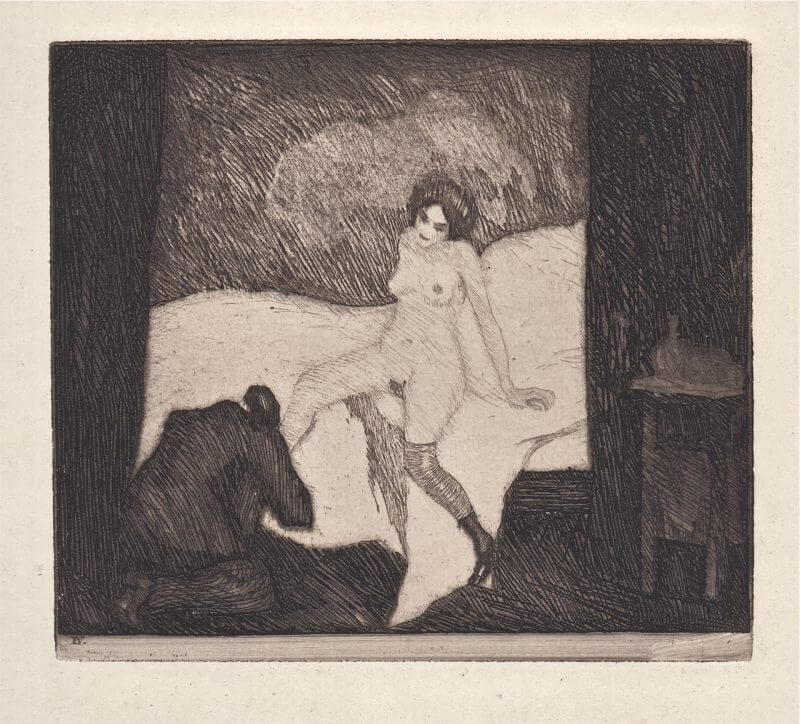 Die Herzen der Könige (The Hearts of Kings) by Hanns Heinz Ewers is a story about a painter that uses the hearts of the kings of France in his paintings. Hanns Heinz Ewers (3 November 1871 – 12 June 1943) was a German actor, poet, philosopher, and writer of short stories and novels. While he wrote on a wide range of subjects, he is now known mainly for his works of horror, particularly his trilogy of novels about the adventures of Frank Braun, a character modeled on himself. The best known of these is Alraune (1911).

Ewers also published several plays, poems, fairy tales, opera librettos, and critical essays. These included Die Ameisen, translated into English as The Ant People, Indien und ich, a travelogue of his time in India, and a 1916 critical essay on Edgar Allan Poe, to whom he has often been compared. Indeed, Ewers is still considered by some as a major author in the evolution of the horror literary genre, cited as an influence by American horror writers such as H. P. Lovecraft and Guy Endore. Students of the occult are also attracted to his works, due to his longtime friendship and correspondence with Aleister Crowley. Ewers also translated several French writers into German, including Villiers de l’Isle-Adam.