Why did Witches Want to Ride their Broomsticks?

Broomsticks and witches are inseparably linked since the thirteenth century AD. The general image of witch is that of a woman with a pointed hat flying through the air on a magic broomstick. As with all mythologies there is an element of truth behind the image. Witches did ride broomsticks, after a fashion, the broomsticks were magic, in a way, and the pointed hat was the mildest of the punishments inflicted on them for their activities! 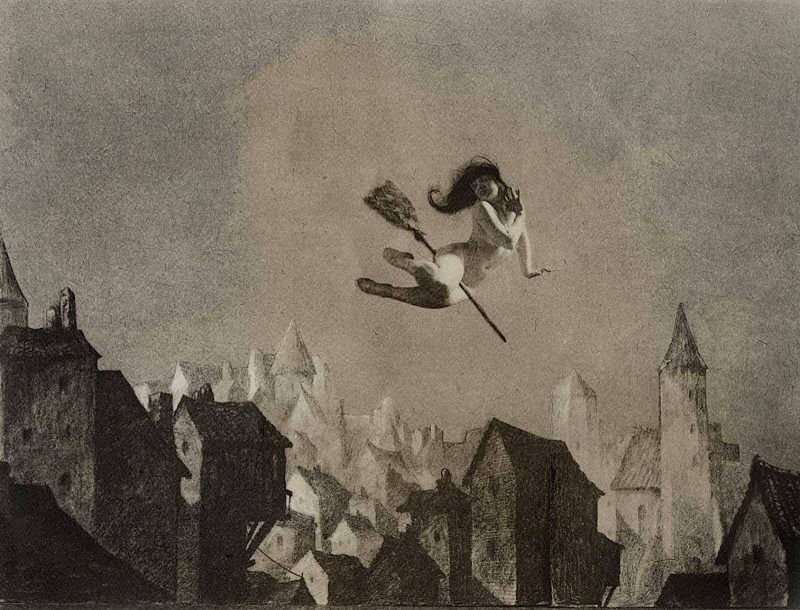 William Mortense, Off for the Sabbath, 1927

During the time leading up to the witchcraft trials in Europe, the staple bread was made with rye. In a small town where the bread was fresh baked this was just fine, but as Europe began to urbanize and the bread took more time to get from bakery to grocer, the rye bread began to host a mold called “ergot”. Ergot of rye is produced by a lower fungus (Claviceps purpurea) that grows parasitically on rye and, to a lesser extent, on other species of grain and on wild grasses. Kernels infested with this fungus develop into light-brown to violet-brown curved pegs (sclerotia) that push forth from the husk in place of normal grains.

Ergot of rye (Secale cornutum) is the variety used medicinally. LSD, one of the most powerful hallucinogenic drugs known, was invented in 1938 by the Swiss chemist Albert Hoffman, who was interested in developing medicines from compounds in ergot. Although LSD is purely synthetic, clues to its biological activity can be found by tracing the history of the fungus from which it is derived. The first mention of a medicinal use of ergot, as a drug to precipitate childbirth, is found in the notes of the Frankfurt city physician Adam Lonitzer in 1582.

The Witches of New York

Ergot, in high doses is very dangerous. It can cause gangrene, the loss of limbs and even be lethal. Until quite recently, outbreaks of ergot poisoning approaching epidemic proportions were recorded in most European countries including certain areas of Russia. Even so, in the seventeenth century it was discovered that ergot-containing bread was the cause of the poisonings. This fact led to the rise in popularity of wheat bread, which is resistant to ergot mold.

In smaller doses however, ergot is a powerful hallucinogenic drug. And because the enjoyment of such things is not confined to this age alone, it became quite popular among those who were inclined towards herbalism and folk cures. Ergot is mentioned in Shakespeare’s plays, and turns up in virtually every contemporary writing of the witchcraft age. In particular, it could be used as the inevitable central ingredient in the flying ointment that witches rubbed their broomsticks with.

The Werewolf Book: The Encyclopedia of Shape-Shifting Beings

When ergot is eaten, there was the risk of death, but when absorbed through the thin tissues of the female genitals, the hallucinogenic effects were more pronounced with less ill effects. The modern image of witches riding their broomsticks was inspired by the sight of a woman rubbing herself on the drug coated smooth stick of her broom, writhing in the throes of hallucinations, and no doubt, some intense orgasms as well. To her unsophisticated neighbors, such a sight would have been terrifying. The lack of an equivalent mechanism for men is one reason why “witchcraft” was seen as a predominantly female phenomenon. The addition of clothing to the witch is a modern embellishment to protect ‘Family Values’. 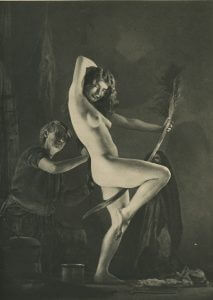 Witch on broomstick by William Mortense

So the flying witch was in reality the tripping witch. The first stories of “flying ointments” were recorded in the early 1400’s. In those cases, mention was made only that the witches dreamt they were flying. Watched all night long, the witches were not seen to actually leave, but would awake with lurid stories of far away gatherings.

While the forged “grimoires” produced by the clergy prosecutors, wove lurid tales of the boiled fat of a child as the central ingredient of the flying potion, the reality is that the concoction was based on easily available herbs such as aconite, nightshade, belladonna, alcohol, and of course, ergot. The clergy, eager to so horrify the masses as to remove all resistance to the abuses of the Inquisition, cast all witches as a threat to the children. Their myth of witches using a child’s fat for a flying potion has no basis in historical fact whatsoever, but persists to this very day. ♦

Sorceress (the English translation of La Sorcière) by Jules Michelet is still one of the most vivid, dark and confronting studies on witchcraft ever produced. Long before Murray, it positions the medieval witch within a diminishing ancient culture of nature worship and the ruthless efforts of Christianity – with its radical hostility towards nature and life – to overwrite it. Michelet’s was an authority on the history of the Middle Ages, and his insistence that history should concentrate on ‘the people, and not only its leaders or its institutions’ placed him ahead of his time as a godfather of micro-history.

Starting in the 13th century the book moves on towards belladonna, the Sabbath and pacts with Satan, into the hells of the Burning Times – social contexts, church intrigues and mass hysteria always included. Via Basque witches, the Black Masses and demoniacal possessions we enter the satanic decadence of 17th century France, and finally the end of the witch burning era in 18th century, with the trial of Charlotte Cadière.

Though a solid work of history, the reader is not served a simple bone dry exposition of facts and theories, but something that tastes like a Bloody Mary. 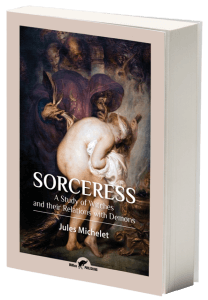