Though, in contrast to states like Spain, Germany, England, Scotland and even the USA, Holland does not experience a very interesting history of witchcraft. We had our witches and even in our beloved Amsterdam, one of the most liberal of all cities in the world for centuries, witches were persecuted and burned at the stake! Ironically an interesting number of witchcraft paintings survived the centuries.

At the time, we did have some of the most talented painters in the world, who were as fascinated as Goya with the subject and left us quite a few, now world famous masterpieces. The selection below shows paintings depicting witches anointing themselves, the sabbat or in other typical dark or demonic atmospheres  painted mostly during the 17th Century or Gouden Eeuw (Dutch Golden Age). 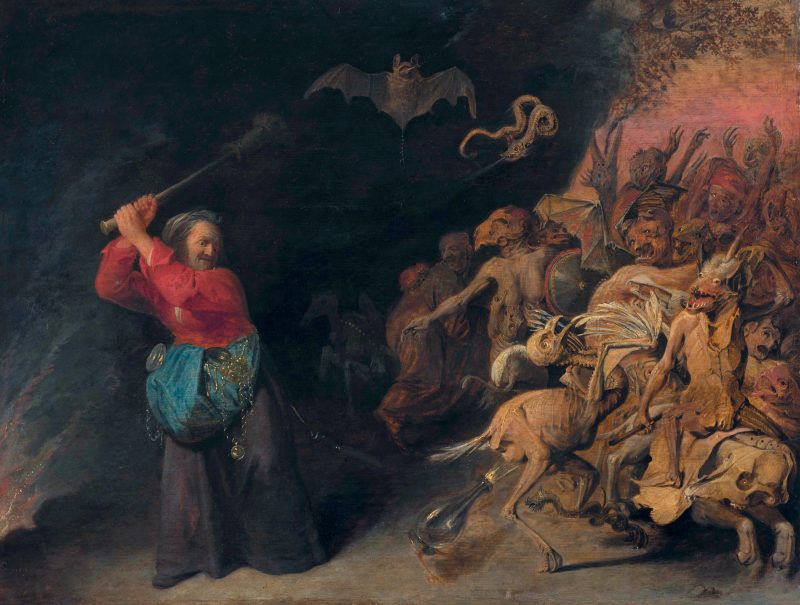 David Rijckaert III, David Rijckaert the Younger or David Ryckaert III (2 December 1612 (baptized), Antwerp – 11 November 1661, Antwerp) was a Flemish painter known for his contribution to genre painting, in particular through his scenes of merry companies and peasants. He enjoyed the patronage of prominent patrons and was a painter to the court of the governor of the Southern Netherlands.

Ryckaert began his career as a landscape painter. He changed his specialization early on to genre paintings. These show the influence of the leading Flemish genre painters Adriaen Brouwer, David Teniers the Elder, and in particular David Teniers the Younger. His work often depicts interiors with professionals, such as alchemists, quacks, cobblers or painters or inns with peasants. He also painted children at play, celebrations with music and imaginary scenes of witches and ghosts. Many of his works are signed and dated making it easy to follow his artistic development from 1637 to 1661. 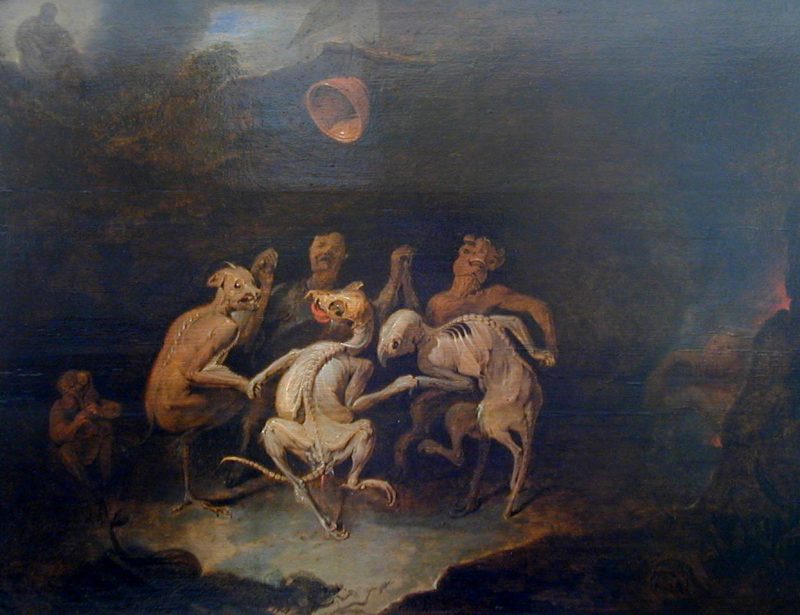 witchcraft paintings 2 : The Dance of the Farfadets (elfs in French folklore) by David Ryckaert III (1612-1661)

Frans Francken the Younger was a Flemish painter and the best-known member of the large Francken family of artists. Francken created altarpieces and painted furniture panels, but his reputation chiefly relies on his small and delicate cabinet pictures with historical, mythological, or allegorical themes. He played an important role in the development of Flemish art in the first half of the 17th century through his innovations in many genres including genre painting and his introduction of new subject matter. He was a frequent collaborator of leading Antwerp painters of his time.

Frans Francken the Younger likely first worked in the family workshop before he became an independent master in the Antwerp Guild of Saint Luke in 1605. He was deacon of the Guild in 1616. Francken’s talent was recognised from an early age. He became a very successful artist and operated a large workshop which made many copies of his original compositions. Already in 1607 he was able to buy a house in the city centre where he established his residence and workshop.

Frans Francken the Younger introduced many other unusual themes that later became popular, such as the ‘Triumphal Procession of Amphitrite’ and ‘Croesus and Solon’. Francken also made a series of paintings depicting witches and witchcraft, including portrayals of witches’ sabbats.

witchcraft paintings 4 : The Witches’sabbat (Heksenbijeenkomst) by Frans Francken the Younger

David Teniers the Younger or David Teniers II (15 December 1610 – 25 April 1690) was a Flemish painter, printmaker, draughtsman, miniaturist painter, staffage painter, copyist and art curator. He was an extremely versatile artist known for his prolific output. He was an innovator in a wide range of genres such as history, genre, landscape, portrait and still life. He is now best remembered as the leading Flemish genre painter of his day. Teniers is particularly known for developing the peasant genre, the tavern scene, pictures of collections and scenes with alchemists and physicians.

He was court painter and the curator of the collection of Archduke Leopold Wilhelm, the art loving Governor General of the Habsburg Netherlands. He created a printed catalogue of the collections of the Archduke. He was the founder of the Antwerp Academy, where young artists were trained to draw and sculpt in the hope of reviving Flemish art after its decline following the death of the leading Flemish artists Rubens and Anthony van Dyck in the early 1640s. He was influential on the next generation of Northern genre painters as well as on French Rococo painters such as Antoine Watteau.

His work was easily accessible to other artists as he was one of the most reproduced artists of his time and prints after his work were produced in large quantities. In Flanders he influenced his pupil Gillis van Tilborgh and David Rijckaert III. Thomas Wijck, Frans van Mieris the Elder, Jacob Toorenvliet and Cornelis Bega in the Dutch Republic were influenced by his scenes of alchemists. 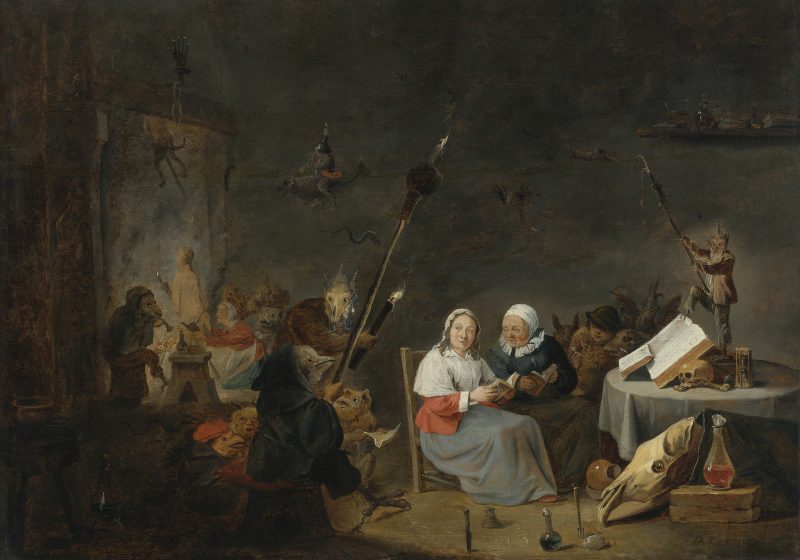 witchcraft paintings 5 : Scene with witches by David Teniers the Younger 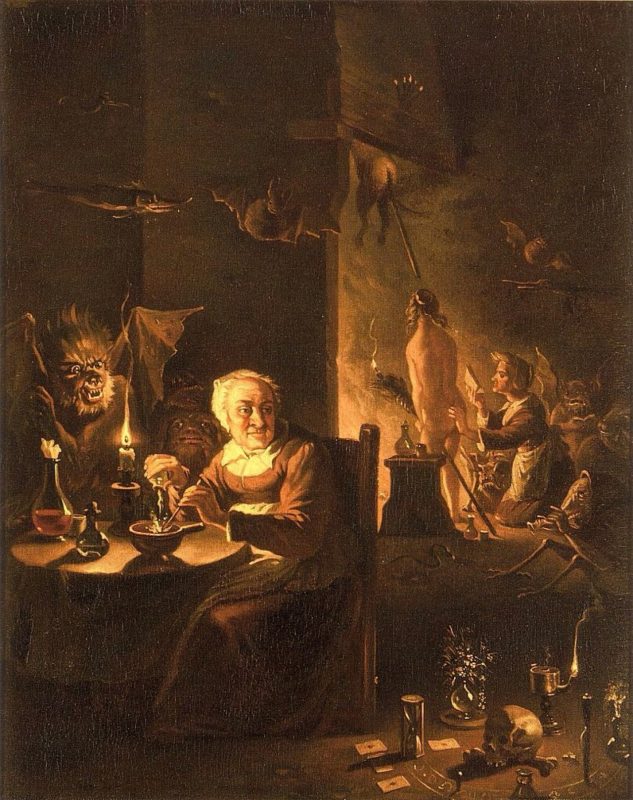 witchcraft paintings 6 : Witches taking of for the sabbath by David Tenier the Younger