Datura stramonium is a magical plant known by many names. In Portugese its called trombeta, trombeteira, estramónio, estramônio, Figueira do demo, figueira do diabo, figueira do inferno, figueira brava and zabumba, estramónio in Spanish and jimson weed or devil’s snare in English and Jamestown weed in the USA. In Haiti the plant was used as a central ingredient in the recipe of the concoction bokors use to create zombies. In his book, The Serpent and the Rainbow, Wade Davis identified Datura stramonium, as the “zombi cucumber”. 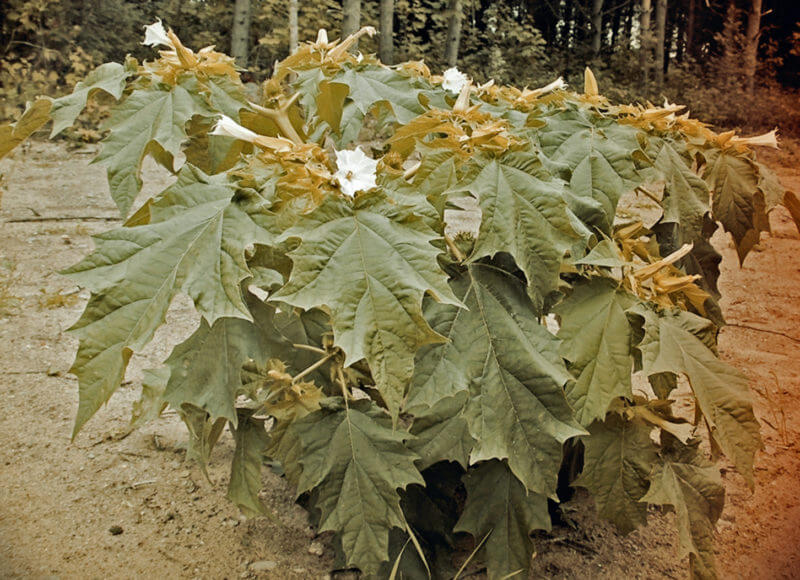 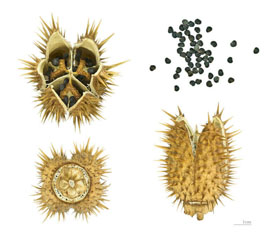 Datura stramonium is a strong-smelling, erect, annual, freely branching herb that forms a bush up to 60 to 150 cm tall, belonging to the Solanaceae or nightshade family. The flowers look a bit like white trumpets. The fruit has an oval shape and is covered with very sharp thorns; it is divided into four seed chambers. Every part of the plant emits a foul odour when crushed or squeezed.

Its likely origin was in Central America, and it has been introduced in many world regions. Datura stramonium has been used in various treatments of traditional medicine or drug abuse as well as a hallucinogen and deliriant that is taken for intense spiritual visions. All parts of Datura plants contain dangerous levels of the tropane alkaloids atropine, hyoscyamine, and scopolamine, which are classified as deliriants, or anticholinergics.

The risk of fatal overdose is high among uninformed users, and many hospitalizations occur among recreational users who ingest the plant for its psychoactive effects. The amount of toxins varies widely from plant to plant and its toxicity depends on its age, where it is growing, and the local weather conditions. Datura intoxication typically produces delirium, hallucination, hyperthermia, tachycardia, bizarre behaviour, urinary retention, and severe mydriasis with resultant painful photo-phobia that can last several days. Pronounced amnesia is another commonly reported effect.

The onset of symptoms generally occurs around 30 to 60 minutes after ingesting the herb. These symptoms generally last from 24 to 48 hours, but have been reported in some cases to last as long as 2 weeks. As with other cases of anticholinergic poisoning, intravenous physostigmine can be administered in severe cases as an antidote.

The genus name is derived from the plant’s Hindi name, dhatūra, ultimately from Sanskrit dhattūra ‘white thorn-apple’. Stramonium is originally from Greek στρύχνος “nightshade” and μανιακός “mad“. In the United States, the plant is called “jimsonweed”, jimson weed, or more rarely “Jamestown weed” deriving from the town of Jamestown, Virginia, where English soldiers consumed it while attempting to suppress Bacon’s Rebellion. They spent 11 days in altered mental states of which we find an interesting description in The History and Present State of Virginia, Book II: Of the Natural Product and Conveniencies in Its Unimprov’d State, Before the English Went Thither, 1705 by — Robert Beverley, Jr.:
The James-Town Weed (which resembles the Thorny Apple of Peru, and I take to be the plant so call’d) is supposed to be one of the greatest coolers in the world. This being an early plant, was gather’d very young for a boil’d salad, by some of the soldiers sent thither to quell the rebellion of Bacon (1676); and some of them ate plentifully of it, the effect of which was a very pleasant comedy, for they turned natural fools upon it for several days: one would blow up a feather in the air; another would dart straws at it with much fury; and another, stark naked, was sitting up in a corner like a monkey, grinning and making mows at them; a fourth would fondly kiss and paw his companions, and sneer in their faces with a countenance more antic than any in a Dutch droll. In this frantic condition they were confined, lest they should, in their folly, destroy themselves—though it was observed that all their actions were full of innocence and good nature. Indeed, they were not very cleanly; for they would have swallowed in their own excrements if they had not been prevented. A thousand such simple tricks they played, and after eleven days returned themselves again, not remembering anything that had passed.

The active agent in datura is atropine which has been used in traditional medicine and recreational abuse over centuries. The leaves are generally smoked either in a cigarette or a pipe. During the late 18th century, James Anderson, the English Physician General of the East India Company, learned of the practice and popularized it in Europe. The Zuni people and the Chinese used it as a form of anesthesia during medical treatments of a surgical nature.

In early European medicine John Gerard’s Herball (1597) wrote: “The juice of Thornapple (Datura stramonium), boiled with hog’s grease, cureth all inflammations whatsoever, all manner of burnings and scaldings, as well of fire, water, boiling lead, gunpowder, as that which comes by lightning and that in very short time, as myself have found in daily practice, to my great credit and profit.”

In the late 18th century William Lewis reported that the juice could be made into “a very powerful remedy in various convulsive and spasmodic disorders, epilepsy and mania,”. He also wrote the plant gave ease in external inflammations and haemorrhoids. In the 19th-century Datura stramonium is discussed as a treatment for asthma work by Henry Hyde Salter.

Apart from the bokors in Haitian voodoo, in many other parts of the world the Datura stramonium or other Datura varieties were used for magical or spiritual purposes. Among the ancient Chumash Indians living on the coast of California, according to reports by the Portuguese explorer João Rodrigues Cabrilho, datura or “Jimson’s Herb” was used to help produce visions. They used to ingest the small black seeds of datura to “commune with deities through visions”.

Across the Americas, other indigenous peoples, such as the Algonquian, Navajo, Cherokee, Luiseño and the indigenous peoples of Marie-Galante also used this plant in sacred ceremonies for its hallucinogenic properties. In European witchcraft, Datura stramonium (Thornapple, Gemeine Stechapfel, Weiße Stechapfel, Doornappel etc.) was a common ingredient used for making witches’ flying ointment along with other poisonous plants of the nightshade family. It was often responsible for the hallucinogenic effects of magical salves and potions.

In Ethiopia, some students and Debtrawoch (lay priests), use Datura stramonium to “open the mind” to be more receptive to learning, and creative and imaginative thinking. The common name “datura” has its origins in India, where the sister species Datura metel is considered particularly sacred — believed to be a favorite of Shiva in Shaivism.

Both Datura stramonium and Datur metel have reportedly been used by some sadhus and the Aghori as both an entheogen and ordeal poison. It was sometimes mixed with cannabis as well as highly poisonous plants like Aconitum ferox to intentionally create dysphoric experiences. They used unpleasant or toxic plants such as these in order to achieve spiritual liberation (moksha) in settings of extreme horror and discomfort.

The shaman Don Juan, in the book “The Devil’s Herb” by Carlos Castañeda (1931-1998) says about the Datura (Devil’s Herb): “The devil’s herb has four heads; the root, the stem and the leaves, the flowers and the seeds. Each one is different, and whoever makes it his ally has to learn about them in that order. The most important head is in the roots. The power of the devil’s herb is conquered through its roots. The stem and the leaves are the head that heals the diseases; used correctly, this head is a gift to humanity. The third head remains in the flowers, and is used to make people crazy or to make them obedient, or to kill them. The man who has the herb as an ally never absorbs the flowers, not even the stem and the leaves, except in case he himself is sick; but the roots and the seeds are always absorbed; especially the seeds, which are the fourth head of the devil’s herb and the most powerful of the four.”