The Haselwurm and the Tatzelwurm or Stollenwurm are a strange creatures which dwell in a foggy way between spirit beings from folklore and cryptozoological rarities. The weirdest thing about the creature is the fact that there exists a Haselwurm magic. A German Haselwurm-conjuration-text by means of which certain magical qualities were obtained. Part of this ritual-text is given in translation below. Though on the one hand separate creatures the Haselwurm and Tatzelwurm fuse in old depictions of them as a snake withsmall wings on its back. 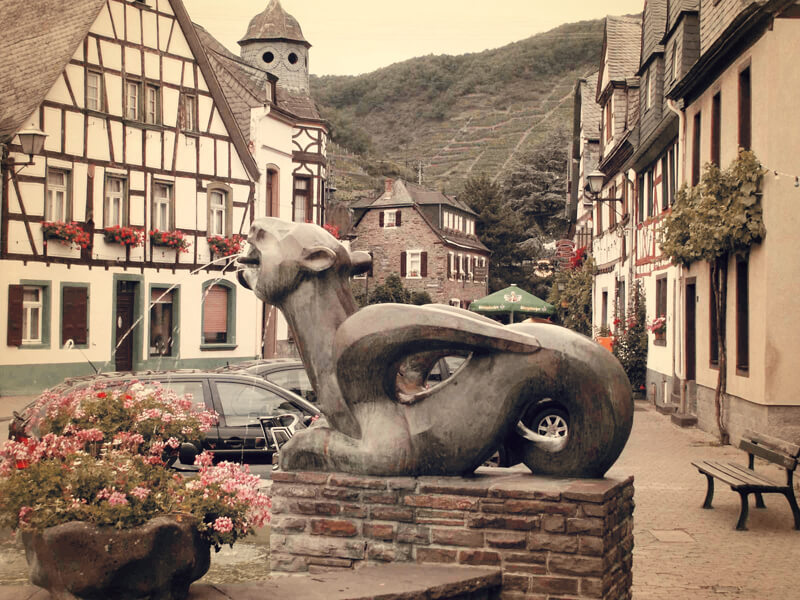 Semi-mythical worms play the main role in the Tyrolean legends, and of these the Haselwurm, which is also sometimes called Weißer Wurm (“White Wurm [Snake]”), Wurbl or Wurmb, Murbl, Paradeiswurm, Paradeisschlange (“Snake of Paradise”) or Wurm der Erkenntnis (“Wurm [Snake] of Knowledge”). It is clear that like the Swedish Vitorm, the Haselwurm was believed to have – or store in its body – great magical powers. Johann Nepomuk Ritter von Alpenburg provides curious data about the creature and a magical ritual to obtain it in his Deutsche Alpensagen, Vienna 1861.

He writes that in “Auf der Schön”, a farm above the Higna (Higenau) on the Reiterberge, a very carefully preserved house record from 1661 is preserved, which is said to have been written by Wolfgang Hechenblaikner. In addition to various remedies and spells that were in use at that time, the record, according to the author, has so much information about the Haselwurm that it can be considered as the most complete source. Johann Nepomuk Ritter von Alpenburg uses Weisse Natter as a synonym for Haselwurm. 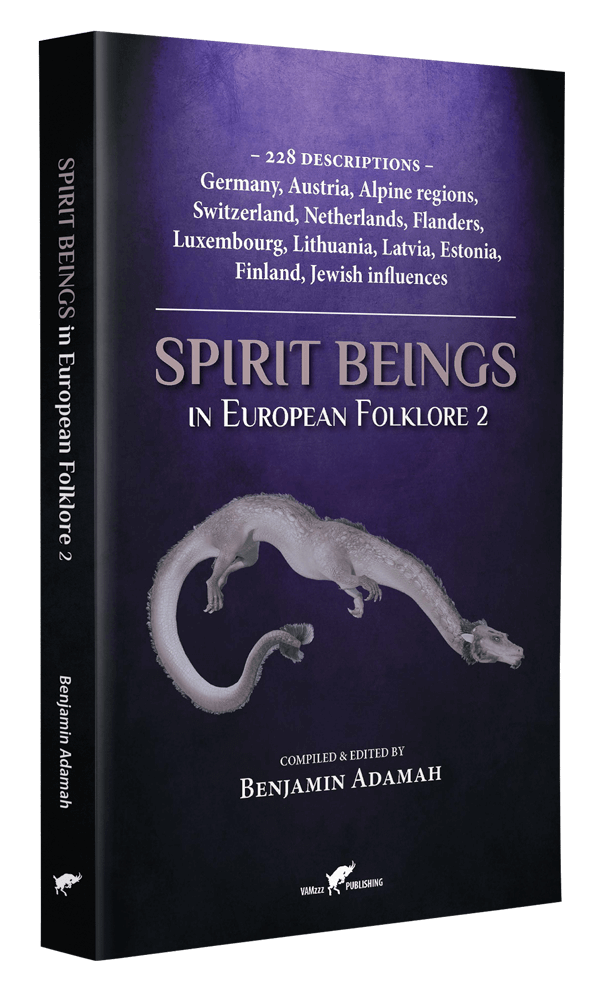 According to Heinrich Eckstorm in Chronicon Walkenredense (1617):
“In July 1597, a woman from Holbach in the Harz Mountains is said to have collected blueberries and encountered a gigantic hazel worm. She fled to the nearby village of Zorge, where she found shelter with a woodcutter. Eight days later, the woodcutter himself encountered the worm, which lay across the road and was so large that he first mistook it for a fallen tree. The creature was greenish-yellow and had feet on its snakelike body.” 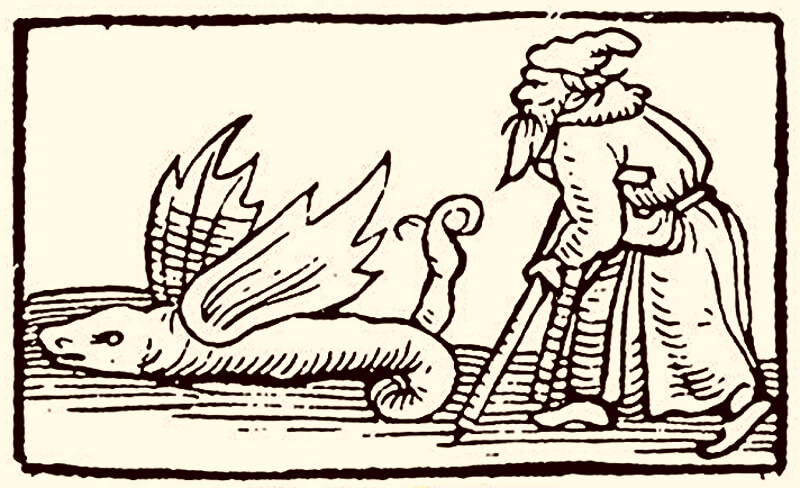 Old medieval woodcut of the Hazelwurm or Tatzelwurm

Below I quote Johann Nepomuk Ritter von Alpenburg on the Haselwurm in a fragment from:

“..// Where you find hazel bushes that have mistletoe, dig them up completely along with the trees, and before you dig them up and want the worm, which must be done on a Friday in the full moon before the sun rises, say the incantation:

I adjure thee, pure worm, by God the Father, by God the Son, and by God the Holy Ghost, Amen; that thou depart not from this place, till I carry thee hence.

Then make three † over it. Then you make three circles around the perennials and start digging without saying a word. As soon as you see the hazel worm, take powdered “Artoimoissia” (“wormwood” or “Artemisia absinthium”) and throw a lot into it, if it wanted to escape, but then you will find a beautiful white adder, it is not poisonous nor evil and does not squirm like another adder, just attack it comfortingly without any fear. As soon as you have it in your hand, say the following 13 words aloud:

As soon as you have spoken this, the worm will patiently submit to everything, and he will immediately be submissive to you. Now peel off its skin and take out its tongue, but put the tongue into the peeled off skin and tie everything in a white cloth. This serves to make it invisible. If you hold it in your right hand, no one will see you, whether on horseback or on foot. If you then breathe on a door or a lock, it opens by itself and closes again; if you take the skin with the tongue from the right hand into the left hand, you are also visible again.

After the skin is peeled off, the tongue torn out, then cut the viper into pieces, boil it in a new pan and eat from it as much as you can: immediately you will recognize the nature of all herbs and certain richness and memory. All the world is yours, no one can be your enemy, all rights you win, all wealth falls asleep to you: you may not be caught, all evil spirits must flee or be subservient to you. The eating of the adder does not harm thee.

No art is easier to accomplish; and what a man reads, whether Christian or secular, he knows all by heart, and never forgets, likewise what he has never heard, and what he begins ends happily: it is about the black art.” 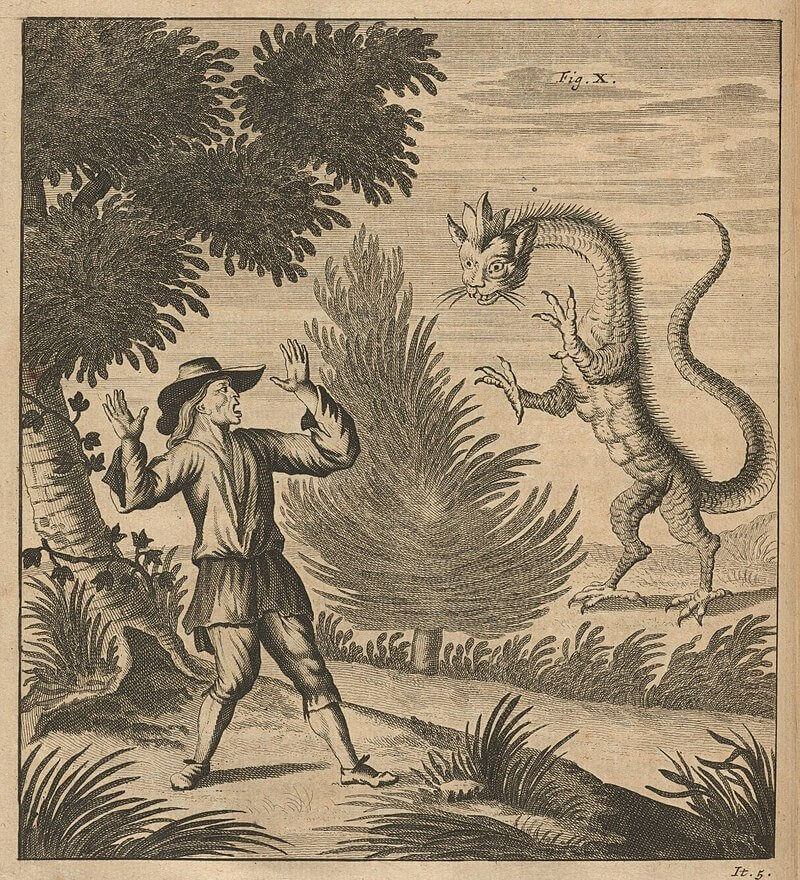 In the folklore of the Alpine region of south-central Europe, the Tatzelwurm or Stollenwurm, Stollwurm is a legendary lizard, with a serpent-like body of around 1 to 7 feet in length which may be slender or stubby, and with two, four or six legs. It has has a cat-like face, especially in Switzerland. The Tatzelwurm of Austria and Bavaria was believed to have a poisonous breath, which could be lethal.

The Stollenwurm has also been characterized as poisonous in Swiss lore. The creature is said to make a shrieking sound or utter whistles and hisses.The creature is known in the Austrian, Bavarian, French, Italian and Swiss Alps under many regional names, including Bergstutz, Springwurm, Praatzelwurm, and in French, Arassas. The name Tatzelwurm is not traditionally used in Switzerland, and the creature is usually known by the Swiss as Stollenwurm or Stollwurm (“tunnel worm” or “dragon of the mine-tunnels”) in the Bernese Alps.

Stollenwurm may also be interpreted to mean a “serpent” with “short, thick feet”. Tatzelwurm was the term localized in Bavaria, Germany next to Daazlwurm and Praazlwurm. Apart from Tatzelwurm, Bergstutz, Birgstutz or Birgstuz’n (“mountain-stump”) was the local name used in places in Austria such as the state of Styria, parts of the Tyrol, Salzburg and the Salzkammergut region, and some parts of Bavaria (specifically Berchtesgaden). In the valleys of the Traun and Alm rivers of Austria the name was simply Stutzn. 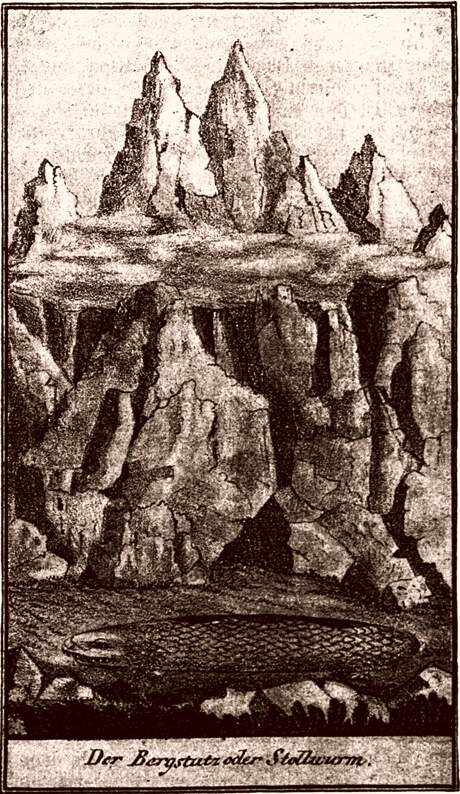 An anecdotal “cat-headed serpent” with a black-grey body and no legs was said to have been encountered by Johann and Thomas Tinner at a place locally known as “Hauwelen” on the Frümsen mountain in the Barony of Altsax, Switzerland. It was alleged to measure 7 feet or more in length. Residents in the neighborhood were complaining that their cows’ udders were being mysteriously sucked on but the incidents stopped after this creature was killed. A four-legged lizard with a crest on its head was allegedly seen by Johannes Bueler of Sennwald Parish.

A dragon with an enormous head and two forelimbs, was claimed to have been encountered by 70-year-old Johannes Egerter of Lienz on Mt. Kamor; when it exhaled its breath, the man said, he was overcome with headache and dizziness. A four-legged, cat-faced “mountain dragon” was described by one Andreas Roduner in 1660 on Mt. Wangersberg in Sarganserland (Landvogtei of Sargans), and when it reared up on its hind legs it became tall as a man, with boar-like bristles running down its back.

A 1779 legend describes an encounter with the Tatzelwurm by farmer Hans Fuchs. According to the story, while in the mountains, he allegedly saw two of these creatures in front of him. Frightened for his life, he fled to his home and died of a heart attack from the experience. Supposedly before he died, he told his family of the encounter, describing the creature as 5 to 7 feet in length with a serpent-like body, two clawed front legs and a large feline-like head.

In 1811, a Stollenwurm with a forked tongue, serpent-like but rather wide head, and two stubby feet was reported by a Schoolmaster Heinrich, which he claimed to have seen in Guttannen-tal, Canton Bern, Switzerland. He described it as measuring “1 klafter” in length, with a body about the thickness of a man’s leg. [The klafter is an historical unit of length, used in Central Europe.a unit of length, derived from the span of a man’s outstretched arms – traditionally about 1.80 metres]

This encounter hapened a few years before, Hans Kehrli from Allmentli in Trachselwald claimed to have killed a quite small, hairy Stollenwurm carrying 10 young. The writer Johann Rudolf Wyss, explicitly stated that while the dragon was fabulous, the Stollenwurm was dubious. To the standard description of the Stollenwurm as a sort of snake with a cat’s head and short feet, he added it was sometimes said to be hairy, and not just 2 or 4 but multiple limbs like a caterpillar.

It is unclear whether the Tatzelwurm should be catalogued under “folklore” or “cryptozoology” as even in modern times, the Tatzelwurm has been sighted again and again. To date, there are about 80 eyewitness accounts. In 1950, various people saw it in the Jura, in 1948 and 1968 in the French Alps, in the early 1980s in South Tyrol, and in 1984 near Aosta. In 1935, a Tatzelwurm was reportedly photographed in the Aareschlucht gorge in the eastern Bernese Oberland, according to a multi-page report in the Berliner Illustrirte Zeitung.

A reward for a captured specimen was also offered by the newspaper. Even today, the Tatzelwurm is the mascot of the Aare Gorge. In the summer of 1963, a Tatzelwurm was seen several times near Udine in northern Italy. It was described as a snake about 4 m long with a head the size of a child’s head and a body the size of a telegraph pole. Before the Tatzelwurm appeared, a high-pitched whistle was said to have sounded.