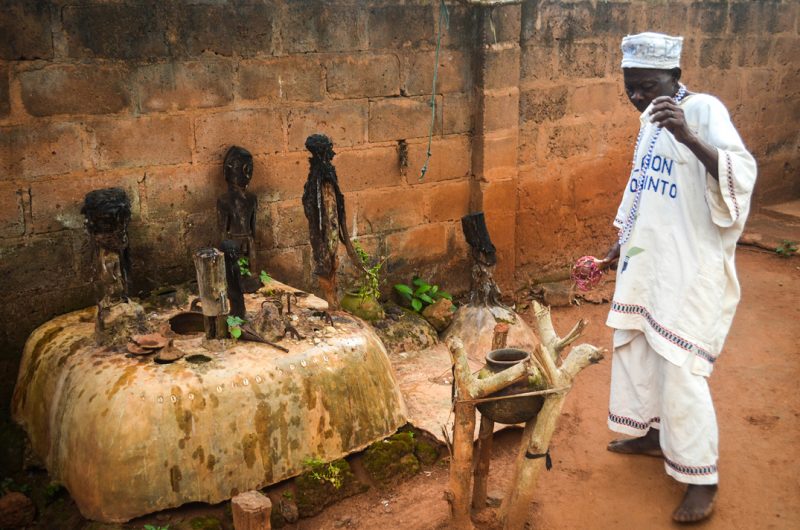 Palo, also known as Las Reglas de Congo, is a religion with several denominations which developed in Cuba among Central African slaves and their descendants who originated in the Congo area.

Denominations often referred to as “branches” of Palo include Mayombe (or Mallombe), Monte, Briyumba (or Brillumba), and Kimbisa. The word “palo” (“stick” in Spanish) was applied to the religion in Cuba due to the use of wooden sticks in the preparation of altars. Priests of Palo are known as Paleros, Tatas (men), Yayas (women) or Nganguleros. Initiates are known as Ngueyos or Pino nuevo.

1. The veneration of the spirits.
2. The belief in natural powers and earth powers.

All natural objects, and particularly sticks, are thought to be infused with powers, often linked to the powers of spirits. A certain number of spirits called Kimpungulu (singular: Mpungu) inhabits the Nkisi (sacred objects; also spelled Enkisi, Inquice, or Inquise). Kimpungulu are well known in name and deed, and are often venerated as spirits with anthropomorphic qualities. They are powerful entities, but they are ranked below the Supreme Creator Zambi or Nzambi, making Palo a henotheistic religion (the belief in and worship of a single god while accepting the existence or possible existence of other deities).

The primary practice of Palo focuses upon the religious receptacle or altar known as “la Nganga”, “el Caldero”, “Nkisi” or “la Prenda”. This is a sacred vessel which helps as a microcosm. Each Nganga is dedicated to a specific Mpungu. Often, this religious vessel is also believed to be inhabited by a spirit of the dead (almost never the direct ancestor of the object’s owner), also referred to as “Nfumbe”, who acts as a guide for all religious activities which are performed with the Nganga.

Various divination methods are used in Palo. Chamalongos uses shells of various materials, often coconut shells. A more traditional method, Vititi Mensú, is a form of envisioning or scrying using a sanctified animal horn capped with a mirror. Denominations are further broken down into temple homes known as Munansós that are headed by an experienced elder priest or priestess. There is no central authority figure in Palo.

Iconography and the lack thereof, is a reflection of dual socio-politics beliefs that have been in opposition for centuries.

Religious syncretism with Catholicism is prevalent within Palo due to the fact that the Kingdom of the Congo adopted the Catholic religion and created a form of Congo-Catholicism as early as the 15th century. Iconography and the lack thereof, is a reflection of dual socio-politics beliefs that have been in opposition for centuries. In Cuba they are categorized as Palo Cristiano (Christian Palo), which uses the crucifix and images of Catholic saints as representations of the Kimpungulu versus Palo Judio (Jewish Palo), where there is no Catholic iconography to be found.

Although the name Palo Judio literally means Jewish Palo the term Jewish as used here does not refer to Judaism; rather it is metaphorical shorthand for “refusing to convert to Christianity”, that is, in the case of Palo, “purely Congo”. Due to the popularity of Kardecian Spiritism *) in Cuba, many temple-houses have made it mandatory to practice seances known as spiritual Misas especially prior to initiation in order to identify spirits guides which will help to develop one’s life. These guides often speak through possession, and may give direct advice. 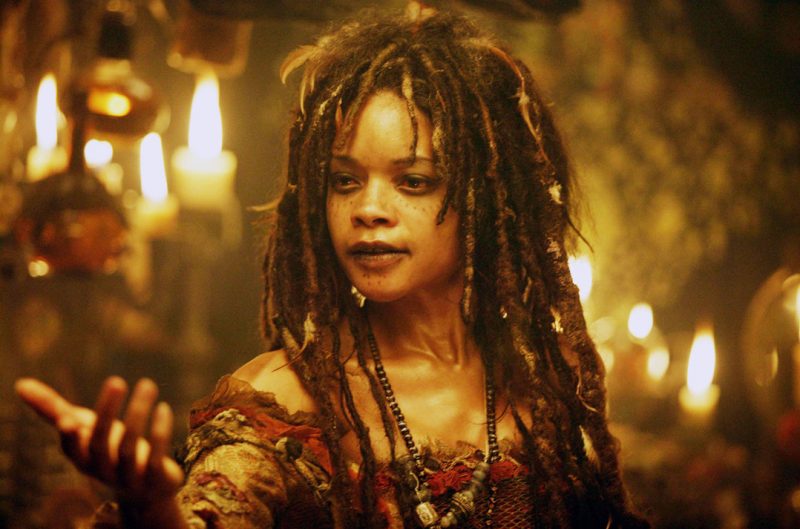 Hoodoo consists of a large body of African folkloric practices and beliefs with a considerable admixture of American Indian botanical knowledge and European folklore. Although most of its adherents are black, contrary to popular opinion, it has always been practiced by both whites and blacks in America. Hoodoo was carried to the United States by West Africans as the result of the Transatlantic Slave Trade. It is a blend of practices from the people of Congo, Benin, Togo, Nigeria and other part of West Africa.

The extent to which hoodoo could be practiced varied by region and the temperament of the slave owners. Enslaved Africans of the Southeast, known as the Gullah, as well as those in Louisiana, were people who enjoyed an isolation and relative freedom that allowed for the retention of the practices of their West African ancestors. Hoodoo, in the Mississippi Delta, where the concentration of enslaved Africans was dense, was practiced, but under a large cover of secrecy. Hoodoo spread throughout the United States as African Americans left the Delta during the Great Migration. The word Hoodoo is a disambiguation of the word “Hudu”, which is the name of both a language and a tribe of the Ewe of Togo and Ghana. Older sources from the 18th and 19th century sometimes use the word Obeah to describe equivalent folk practices. Other regionally popular names for Hoodoo include conjuration, conjure, witchcraft, rootwork, candle burning and tricking.

Hoodoo or Obeah originally was much more entangled with African religious belief and spirituality in the past than it is today.

Most authorities on Voodoo, Santeria and Hoodoo emphasize concerning the mean difference between the two, that Voodoo is basically a religion with initiations in priesthood and Hoodoo is not. Hoodoo uses the magical techniques originating in West Africa without any of the religion. There is no presence of the Nkisi, Orishas, or Loa of Africa. In fact, many people who practice Hoodoo are Protestant Christians. While many Hoodoo practitioners are Protestant Christians, there are some Catholic practitioners who will petition Catholic saints. It’s important to note that they are petitioning the Saints themselves, and unlike in Voodoo, not as a syncretized image for an African deity or spirit. So Hoodoo also differs in this aspect from Voodoo. However, the confusing aspect of this 20th and 21st century Hoodoo profile is that not earlier than in the 19th century Christian influences fused with Hoodoo or Obeah. Hoodoo or Obeah originally was much more entangled with African religious belief and spirituality in the past than it is today. Hoodoo in this historical perspective has flawed into Southern Folk Magic after about one and a half century of syncretic evolution.

According to Carolyn Morrow Long:
“At the time of the slave trade, the traditional nature-centered religions of West and Central Africa were characterized by the concept that human well-being is governed by spiritual balance, by devotion to a supreme creator and a pantheon of lesser deities, by veneration and propitiation of the ancestors, and by the use of charms to embody spiritual power. In traditional West African thought, the goal of all human endeavour was to achieve balance.”

Several African spiritual traditions recognized a genderless supreme being who created the world, was neither good nor evil, and which did not concern itself with the affairs of mankind. Lesser spirits were invoked to gain aid for humanity’s problems. Since the 19th century there has been a Christian influence on hoodoo thought. This is particularly evident in relation to God’s providence and his role in retributive justice. For example, though there are strong ideas of good versus evil, cursing someone to cause their death might not be considered a malignant act. One practitioner explained it ungrammatically as follows:

“In Hoodooism, anythin’ da’ chew do is de plan of God undastan’, God have somepin to do wit evah’ thin’ you do if it’s good or bad, He’s got somepin to do wit it . . . jis what’s fo’ you, you’ll git it.”
(In Hoodooism, anything that you do is the plan of God, God has something to do with everything that you do, whether it’s good or bad, he’s got something to do with it.. You’ll get what’s coming to you.)

Not only is God’s providence a factor in Hoodoo practice, but Hoodoo thought understands God as the archetypal Hoodoo doctor. ♦

*) Kardecian Spiritism. Spiritism is a spiritualistic philosophy codified in the 19th century by the French educator Hippolyte Léon Denizard Rivail, under the codename Allan Kardec. It proposed the study of “the nature, origin, and destiny of spirits, and their relation with the corporeal world”. Spiritism soon spread to other countries, having today 35 countries represented in the International Spiritist Council. Spiritism postulates that humans are essentially immortal spirits that temporarily inhabit physical bodies for several necessary incarnations to attain moral and intellectual improvement. It also asserts that spirits, through passive or active mediumship, may have beneficent or maleficent influence on the physical world. The term first appeared in Kardec’s book, The Spirits’ Book, which sought to distinguish Spiritism from spiritualism.