In Roman culture, Lares, Lemures, and Penates were gods and spirits that were believed to protect and watch over the household and its members. These figures played an important role in daily life and were honored and worshipped in various rituals and ceremonies. 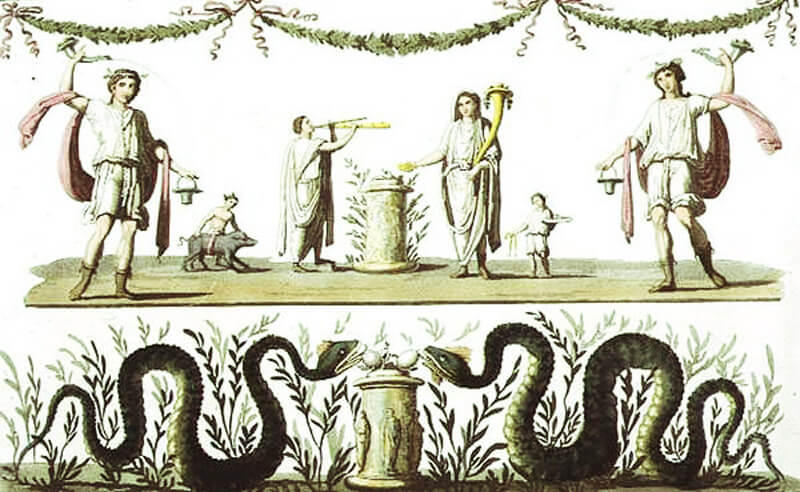 In Roman religion, Lares (also known as Lares Familiares) were the spirits of deceased ancestors who were honored and revered as guardian deities of the household. They were believed to protect and watch over the home, the family, and the property.

They were also associated with the fertility of the land, the harvest, and the prosperity of the household.

Lares were typically represented as small statues, which were kept in a small shrine or lararium, often located in the atrium of the home.

The household would make offerings and perform rituals to the Lares on a regular basis, such as at the beginning of the month, and on special occasions such as weddings and births.

The Lares were also honored during the Compitalia festival, which was held in honor of the Lares Compitales, the guardian spirits of the crossroads.

The Lares were also seen as protectors of travelers and were honored with small shrines, called Lares Viales, along the roads.

The Lares were honored as well in the context of the Roman army and military camps, where they were known as Lares Praestites.

In summary, the Lares were a central part of Roman religious practice and were seen as powerful protective spirits who watched over the household, land, and community.

They were honored and propitiated with regular offerings and rituals, with the belief that they would bring good luck and prosperity to the household.

In Roman religion, Lemures (also known as Lemures, or “ghosts”) were the restless and malevolent spirits of the dead. They were believed to be the souls of the dead who had not received proper burial or funerary rites, or those who had been treated unjustly in life.

Lemures were thought to be responsible for causing mischief and harm to the living, and were propitiated with annual festivals and offerings in order to placate them and prevent them from causing harm.

These festivals were known as Lemuria, and were held annually on May 9th, 11th and 13th. During Lemuria, the head of the household would rise early in the morning and make offerings of beans, which were considered to be the food of the dead, to the Lemures in order to appease them.

In ancient Rome, the Penates were gods of the household and domestic life. They were believed to protect and watch over the home, the family, and the food stored in the pantry.

The Penates were typically depicted as young men or boys, and were often accompanied by images of food and household items.

They were considered to be very important in ancient Roman religion and were honored in many households throughout the Roman Republic and Empire.

It is likely that the Panates have substantially influenced, or merged with, the traditions of  household spirits in medieval Europe and later periods.

Worship of Lares, Lemures, and Penates 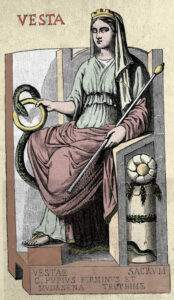 In Roman culture, the honoring and worship of Lares, Lemures, and Penates were an important part of daily life, and played a central role in maintaining the spiritual well-being of the household.

These figures were believed to bring protection, prosperity, and security to the family, and their rituals and ceremonies were seen as a way of ensuring the continued well-being of the household.

It’s important to note that Lares, Lemures, and Penates were part of the Roman traditional religion, which coexisted with the official state religion, which was polytheistic too, but with different gods and rituals.

The Roman traditional religion was more related to the ancestor’s worship, the protection of the family, and the private sphere. While the state religion was more focused on the public sphere, and the honoring of the gods that protected the Roman state and society.

You may also like to read:
Charles-godfrey-leland the American folklorist who saved European witchcraft
Orcus in astrology – The meaning of this binary Plutino in a horoscope
Witch bottles were and are used for protection when other means fail
The witches of Benevento and their secret walnut tree | Stregheria – steghe
Walpurgis Night
Jack o lantern
The Banshee
Black Cat Superstitions
An Authenticated Vampire Story
Mysteries of the Ancient Oaks
The Imp or Witche’s familiar
The Witche’s Ointment
Spirit beings in european folklore
Join us on Telegram