A gris-gris or gris-gris bag is a protective amulet that brings good luck and chases demons away. The word gris-gris – of African origin – means “fetish” or “charm”; thus a gris-gris bag is a charm bag. It was introduced into France in the 16th century as grigri or gri-gri, whose plural is gris-gris or grisgrís. Strangely enough originally Grisgris was a demon, a bringer of bad luck. It is still possible that someone who travels through the Sahel or the Gulf of Guinea will be given a gri-gri, as it is pronounced, to protect this person from bad luck, as in Africa it is still part of the tradition. 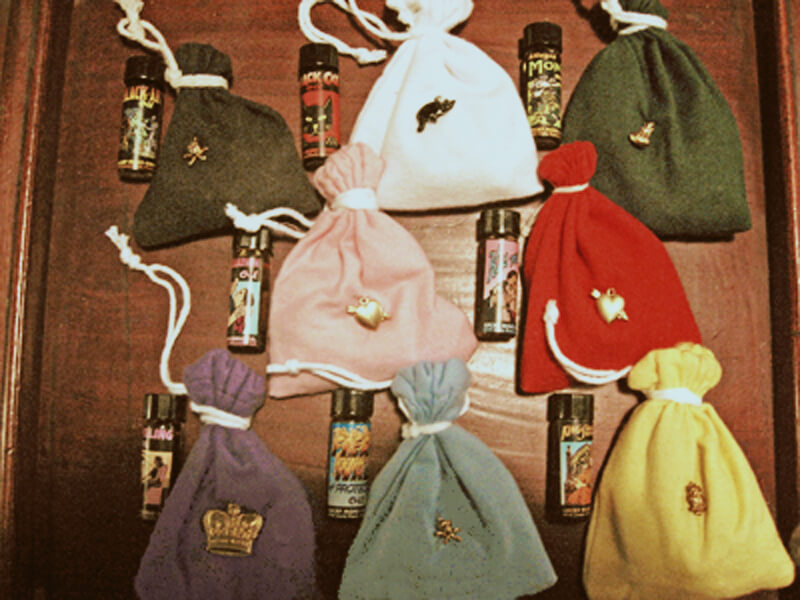 The gris-gris is usually a small bag made of fabric or skin that you must carry with you, in which there is a mixture of herbs, oils, stones, bone, hair, nails and other personal elements, gathered with the blessing of a god. Usually you prepare it yourself for your own protection.

Taken by slaves to America of Yoruba and Hausa origin, and introduced into voodoo, the gris-gris remains a protective amulet or talisman possessing juju, magical power. A good gris-gris made in New Orleans must be prepared on an altar containing the four elements: earth, air, water and fire, i.e. salt, incense, the liquid element and the flame of a candle.

There can be more than thirteen ingredients in the gris-gris, including stones and objects colored by their hidden and astrological meaning. The gris-gris of the New Orleans voodoo queen Marie Laveau is said to have carried bits of bone, coloured stones, cemetery dust, salt and red pepper.

In Santeria, the gris-gris sachets are called resguardos or protectors, and are dedicated to the saints, such as the “resguardo a San Miguel Arcángel” or dedicated to Shango (Santa Bárbara), the god of thunder (which contains herbs, spices, brown sugar, stones or other sacred relics). But not only protective resguardos are sold.

There is a seven knots-gris-gris for example, used to knot the will of man or woman, which functions as is an amulet for domination. The last option is a specialty of the mayomberos, sorcerers of the Palo religion, and in Africa the nganga nkisi, sorcerers, prepare similar amulets, like the makutos and the gurunfindas (of Gurunfinda, god of the forest and of the herbs, associated to San Silvestre).

These gris-gris bags contain tropical plants and other elements like hearts of birds and turtles, hair of corpse and coins to obtain the help of the spirits of the dead. 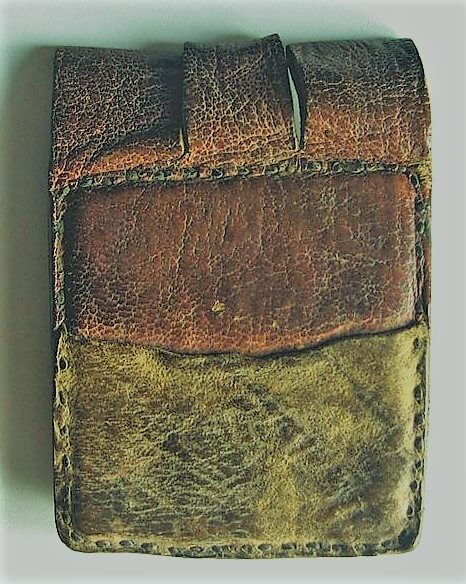 Tuareg gris-gris made of leather

As pointed out above, the gris-gris was developed further in the Southern states of the US. In Hoodoo, a mojo bag is an amulet consisting of a flannel bag containing one or more magical items. It is a “prayer in a bag”, or a spell that can be carried with or on the host’s body.  Alternative American names for the mojo bag include gris-gris bag, hand, mojo hand, conjure hand, lucky hand, conjure bag, trick bag, root bag, toby and jomo.

The most common synonym for the word mojo is still “gris-gris”. In the Caribbean, an almost identical African-derived bag is called a wanga or oanga bag, but that term is uncommon in the United States. The word conjure is an ancient alternative to “Hoodoo”, which is a direct variation of African-American folklore. Because of this, a conjure hand is also considered a hoodoo bag, usually made by a respected community conjure doctor.

The word hand in this context is defined as a combination of ingredients. The term may derive from the use of finger and hand bones from the dead in mojo bags, or from ingredients such as the lucky hand root (favored by gamblers). The latter suggests an analogy between the varied bag ingredients and the several cards that make up a hand in card games.

Mojo reaches as far back as West African culture, where it is said to drive away evil spirits, keep good luck in the household, manipulate a fortune, and lure and persuade lovers. The ideology of the ancestors and the descendants of the mojo hand used this “prayer in a bag” based on their belief of spiritual inheritance, by which the omniscient forefathers of their families would provide protection and favor, especially when they used the mojo. Through this, a strong belief was placed in the idealism of whomever used mojo, creating a spiritual trust in the magic itself.

The contents of each bag vary directly with the aim of the conjurer. For example, a mojo carried for love-drawing will contain different ingredients than one for gambling luck or magical protection. Ingredients can include roots, herbs, animal parts, minerals, coins, crystals, good luck tokens, and carved amulets. The more personalized objects are used to add extra power because of their symbolic value. 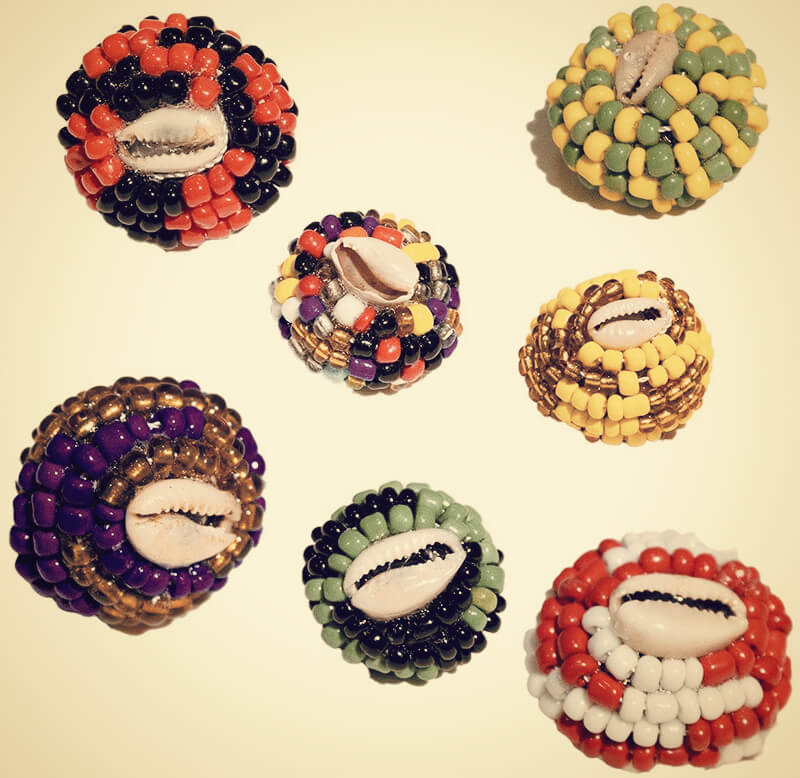 Makutos, the gris gris used in Santeria and Palo

Activating and feeding a mojo bag

There is a process to fixing a proper mojo. A ritual must be put in place in order to successfully prepare a mojo by being filled and awakened to life. This can be done by smoking incense and candles, or it may be breathed upon to bring it to life. Prayers may be said, and other methods may be used to accomplish this essential step. Once prepared, the mojo is “dressed” or “fed” with a liquid such as alcohol, perfume, water, or bodily fluids. The reason it is said to feed the mojo to keep it working is that it is alive with spirit. One story from the work entitled From My People describes a slave who went out and sought a mojo conjurer that gave him a mojo to run away from home. The story describes the slave’s mojo as fixing him into many formations, and he ultimately dies because he misuses its power. Had he fixed and believed in the specific mojo himself, he might have escaped the plantation alive.

Mojos are traditionally made for an individual and so must be concealed on the person at all times. Men usually keep the trinkets hidden in the pants pocket, while women are more prone to clip it to the bra. They are also commonly pinned to clothes below the waist. Depending on the type of mojo, the hiding place will be crucial to its success, as those who make conjure bags to carry love spells sometimes specify that the mojo must be worn next to the skin. A story from the book From My People described the story of Moses and the task he went through to bring his people out of slavery. It described how “Hoodoo Lost his Hand”, as Moses’s mojo was hidden through his staff. When he turned it into a snake, the pharaoh made his soothsayers and magicians create the same effect. As a result, the Pharaoh’s snake was killed by Moses’s snake, and that is how Hoodoo lost his hand. 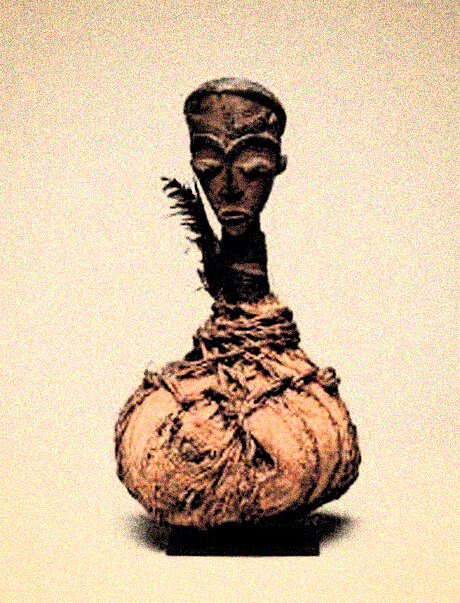 The Borfima is a magical medicine bag like a gris-gris or mojo-bag but of a very dark genre. It was used in the early 20th century by the members Sierra Leone Human Leopard Society. The word borfima is a contraction of Boreh fima, “medicine bag”, and is usually, but not invariably, tightly bound up in a leather package.

This package contains, amongst other things, the white of an egg, the blood, fat, and other parts of a human being, the blood of a cock, and a few grains of rice; but to make it efficacious it must occasionally be anointed with human fat and smeared with human blood. So anointed and smeared, it is an all-powerful instrument in the hands of its owner, it will make him rich and powerful, it will make people hold him in honour, it was believed it would in cases in the “White Man’s Court”, and it certainly had the effect of instilling in the native mind great respect for its owner and a terrible fear lest he should use it hostilely.

An oath administered by the proper person and with due ceremony upon Borfima is of the most binding nature, and it was by means of such oaths that great secrecy was obtained. But the potency of this great fetish apparently soon evaporated. Owners of the Borfima found that their riches did not increase as rapidly as they anticipated, they lost cases in the Courts, expectations were not realized with respect to adverse witnesses upon whose hearts and livers and kidneys imprecations had been showered—all this showed that the Borfima had become weak and needed resuscitation with fresh human fat and blood—and to obtain this human fat and blood was the primary object of the Human Leopard Society.

The early 20th century showed an increase number of occult murders by the Human Leopard Society of Sierra Leone. The main reason for the killings was to obtain human fat for anointing a terrible fetish called the Borfima, whose black magic depended on the frequency with which it was “fed.” These killings got mixed with ritual cannibalism, of which the first reports for this area date back to 1609.