The Aitvaras or Aitvars is a nature spirit in Baltic, especially Lithuanian, folklore and mythology. Several folklorists and micro-historians such as Wilhelm Mannhardt, W. R. S. Ralston, Claude Lecouteux, and others have pointed out that, until about a century ago, most European folk spirituality focused on maintaining good relations with household and field spirits. Slavic regions have their own classes of these beings, of which the Domovoj or Domovoy is the best known. The Aitvaras, with its fiery and airy nature, is a strange exception to the class of house spirits or fairies, whose nature is usually dominated by the Earth element. 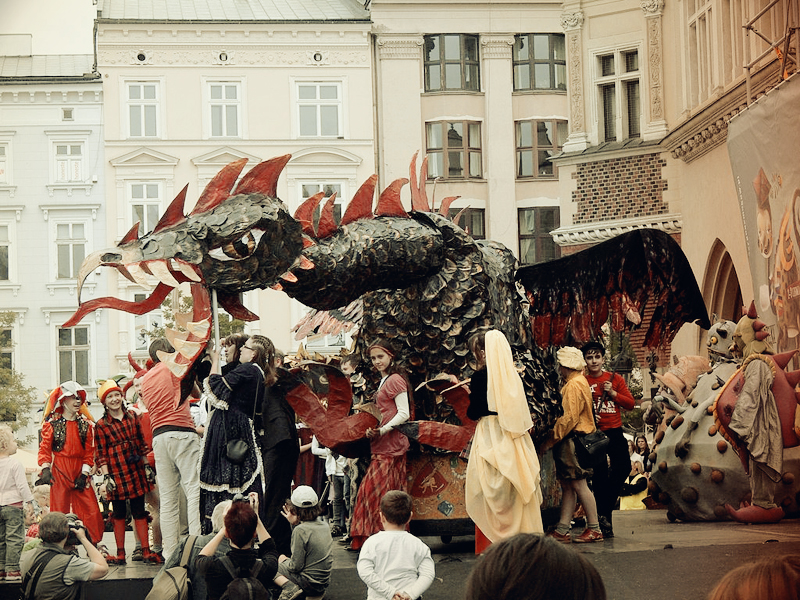 Aitvaras figure in the Parade of Dragons in Kraków in 2012

In Latvian mythology Aitvaras is related to Välnäs and corresponds to Puke or Pūķis. In Slavic mythology in general he is close to the “Fire Snake”. According to one version, the word Aitvaras came from the Lithuanian aiti (tramp, twirler, tomboy) and varas (very fast movement). According to another version, the name is connected to the word aitauti (calm, quiet), but this version is less common.

Before the spread of Christianity, Aitvaras was probably an upper-order deity, governing the wealth and relationships of people. The creature lived in the sky or in the forests. In some Lithuanian representations, covered for example, in the émigré-newspaper Renaissance, Aitvaras is “a forest spirit running as a wind through the treetops. If one throws a knife into the whirling whirlwind, one may injure Aitvaras”. Legend has it that if you throw a splinter towards Aitwaras, a coin will fly back. But one shouldn’t abuse the serpent’s generosity – it may get offended and stop helping. The creature moves by flying and he is mostly fiery, but it can change its appearance. 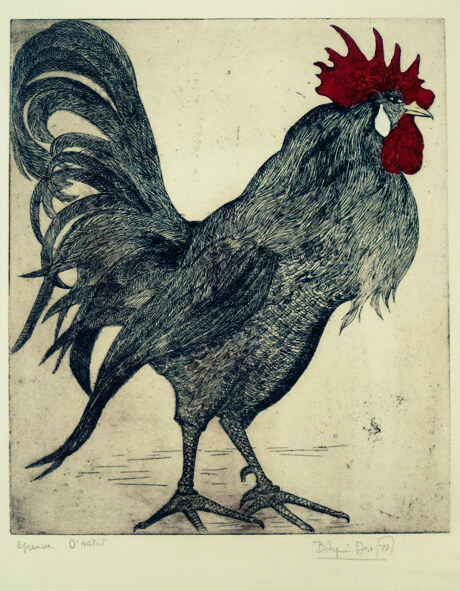 Black rooster, one of the appearence forms of the Aitvaras

An Aitvaras looks like a white or black rooster with a fiery tail like a meteor and can act as a protective and benevolent home-spirit. An Aitvaras is said to emerge from an egg of a 9- to 15-year-old rooster, or from the testicle of a black stallion. It can be attracted by egg-rich food, but, according to the general Aitvaras-folklore, the creature can be obtained in only two ways:
– either by selling the soul (not necessarily your own) to the devil,
– or by breeding yourself. This is believed to be done by keeping a black rooster (or a rooster with a colourful bright tail) in the house for seven years until he lays an egg. The rooster has then to hatch the egg himself. Compare this the the legend of the Basilisk, which was also born from a rooster egg. The idea of a rooster egg may sound a absurd, however it is a scientific fact that chickens can change their gender under special circumstances.

An Aitvaras will lodge itself in a house and most often refuse to leave. He brings grain, milk, hony, gold and other wealth, which he sometimes steals from the neighbours. If he is angered, he burns down the house. The creature was first mentioned in 1547 by Martynas Mažvydas. Later sources also compare it with the incubus.

The other shapes of the Aitvaras

In some aspects there is a similarity to the Alp. Otherwise, it is compared to the snake or, more frequently, to the dragon – the children’s toy “dragon” is accordingly called “aitvaras” in Lithuanian. In Lithuanian mythology, Aitvaras is a red flying spirit in the form of a fiery serpent, a dragon leaving a trail of fire in the sky. After the rise of Christianity Aitvaras began to be counted among a class of devils and witches, presenting them as a black crow, heron, black or fiery rooster, rarely a cat, walking unnoticed in the daytime and turning at night into a dangerous dragon.

There was a popular fable that such a dragon could steal a human soul and send it straight to hell with a wild scream. The Aitvaras is also described as a bird (mostly a rooster) when it dwells indoors and while outdoors it looks like a dragon. The Lithuanian linguist from France A. Greimas notes that the Aitvaras eats eggs, entertains himself by plaiting horses’ manes and sending nightmares to people. It is believed that a mistress in a house where Aitvaras lives will constantly be ill. Getting rid of the creature is possible, but a difficult and very dangerous undertaking. If the Aitvaras becomes a nuisance, he can be driven away or killed. The latter, however, will bring a terrible fire to its murderer’s house. According to church beliefs, Aitvaras can return again even after being banished from the house with holy water. If an Aitvaras dies, it becomes a spark. 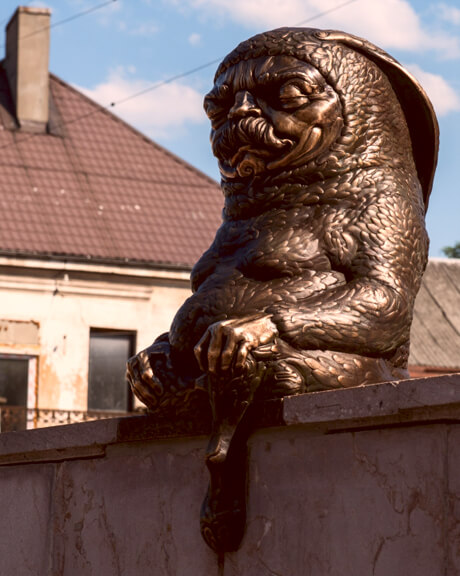 As a genus of the air and fire beings, the Aitvaras is opposed to the chthonic Kaukai, Kaukuchus or Barzdukkas or Bezzdukken. In the 17th century Matthaeus Praetorius described these differences as follows:

“Until our time the Nadravians also call the Kaukuchus the Barzdukkas, whom they accuse of stealing crops and goods of all kinds. They distinguish them from the Aitvars also called Alf especially:
– by place of residence, because the Barsdukkas lives on the ground, while the Aitvars lives underground;
– by appearance: the Barzdukken take human form, while the Aitvars appear in the form of a dragon or a giant serpent whose head is on fire;
– by actions: the Bezzdukken do no harm to the people they cling to (and even provide them with goods), while the Aitvars harm them;
– by food: The Kaukuchen are provided with milk, beer and other drinks, while the Aitvars must be offered only boiled and roasted foods, novelties and dishes that no one has yet tasted.”

Via its serpent shape the Aitvaras is sometimes associated with the Baltic snake cult. This cult is referred to by Matthew Praetorius who writes about the Zaltones, or Lithuanian snake charmers. The name is derived from the Lithuanian žaltys and Latvian zalktis (grass snake). Among the Baltic peoples, the veneration of the snake has been attested until modern times. Among the Lithuanians and Latvians, grass snakes were kept as pet snakes and fed with milk. It was considered the protector of livestock and could be equated with the Latvian piena māte (“milk mother”). In a Lithuanian folk song, the grass snake is called the “emissary of the gods”. A Lithuanian proverb reads:

“The view of a dead Žaltys makes the sun weep.”

They were sometimes used to interpret the future and were also otherwise associated with superstitious practices. Keeping snakes and feeding them with milk is also attested for the Prussians and is said to have been worshiped as an idol of the god Potrimpos, according to Simon Grunau. 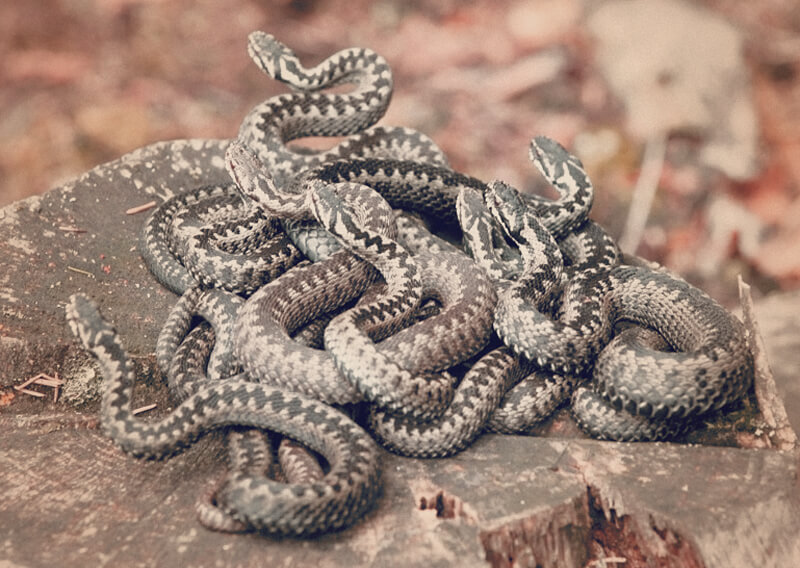 Among the Baltic peoples, the veneration of the snake has been attested until modern times.

In Finnish folklore, Ajatar, also spelled Ajattara, Aiätär, or Aijotar, is an evil female spirit. She lives in the woods located at the mountains of Pohjola. She is described as having “hair-plait reached to her heels and whose breasts hung down to her knees” similar to the Swedish Skogsnufva, Danish ‘Seawoman’, or the Wildfraulein of the eifel.

In Finnish mythology Ajatar is the granddaughter of Hiisi (the master of the woods and spreader of disease) and is the master of Lempo and the Gnomes. Through her connections with Hiisi and Lempo, she is said to spread disease and pestilence. She is closely associated with serpents, and is often depicted in modern art as a dragon or half-humanoid and serpentine figure.
The word ajatar is possibly derived from the Finnish word ajattaa, (to pursue, to drive). The feminine suffix -tar- appears in several Finnish names, including a variation of Louhi (Louhetar, Loviatar, Louhiatar) and Syöjätär (syödä ‘to eat,’ with the feminine suffix of -tar, means devourer, vampire). Applying this to Ajatar, the verb ajaa is suffixed by the feminine -tar, translating as female pursuer. The name may as well have its root in aika (time), from where ajatar would be an equally regular derivative.