Nazi UFO information is rapidly banned from the ‘official Internet’. I mean the internet that embraces the new neoliberal new speak world dictatorship. Though a fascinating subject, reliable information on the apocryphal science of the Nazis is difficult to find. The main reason has always been the free energy based technology which fueled the nazi ufo, while the anti mainstream science openess under Hitler’s reign, which paradoxically opened a whole new field of research, is not welcomed by today’s “state science” either. Especially Victor Schauberger is a pain in the ass, as he is difficult to remove from the official information zone. 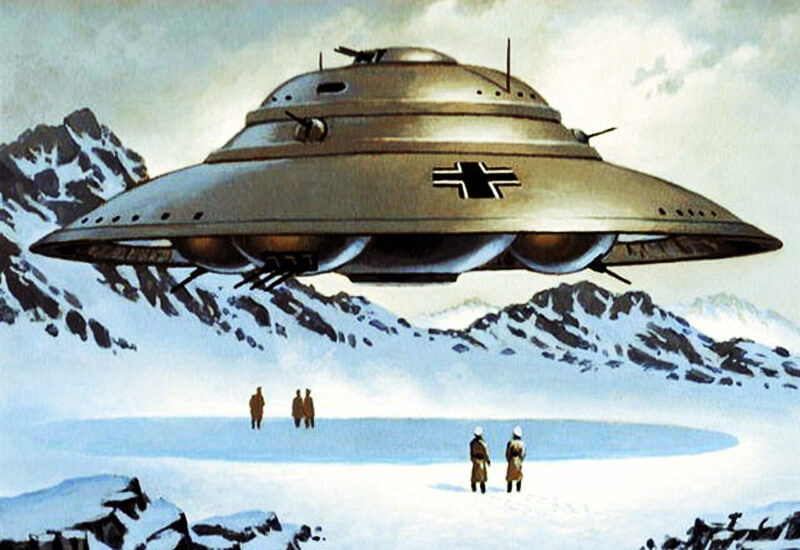 A third reason for the mists that cloak and mystify the subject, results from the first two: much UFO information is – often deliberately – mingled with fantasy and misinformation on the internet. This article is meant to shed some light on these flying machines, free from any politicized censorship, commonly known as “official science” – which is of course nothing but an administrative repression and brainwash instrument that has nothing to do with science based on truth seeking whatsoever.

During the Interbellum several occult or semi-occult societies were founded in Germany, which would later play an important role in the production of German Rundflugscheibe as they were called. One of the Godfathers of modern geopolitics Karl Haushofer a society called Brüder des Lichts (Brothers of Light) which was later renamed Vril Gesellschaft (Vril Society – named after the mysterious energy Vril in Bullwer Lytton’s novel Vril, the Power of the Coming Race.). The Vril Gesellschaft united Die Herren vom Schwarzen Stein (The Lords of the Black Stone) – DHvSS – and the Schwarze Ritter (Black Knights) of the Thule and SS-elite Schwarze Sonne. The Thule Society was more politically orientated while the Vril Society aimed at exploration of das Jehnseits (the other side). 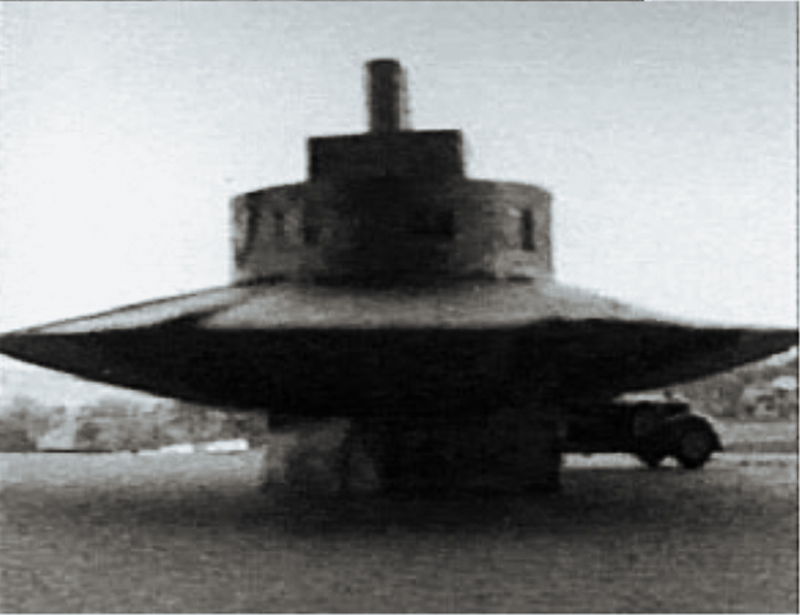 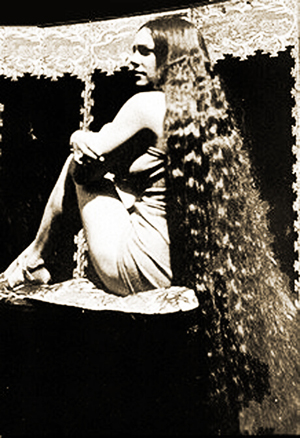 In December 1919 a small circle of members of the Thule, Vril and DHvSS societies rented a forester’s lodge near Bertesgaden, Germany, accompanied by Maria Orsic and a woman called Sigrun. They were psychic mediums that wore a horse-tail hairstyle. They believed that their long hair acted as cosmic antennae to receive alien communication from beyond. So this is where the Vril disc story begins. Maria Orsic, also known as Maria Orschitsch was a famous medium who became the leader of the Vril Gesellschaft. She was born October 31, 1895 in Vienna (Austria). Her father was a Croatian immigrant from Zagreb, her mother Austrian.

Orsic had mediumistically received transmissions in a secret Templar script – a language unknown to her – with the technical data for building a flying machine of the saucer type. According to Vril-documents the telepatically received information came from the solar system of Aldebaran in the constellation Taurus. The distance Earth Aldebaran is 68 light years. All further Vril Society actions were then based on the messages the mediums kept receiving.

The Aldebaran system and the colonisation of Earth

The Aldebaran-system had a sun around which two inhabitat planets were orbiting that formed the empire of Sumeran. The population consisted of several colored races which were lead by a master race. Due to some climatological disaster the ‘lower races’ lost their ability to move between planets and had to be evacuated to other inhabitable planets. This colonization of other areas of the universe starte 500 milion years ago. Jan van Helsing, one of the sources for this article, links this to the Meister footprint in his book Secret Societies. [1] The first planet in our solar system was Mallona, which existed between Mars and Jupiter in the current asteroid belt. The second was Mars. Then came Earth where they colonized Mesopotamia and formed the master class of the Sumerians. The Vril mediums later associated the Sumerian language with the language of the Aldebaran-system and unintelligible German. 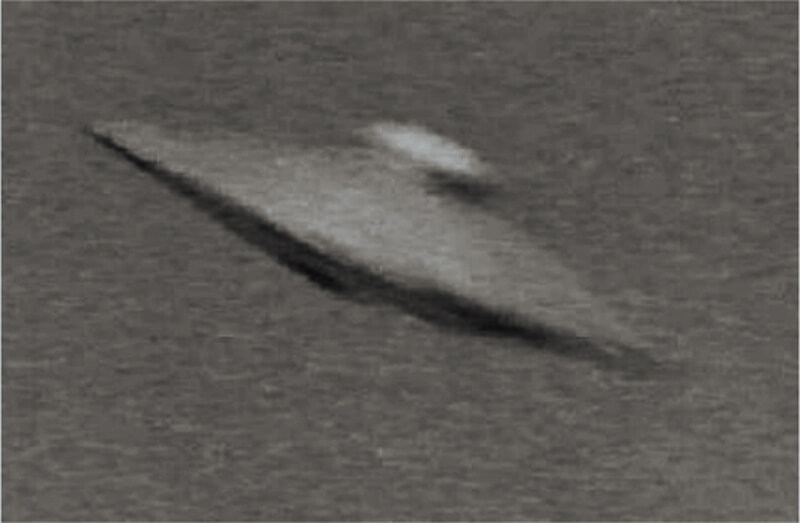 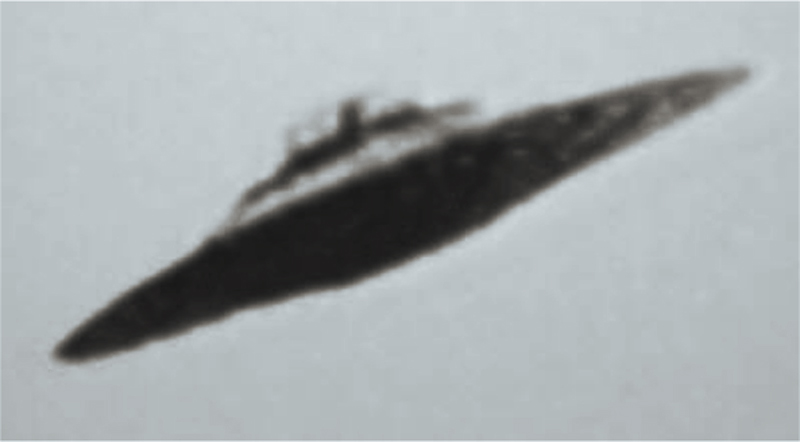 Dr. W.O. Schumann and the building of the Jehnseitsflugzeug

In 1922, three years after Maria Orsic channelled the data for the construction of “das Jehnseitsflugzeug”, the Germans started building one. Their apocryphal engineering mingled with dualistic theology, as we can conclude from a speech held by W.O. Schumann, both a Thule and Vril member and employed at the Munich Technical University.:
“In everything we recognize two principles that determine the events: light and darkness, good and evil, creation and destruction – as in electricity we know plus and minus. It is always either – or.
These two principles – the creative and the destructive – also determine our technical means…
Everything destructive is of Satanic origin, everything creative is divine…
Every technology based on explosion or combustion has thus to be called Satanic. The coming age will be an age of a new positive, divine, technology!”

This idea was pretty much in line with Victor Schauberger and his implosion technology. Though Schauberger hated the nazis, he was forced to build certain machines for them.

In the summer of 1922 the first Rundflugscheibe was build, using implosion technology. It consisted of tree discs on top of each other. In the activeted ste the top and bottom disc revolved in opposite directions to create an electromagnetic rotating field. Experiments were carried out for two years before the machine was dismantled and most likely stored in the Augsburg works of Messerschmidt. In the books of several German industrial companies entries under the code name JFM (Jehseitsflugmachine) can be found that show payment to finance this work. The Vril Drive, which was formerly called the Schumann SM Levitator emerged from this experimental machine.

With the Nazi Party in power in 1933 (which itself originated from the Thule Gesellschaft) the occult scientists now received official backing for their continued development of the flight discs. Thule and Vril started with the RFZ (RundFlugZeug, or Round Aircraft) series from 1934-41.

In 1934 the first almost succesfull flying machine was build in the aircraft factory Arado in Brandenburg under the learderschip op Dr. W.O.Schumann. It was named RFZ-1 (Rundflugzeug 1) due to its saucer shape. It rose up from the ground vertically up to 60 meters, then started to wobble, on which the pilot Lothar Waiz reacted by bringing it to the ground and jumping out of the saucer as it started to rip itself to pieces. 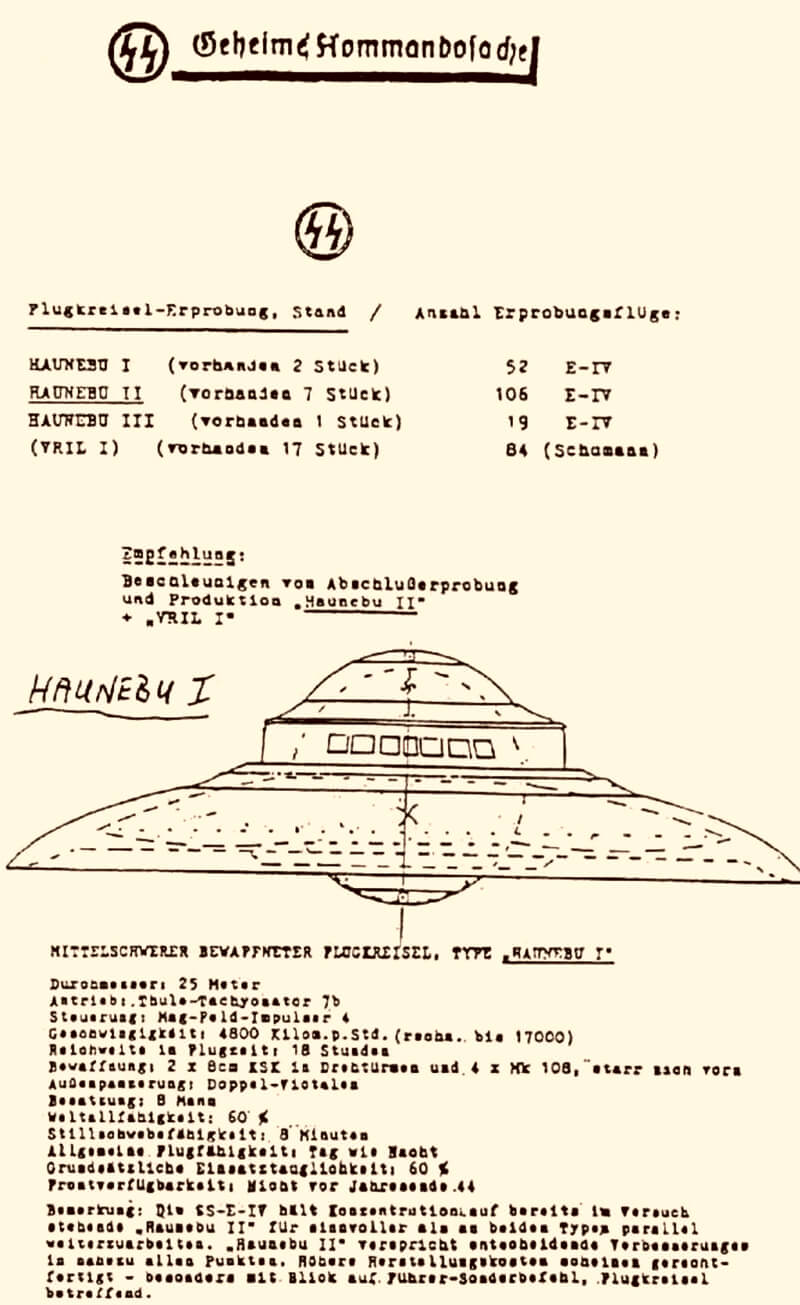 Before the end of 1934 the RFZ-2 was finished, with a Vril drive and a magnetic field impulse steering unit. It had a diameter of 5 meter. With rising speed the visible contours of the saucer blurred and the craft showed the colors, typically for UFO’s with a Vril-drive: red, orange, yellow, green, white, blue, purple. It worked and the craft was used for transatlantic flights. By the end of 1941 it was photographed over the southern Atlantic on its way to the German cruiser Atlantis near the Antarctic. The impuls steering allowed only changes of direction at angles of 90, 45 or 22,5 degrees.

Following this success the Vril Geselschaft was granted it own testing ground near Brandenburg and by the end of 1942 the Vril-2-Jäger was born – the first armed saucer. It measured 11,5 meters across, had a Schumann-Levitator drive and magnetic field steering drive and could reach a maximum speed of 12000 km/hour. It could change direction at full speed at 90 degrees without effecting the pilot. In total 17 Vril-1’s were build. They had a glass dome were the pilot was seated.

Simultaneously the engineering groups Schriever-Habermohl and Miete-Belluzo worked on a saucer type called RFZ-7. Most of these craft had severe shortcomings, but at the end they build the RFZ-7 T, with a tachyon drive which was more succesfull. These saucers were huge compared to their predecessors and measured 42 meters in diameter. 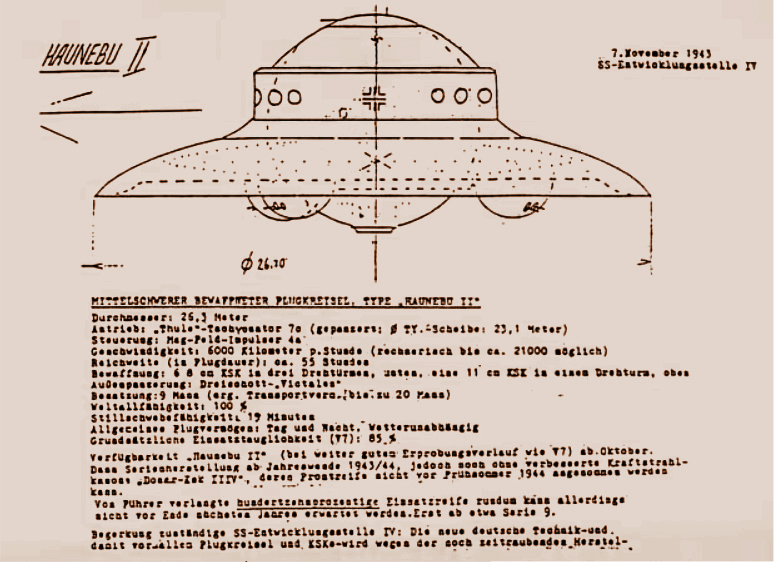 The SS had a special study group for alternative energy SS-E-IV. Its main task was to render Germany independent of foreign oil. The SS-E-IV developed the so called Thule drive, based on both the Vril drive and the tachyon convertor of Captain Hans Coler. Later it was named the Thule Tachyonator. In 1939 the first RFZ-5, also called Haunebu-I, took of, an armed saucer that measured 25 meter across and could carry a crew of eight. It was armed with four machine guns and two 6 cm KSK’s (Krafstrahlkanonen – Power ray guns) and reached a top speed of 17000 km/hour.

By the end of 1942 Haunebu-II was ready. This engine was produced in two measures: 26 meters across and a height of 9 meters and 32 meters across with a height of 11 meters. They could carry between nine and twenty people. Near the ground they could reach a speed of 6000 km/hour. It could also fly in space and stay in the air for fifty-five hours. Haunebu III was build, measuring 72 meters across and capable of carrying 32 men. It could stay in the air for 8 weeks and secret SS-archives mention a maximum speed of 40000 km/hour. 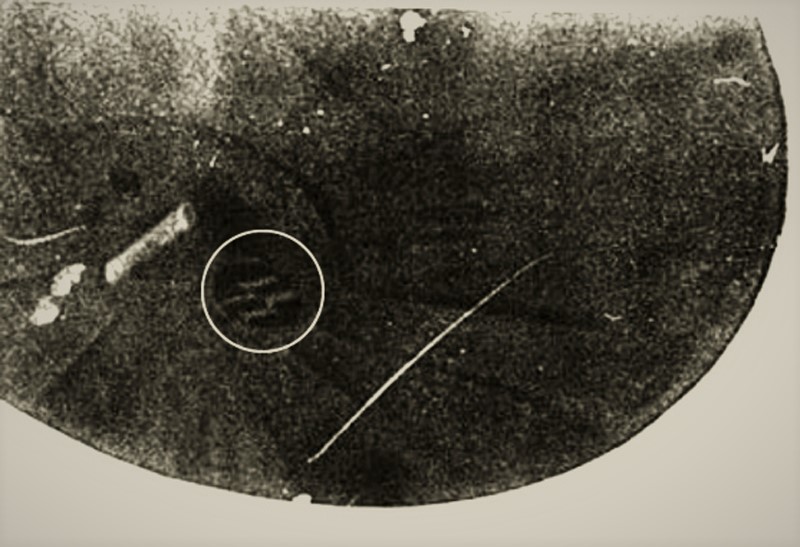 ss-runes on a nazi ufo 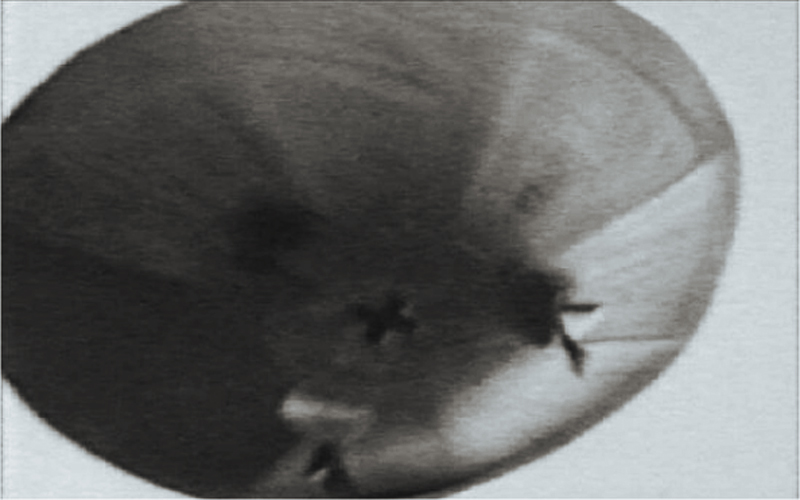 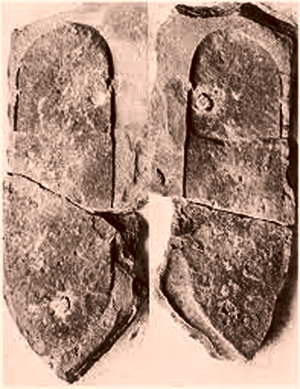 According to Dr. Melvin Cook (1970), a local rockhound named William J. Meister was hunting for trilobite fossils along a hillside near Antelope Springs, Utah in 1968 when he broke open a slab and discovered a curious oblong marking that he took for a human sandal print. This was quite surprising, since the rock at this locality is identified as the middle Cambrian Wheeler Formation–over 500 million years old.
The supposed print measured approximately 10 1/2 inches by 3 1/2 inches, and occurred on both sides of the slab (with opposite relief). The specimen included what Meister took as a heel demarcation, as well as at least two small trilobites (extinct, superficially crab-like arthropods). Shortly after Cook’s report, other creationists (Kofahl and Segraves, 1975; Baker, 1976; Wysong, 1976; Huse, 1983; Petersen, 1987) cited the Meister find as anti-evolutionary evidence.