Share
Sak Yant tattoo is common in Southeast Asia and is distinct for its monochromic and geometric patterns, passages from religious classics, and animal images. Only Sak Yant masters can perform this tattoo. They mix snake venom, herbs and cigarette ash into the ink they use. However less romantic ink recipes are also mentioned as well as different ink compositions for men and women.
This tattoo is believed to give its bearers holy powers which protects them from evil. However, it won’t work if they don’t obey certain rules – not to drink, steal, kill and perform sexual misconduct. If a devotee missed in any of these, he needs to be at the festival to renew its power.
The annual rite commences at exactly 9.39 in the morning. It’s date varies from year to year but should be in early March and on a Saturday. 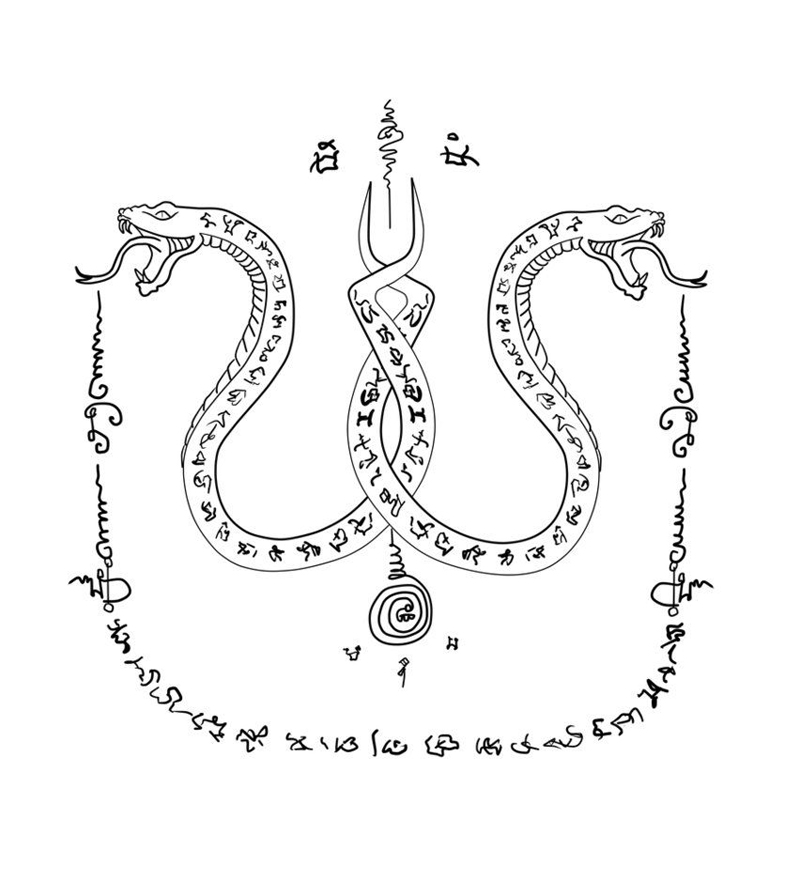 The Wat Bang Phra monastery  hosts a gathering every year with over tenthousanth participants. The monastery is known for giving tattoos daily, which are mostly performed by the monks who live there. These tattoos are believed to be endowed with magic and to have protective power. During this deeply spiritual event, these tattoos are once again blessed by the monks, which is said to refill them with power and magic energy.

Wat Bang Phra (Thai: วัดบางพระ) is a Buddhist monastery (wat) in Nakhon Chaisi district, Nakhon Pathom Province, Thailand, about 50 km west of Bangkok. Wat Bang Phra translates into English as the “Monastery of the Riverbank Buddha Image,” a reference to the temple’s history as a spot where a revered Buddha image from Ayuthaya was recovered from a boat which sank in the Nakhon Chaisi River alongside where the monastery was founded.

The history of Wat Bang Phra

Wat Bang Phra dates to the late 18th century, just before the second fall of Ayutthaya. A small, elegant ordination chapel represents the only significant remains of the original monastery today. Inside sit two Buddha images, Luang Pho Sit Chaiyamongkon and Luang Pho Kai Sitmongkhon, which, according to legend, were being transported downriver from Ayutthaya to save them from plundering Burmese troops when the boat carrying them capsized. When the images were later pulled from the river, they were kept in the monastery that came to be known as Wat Bang Phra.

The murals inside the original ordination hall demonstrate craftsmanship from the reigns of Kings Rama III and Rama IV. Former abbot Phra Udom Prachanart, more commonly known as Luang Phor Pern, was a famous meditation monk well known for his potent incantations and his knowledge of the body of Buddhist canons (Tripitaka) and most of all his mastery of protective sak yant (sacred Thai tattoos).

Luang Phor Pern ordained as a monk at Wat Bang Phra at the age of 25 and studied with abbot Luang Pu Him Inthasoto, an accomplished sak yant master. Even though Luang Phor Pern had never been tattooed himself (and never would be), he took up the sacred art at Luang Pu Him’s feet and carried on the tradition after Luang Pu Him died four years later.

In 1953, feeling he needed further withdrawal, renunciation and solitary meditation, wandered in the forests of a remote area of Kanchanaburi Province on the Myanmar-Thailand border. Villagers in the area were beleaguered by wild tigers that had mauled or killed several locals. After Luang Phor Pern learned of the villagers’ predicament, he offered katha (incantations) and sak yant to protect them. He taught them that tiger yantras, in particular, could fend off attacks. From that point forward, no one who received the monk’s protection was ever attacked by a tiger or other wild animal, earning Luang Phor Pern a powerful reputation as a master of incantations and tattoos.

Returning to Wat Bang Phra many years later, he was made abbot used temple donations to build a bridge over the adjacent river so that farmers could more easily bring their crops to market in Nakhon Chaisi or beyond, and constructed the local public hospital that today bears his name. As his reputation for wisdom and loving kindness grew, thousands of Thais travelled to Wat Bang Phra to receive the blessings of the great monk and to become his lifelong disciples. Many received sak yant from the abbot and the monks he assiduously trained.

By the time Luang Phor Pern died in 2002 at the age of 79, he had become one of Thailand’s most well-known and beloved monastics. Because of Luang Phor Pern’s association with the border tiger legend, devotional images of the late monk today often depict him meditating on the back of a tiger. 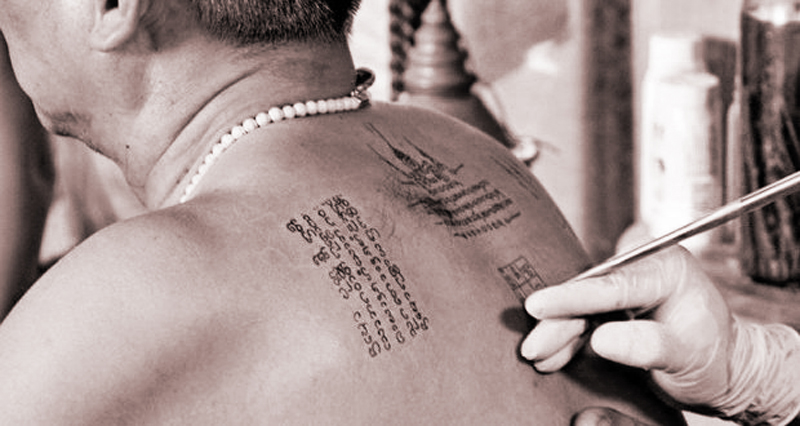 Tattooing goes according to strikt rules.

The magical tattoos are known as Yantra or Sak Yant. They are tattoos which are being tapped into the skin as a mystical diagram. Yantra tattooing is thought to have originated in Cambodia, but now the technique is used throughout Southeast Asia. In Thailand, both the process and the actual Yantra are seen as sacred. Only monks and trained laymen are allowed to give a tattoo on temple grounds. Those who receive the Yantra are required to follow rules provided by the monk who blesses them, and if these rules are broken or ignored, the power and magic in the tattoo is believed to cause more harm than good. The rules are often based in the five Buddhist precepts, or can be about the avoidance of a certain type of food.

Starting on the evening before the ceremony, the tattoo masters give over one thousand bamboo tattoos. This all-night process continues until the next day when the festivities commence. The ritual on the day of the ceremony is a very specific series of events. Inside the temple, flowers and incense are sold. The person wishing to be tattooed will purchase them with the intent to offer them as gifts to Buddha. They will also provide a separate offering to the monks. Once the offering has been accepted, a monk will bless them. Afterward, there is a series of prayers and incantations. This is where the tameness of the ceremony ends. Eventually, the energy in the crowd builds and the participants enter a trance state called Khong Khuen (“magical force rising”) and the event turns wild. Thailand is no stranger to wild festivals and gatherings, but many believe that this event is the wildest.

The trance state induces behavior from the crowd such as jumping, screaming, flailing appendages, and some people charge toward the monks at the front of the temple ground. In this entranced state the participants are said to be possessed by their tattoos, and the behavior that ensues is influenced by their specific tattoo design. It is part of the tradition to give people tattoos that reflect their place in society. Meaning there will be different tattoos for different professions or life paths. Near the end of the ritual, guards and paramedics rub the ears of the participants to bring them out of their trance and the monks lead one final prayer. At the conclusion of the prayer, people run toward the stage to get blasted with holy water shot out of a powerful hose.

Right before reaching the monk, the people next in line to the one being tattooed will assist the monk with holding the one receiving the tattoo still. The monk uses a single long thin needle about 18 inches in length and about four millimeters in width. The tip of the spike is split into two (like a split cane), so that each stab of the spike produces two dots of ink in the skin. There are about 8 of these needles in a pot of a type of cleaning solution. Sometimes the monk will sharpen the needle with fine grade sandpaper before beginning. The monk will then select from several different rubber templates with the design of choice. He will apply the template to ink and then press it on to the recipients back to transfer the design. When ready to begin, he will dip the tip of the needle into a mix of oil, probably palm oil, Chinese charcoal ink, and possibly snake venom. He then begins to trace the pattern. The typical tattoo takes about 3,000 strikes to complete. The monk dips the needle into the ink about every 30 seconds. When complete, he blesses the tattoo and blows a sacred Kata (Ghata) on it to infuse it with power. For men, the monk uses the charcoal ink. For women he uses a transparent ink and will use a glove in order to not touch the female body.

The power of any amulet or tattoo decreases with time, so, to re-empower tattoos each year, Sak Yant masters celebrate with their disciples the Wai Khru (Wai Khru meaning to pay homage to one’s teacher). On this day devotees gather in the parlours of their Sak Yant masters to honor them and get their tattoos blessed and re-empowered.

The snake gods and the human serpent