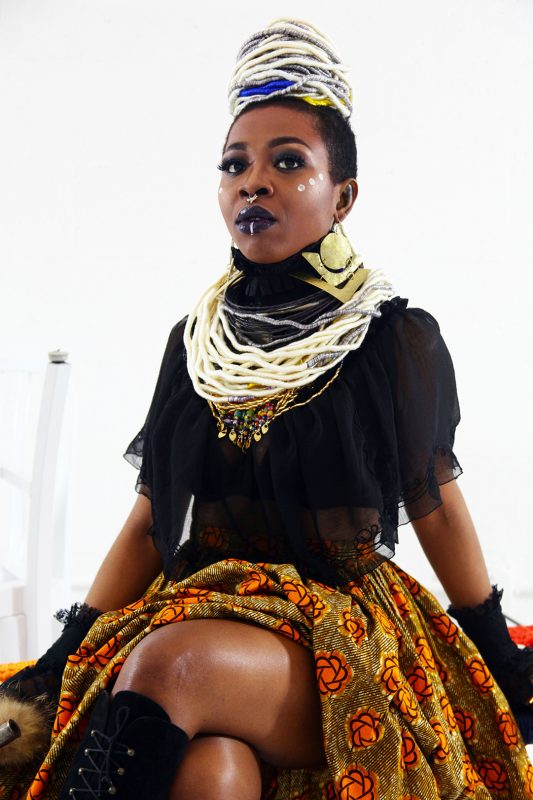 Is Ghana too influenced by Western religion? Ghanaian singer Azizaa and Wanlov the Kubulor of the rap outfit FOKN Bois would argue that it most certainly is. They tackle this “religion issue” in the song and video Black Magic Woman, a satirical offering in which the two openly critique Christianity, which they believe has a damaging, colonial clutch on many Ghanaians.

Ghana is one of the most religious countries in the world and Christianity is big business. Going to church means many things to many people, but one fundamental aspect of the majority of Sunday masses in Ghana is people with very little income giving away a substantial amount of their salary to their pastors. What’s also disturbing about churches and missionaries spreading their gospel in Ghana is that Christianity fundamentally rejects any other religious customs. For Ghanaians, that means any spiritual practices which preceded colonizers—spiritual practices that are often misunderstood and grouped into the animist and polytheist boxes. Given the big role that religion plays in Ghana, this rejection creates a cycle of self-hatred that arises from the conflict of adoring a foreign deity that demands the rejection of elements of local culture and tradition.

“How can anyone of African descent be worshiping the same tool used to uselessly murder their ancestors?”

Azizaa: “History has it that the colonial masters came with the Bible and the gun, gave the Bible to the Africans, as they pointed their guns at their heads.” Azizaa calls her unique blend of music, Voodoo Music, “a bridge (for a gap) that brings together the old and the new, the ancient and the modern, the past and the present, the young and the old, the present and the future. Bringing African spirituality back through music to the world.”

In the booming, percussion-laden track, Azizaa proudly declares herself a “black magic woman from the African jungle,” and challenges monotheistic religious notions by referring to otherworldly entities and embracing ideas commonly associated with pre-colonial, Ghanaian spirituality. The accompanying music video begins with a young woman rejecting the propositions of two overbearing evangelists and joining Azizaa in a “juju” ceremony. The two enthusiastically deject the zealots in the same manner that many Ghanaians have cast down non-Western spiritual practices. Through this, the song raises questions regarding the willingness of some Africans to accept Western culture and religious practices over “traditional” customs.

Azizaa: “These pastors are something else. I’ve seen and heard worse—this is just a lighthearted version of a cold, harsh, bitter reality. I’ve seen trotro preachers aiming their messages at me to repent because of my nose and lip rings, and the blue/green/purple hair. This is not just it—I think Christianity should be banned and made illegal in Ghana, and all of Africa. How can anyone of African descent be worshiping the same tool used to uselessly murder their ancestors?”

Growing up between Accra and New York, Azizaa is a rising voice in Ghana. She speaks and occasionally sings in her native Ewe tongue, and has managed to always stay in touch with her Ghanaian roots. “I come from a family that sings, almost everyone is a musician in my family. It also stems from our culture. In the Ewe culture, there’s a song for almost everything.” Azizaa has a commanding stage presence, its full of mysticism and excitement. Her strange body movements are meant to heal the body and reconnect back to the soul. Her up coming single Adzekolo which means Voodoopussy is catchy and carries a heavy sound along with lyrics celebrating the yoni. “It is an ode to women everywhere who know the power of their magic box.”

Another project she is working on is a jewelry line called KORGA Pieces. “‘Korga’ means something beautiful to adorn the neck with, and as part of our culture the size of your neck piece speaks volumes about your elegance so it takes weeks and sometimes months to create a Korga piece. The black piece I had on my neck in the Black Magic Woman-video took 6 months to create and required 8 hours a day of work. I just introduced my intimate jewelry collection to the website.” ♦