A troll is an unpredictable creature in Norse mythology, that embodies the forces of nature and the word is used as a generic term for such type of spirits. Especially in Sweden and Denmark, fairy tales mixed the idea of dwarfs and other forest-, water– or mountain-spirits, sometimes also with that of human-friendly fairies and elves. 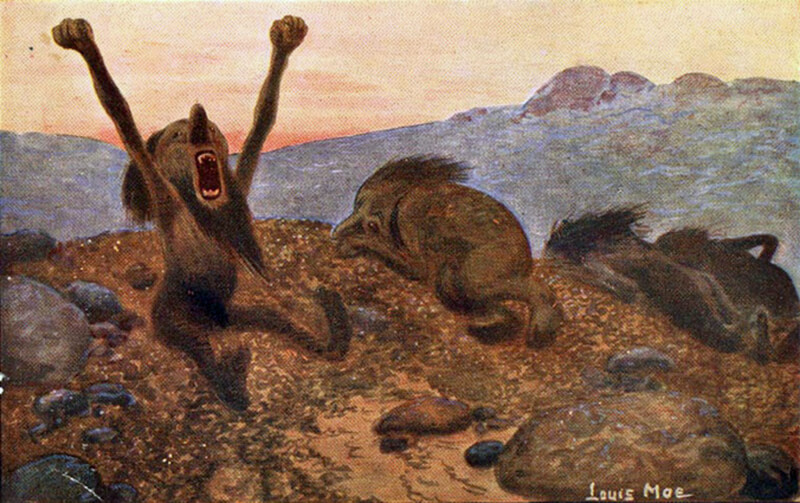 Thus, “troll” became a general term for any kind of more or less human-shaped mythical creature, similar to the fairies of the Anglo-Celtic tradition.

Christianity demonized the trolls, whose existence was still assumed in folk belief until the 19th century. The trolls are often depicted as lonely, beastly or monstrously ugly beings, of ‘giant’ size, living in isolated mountains, dressed in rags or animal skins, or sometimes as dwarfish ugly fur-covered humanoids with a large nose and only four fingers on each hand.

The troll has remained an object of belief since the Middle Ages and Christianization, until the beginning of the 20th century when the numerous legends were collected by researchers. The latest Netflix-movie shows a troll the size of King Kong with similar hobbies: see the trailer on https://www.netflix.com/nl/title/81245455. 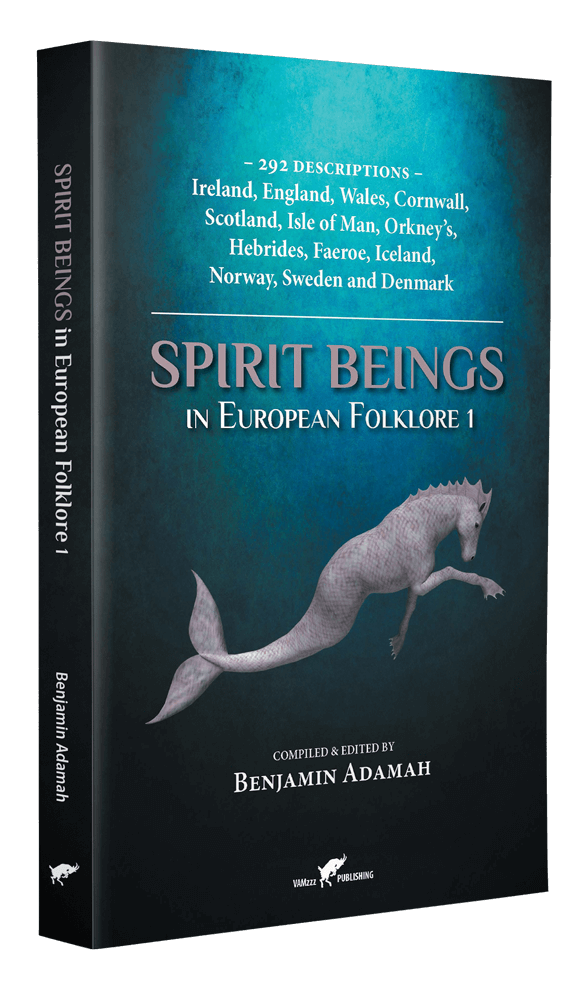 The Scandinavian terms troll and also droll are borrowed from the Old Norse (Old Icelandic) trǫll, which appeared in medieval Norse literature to designate characters from mythology, with the meaning of “possessing magic or dark powers” according to Sveinsson (Troll, an etymological note, Scandinavian Studies, vol. 30, no 3, 1958).

The term is also related to the Norse verb trylla, which means “to drive mad, to lead into a mighty rage, to fill with fury” or “to turn into a troll, to enchant”. In Norse texts, these terms are derived from trollskapr (witch) and tryllskr (of the nature of a troll). Moreover, in modern Scandinavian languages, troll and trylla are derived in numerous expressions, all related to (more or less harmful) magic: Danish: troldom, trolderi, troldmand, trylle (conjure), tryllecraft (magic power), tryllemiddel, trylleri (magic, enchantment) , Swedish: trolldom meaning “witchcraft”, trolleri (magic, enchantment), trolla (conjure), trollsk (magic), trollkarl (sorcerer)… Also found in medieval Middle High German are Trolle or Trol (ghost monster, witch), and trüllen (to play tricks, to deceive).

The end of the Viking Age corresponds to the establishment of royal authority and the beginning of Christianization in Scandinavia, from the 10th century until the 13th century. As a result of the adoption of Christianity by the monarchy, and later by the whole country, traditional spiritual practices and beliefs were marginalized and their followers persecuted.

The völvas, prophets of ancestral practices (sejðr), were usually executed or exiled. The old gods and paganistic rites were replaced by beliefs in new pagan creatures: trolls, jötnars, elves. Symbolically the wild and uncivilized troll, representing ‘the forces of chaos, the enemies of God’ became the most important opponent of Christianization. 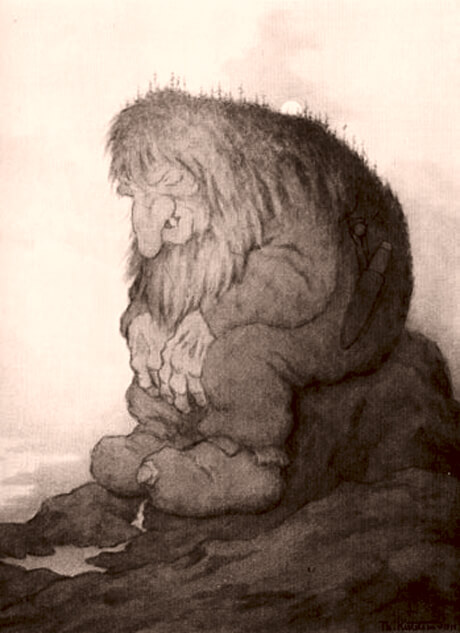 For example, the king and saint Olaf II of Norway, was depicted fighting the trolls as a way of bringing his people into the new religion. It is difficult to determine with certainty the evolution of legends and folk beliefs between the Middle Ages and the modern era, in the absence of sufficient written evidence. Specialists, historians and folklorists base their assumptions on the philological study of Norse and later literary texts. There is no doubt that there are folk legends from the Middle Ages onwards about giant beings or ‘trolls’ living in the mountains and rocks of Scandinavia or Iceland.

These creatures were probably solitary. According to the Icelandic scholar Einar Ólafur Sveinsson (The Folk-Stories of Iceland – 1940), the word ‘troll’ took on a very vague meaning around 1200 (due to Christianization), but popular beliefs were not altered or diminished at that time.

Belief in the existence of trolls gradually diminished around 1600 in Iceland; the appearance of new troll-legends is rare after the Protestant Reformation, and Icelandic troll-stories from the 17th and 18th centuries seem to originate from before the Reformation.

The Icelanders certainly believed that the troll race had disappeared. The beliefs and characteristics of the troll vary greatly, depending on the time and region of Scandinavia, making it difficult to attempt a general description of the troll.

An important aspect of the legends is that, despite its today’s cliche image, troll’s were rarely described physically in the old literature. Legendary accounts usually leave out the troll’s appearance and focus mainly on the troll’s actions and the explicit mention of his supernatural nature, i.e. his distinction from humans.

The appearance of the troll is sometimes even mentioned as being identical to humans, like the trolls that inhabit the wild forests of central Sweden.

The size of the troll is rarely mentioned either; even when the troll seems to inherit divine characteristics from the Jötunn of ancient mythology, its size is very rarely determined.

The modern idea of the huge or ‘giant’ (or naive) troll is mainly inherited from nineteenth-century fiction (fairy tales, illustrations). 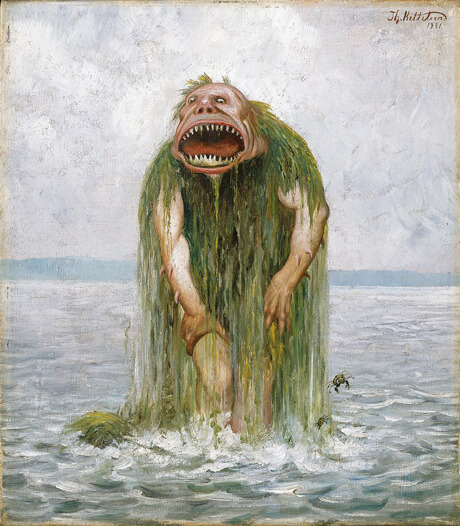 The legendary troll is essentially defined by his connection to wild places and natural elements: the sea, certain forests, mountains or rocks, i.e. wild places, alien to human civilization.

The troll thus takes on its meaning as the symbol or embodiment of natural forces, regarded with respect and fear by man, because of their strangeness and danger.

The troll is also defined by its difference from man and the difficulty of peaceful cohabitation between the species. Legends repeatedly mention the problem of human encounters with troll, the abduction of human women and children by trolls, ways of avoiding, defeating or killing them; in particular, the troll’s weakness towards fire, lightning (storm) and light (sun). In some regions, the troll’s characteristics are identical to those of other supernatural creatures, or sometimes its powers are greatly diminished.

This difference may be due to confusion between the troll and other legendary creatures (småfolk) from Scandinavian or Germanic folklore. The characteristics of the troll are sometimes confused with those of elves, Huldra’s, etc., especially in the southern regions (Denmark).

When the troll is assimilated to small (and not very dangerous) creatures, its characteristics are sometimes attributed to the Christian influence which fought against pagan beliefs and depreciated the influence of the troll.

Brook horses or Water horses of Celtic and Nordic Folklore

Leshy, the Lord of the Russian Forest

The Domovoy and other Fairies of Russian folklore