Bloody Mary, the cocktail and the gruesom phantom in the mirror…

Bloody Mary, apart from a world famous cocktail, is a phantom, or spirit conjured to reveal the future. She is also known by the names Mary Worth, Mary Whales, Hell Mary and Mary Jane. Swedish folklore tells of a Svarta Madame who is said to correspond to Bloody Mary. She appears in a mirror when her name is chanted repeatedly. The Bloody Mary apparition may be benign or malevolent, depending on historic variations of the legend. 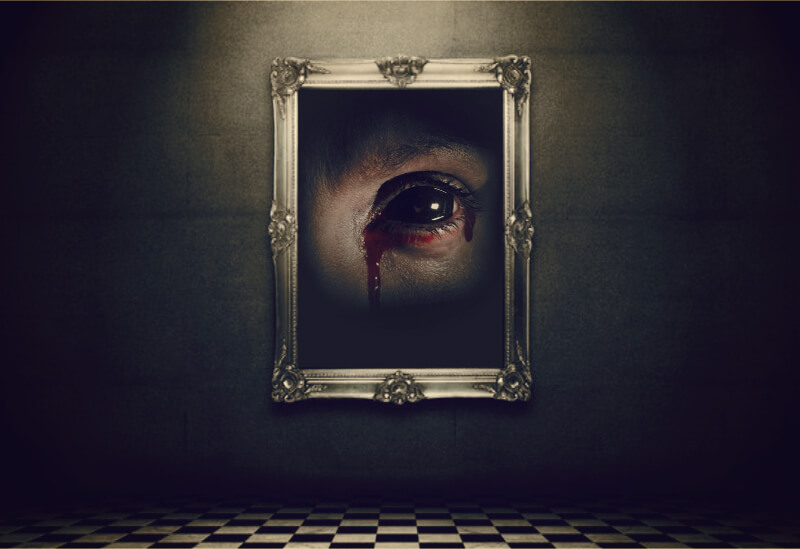 Bloody Mary appears in the mirror of girls after performing their ritual.

Bloody Mary appearances are mostly “witnessed” in group participation play or by a man who is about to die. Historically, the divination ritual encouraged young women to walk up a flight of stairs backward holding a candle and a hand mirror, in a darkened house. As they gazed into the mirror, they were supposed to be able to catch a view of their future husband’s face.

There was, however, a chance that they would see a skull (or the face of the Grim Reaper) instead, indicating that they were going to die before they would have the chance to marry.

Love Potions Through the Ages

In the ritual of today – popular in the UK and USA among young people – Bloody Mary allegedly appears to individuals or groups who ritualistically invoke her name in an act of catoptromancy. This is done by repeatedly chanting her name into a mirror placed in a dimly-lit or candle-lit room. The name must be uttered thirteen times (or some other specified number of times).

The Bloody Mary apparition allegedly appears as a corpse, witch, or ghost that can be friendly or evil, and is sometimes seen covered in blood (hence the name). The lore surrounding the ritual states that participants may endure the apparition screaming at them, cursing them, strangling them, stealing their soul, drinking their blood, or scratching their eyes out.

Bloody Mary is said to appear only in mirrors (mainly bathroom mirrors), usually as a girl or young woman with long hair and pale skin. Blood is said to run down from her forehead from a long gash. Alternatively, her spirit is said not to appear herself, but instead the summoner sees a bleeding version of his own reflection. 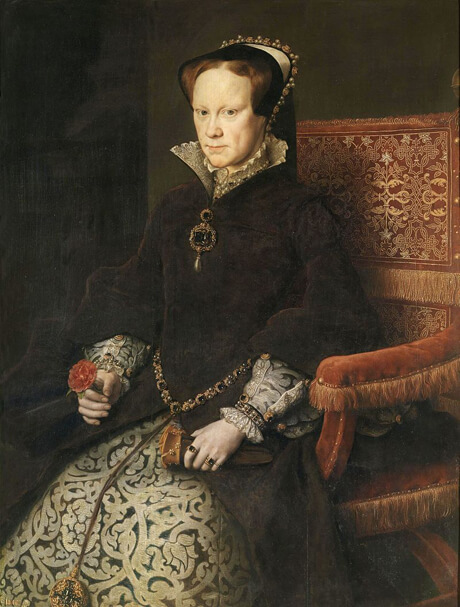 Mary I of England – nicknamed Bloody Mary after which the cocktail was named.

The world famous – and not unhealthy cocktail – got its name from Queen Mary I.  This cocktail is said to have been first mixed in 1921, at Harry’s New York Bar in Paris, by the French bartender Fernand Petiot, according to his granddaughter, well before any of the later claims, and was called “Bucket of Blood” at the time because of its red appearance. Later they also called the drink “Red Snapper”. New York’s 21 Club has two claims associated with it. One is that it was invented in the 1930s by bartender Henry Zbikiewicz, who was charged with mixing Bloody Marys. Another attributes its invention to the comedian George Jessel, who frequented the 21 Club.

She is best known for her vigorous attempt to reverse the English Reformation, which had begun during the reign of her father, Henry VIII. Her attempt to restore to the Church the property confiscated in the previous two reigns was largely thwarted by Parliament, but during her five-year reign, Mary had over 280 religious dissenters burned at the stake in the Marian persecutions.

The Witches of New York

However, the story of the origin of the name has not yet reached a general consensus.  The bloody mary is said to have been named after the 16th-century Queen Mary I of England, who was nicknamed “Bloody Mary”, George Jessel claimed that he had named the cocktail after a friend, Mary Geraghty, and it is also believed that the name is a reference to Mary Welsh, wife of Ernest Hemingway.

A Bloody Mary is traditionally served over ice in a tall glass, such as a highball, flared pint or hurricane glass. The two critical ingredients, vodka and tomato juice, are relatively simple; however, the drink almost never consists of these two ingredients alone. Among the more common additions to the juice base are salt or celery salt (either mixed in or as a salted rim), cracked pepper, hot sauce (such as Tabasco), citrus juices (especially lemon or lime), Worcestershire sauce, celery seed, horseradish, clam juice or olive brine, brown sugar or molasses, or bitters. 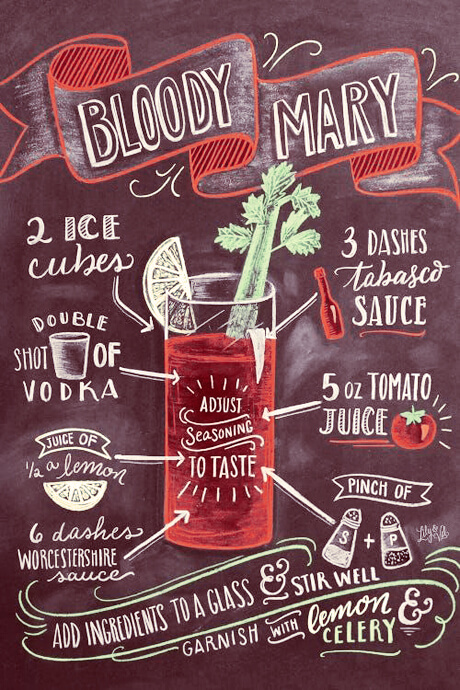 Some or all of these ingredients can come pre-mixed with the tomato juice as a single “Bloody Mary mix” to which the vodka is added, or the drink may be hand-constructed by the bartender from raw ingredients according to the patron’s preference. A common garnish is a celery stalk when served in a tall glass; other common garnishes include olives, cheese cubes, a dill pickle spear, lemon wedges, dried sausage, bacon, and shrimp (as the taste of the drink is often reminiscent of shrimp cocktail sauce).

There is a considerable amount of variation available in the drink’s construction and presentation including the use of different base spirits like bourbon, rye, tequila, or gin. Gin is often preferred in the UK, sometimes called a Red Snapper (although this name is also used for other variants), or Ruddy Mary.

A Virgin Mary, also known as a Bloody Virgin , a Virgin Bloody Mary , or Bloody Shame is a non-alcoholic cocktail, generally using the same ingredients and garnish as a Bloody Mary (according to local custom), but with the spirits replaced by additional tomato juice or prepared mix.

The mystery of the White Ladies
Huldra or Skogsrå, the femme fatale of the Scandinavian forests
Jewish Femmes Fatales for Dummies
Witch bottles for warding off evil and curses
Thirty years among the dead
La Cegua, Segua or Tzegua, a Central American horse headed Lamia
Investigating “An authenticated Vampire story” by Franz Hartmann