The mysticism of Mapuche People 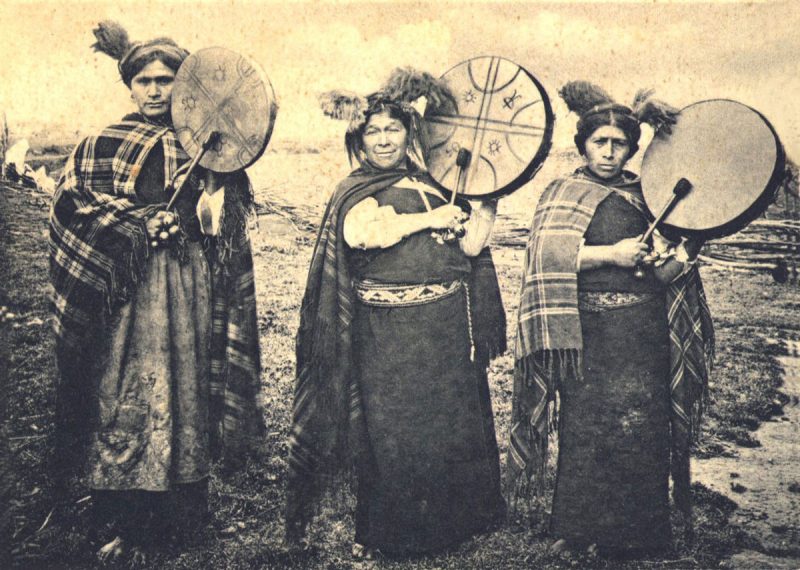 Mapuche people are located in South America. We are still a living community, as we were not completely destroyed by the Spanish, who  invaded the “new world” after 1492. Mapuche means in Mapudungun (mapuche language) “people from the earth” mapu = earth / che = people.

The Mapuche nation has experienced oppression for hundreds of years now, nevertheless it has been able, throughout history to creatively absorb this oppression and transform it into Archetypal Inherent Strength. Therefore, it’s ancient and rich cosmology remained alive until today. The cyclic cosmic dualism of the Mapuche is characterized by a combat between two titanic serpents: the huge oceanic serpent (kai kai) and the huge terrestial serpent (tren tren). The victory of the terrestrial serpent allowed that people could survive, that they could climb to the peak of the mountains and volcanoes, establish there, blossom and re-begin their way of living. This mythological battle carries in itself a paradigm found in other cultures on our planet: the cosmic conflict between two forces which is the beginning of all life and form. 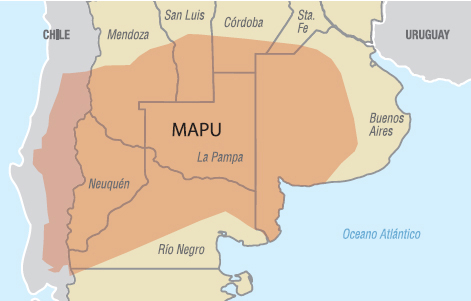 The Mapuche anthropology sustains a multidimensional vision of life, represented in seven dimensions of reality, which gives us the capacity to consciously relate with the environment, society and ourselves. Something that constitutes the ethical foundation of all authentic anthropological traditions.

The Mapuche cosmovision conceives a non-anthropomorphic god, but a Newen – god – which is essentially energy (Newen in mapudungun), rooted in the understanding of our being, what inspired the definition of who we are: People from the Earth. In this way, the Land-Earth is recognized and defended as an ethical, spiritual, foundational and non-negotiable value.

The Earth is considered a mature energized being, where every tangible and non-tangible phenomena is an expression of the same substance, that can be perceived by our physical senses, when it is densified.

The Earth is considered a mature energized being, where every tangible and non-tangible phenomena is an expression of the same substance, that can be perceived by our physical senses, when it is densified. This is the cultural archetypal foundation of Mapuche cosmovision: the archetype of the Great Mother, that Universal Mother who has given birth to us, and who has generously welcomed us. That matter/mother is taken care of by us, it is cultivated with love, as if it were the body of a goddess, the relationship with our Mother-Earth is an authentic ontological connection.

Ñuke Mapu – Mother Earth, Chaw Antü (father Sun), several Ngen (spirits present in the four natural elements) and finally the mystical union between Am (human soul) and Pillán (the spirit), characterize the mystical-natural horizon of the Mapuche heart. We trust in Mapu (Earth) since she has the wisdom to care for her own body, her children and all inhabitants of her house.

From this conception and understanding, the entire universal life is made from one unique mother-substance called Füta Newen (the great force) that connect all material and non-corporeal being in one energy ladder, which is ritually represented by a wooden trunk cut in 7 steps (symbol of 7 layers or dimensions of reality), this trunk is called Rehue, and represents the universal life animated by levels of subtle and spiritual matters, but coming from an identical womb-uterus. In this acknowledgement exists the ethical principle of respect to every single “other”, because that other is an energetic extension of its own identity, whether it be a stone, a planet, a flower, an eagle or a person.

The cultural Mapuche attitude considers the notion of matter and spirit, and life and death, as merely dialectic expressions, which do not reach the dynamic, energetic and multidimension of life. 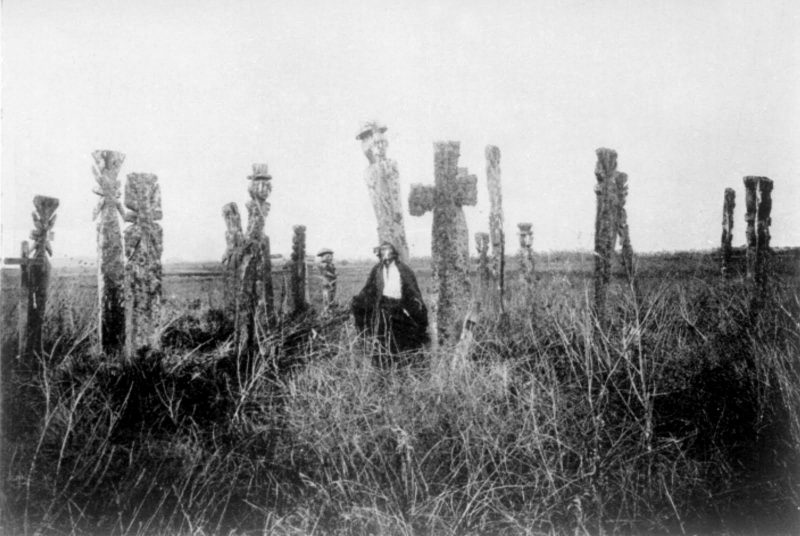 Mapuche Cemetery, sacred place where elders have contact with the underworld to pass the wisdom on to future generations.

Mapuche people use to tell “we are people from the cosmic, terrestrial and oniric (dream world) space…”, in this way one of the fundamental characteristics of the ethical consciousness is expressed: the sense of space, a capacity to perceive all ranges of dimensions and phenomena that are manifested within, without and around a human being.

Mapuche awareness embraces the heart pulses, the spasms and the breath of our Mapu (Mother Earth) considered as Sacred, as the number 4, the key to interpret its cosmovision. From that space, humans descend from chaos as a divine being, however not yet a complete expression of that divinity. What we understand and know as humans today, is not yet a precise expression of that archetypal divine being.

It is believed that many human creatures, do not possess genuine humanity, those humans have mutated due to a psychic energy of animal order which literally devour the Am – human soul.

It is believed that many human creatures, do not possess genuine humanity, those humans have mutated due to a psychic energy of animal order which literally devour the Am – human soul. Transforming the person into a sort of automata, living dead creature, without authentic soul. Which explains the notion of the unity between soul/consciousness and ego/unconscious. This living-dead condition (Witranalwe) can be resolved when the Am – human soul is energetically united with Pellü – the Spirit, giving birth to a Cosmic-Spiritual Being called Pillán.

This mystical-psychological process of transformation and individuation, is helped and promoted by the Machi, a female Mapuche shaman. Machi is a spiritual leader, who has the task to heal the soul, the body and to take care of the community. She is the one who knows in depth the cosmovision, the language and ritual protocols, the elemental medicine and the superior ethic. Machi is the one who establishes contact with the seven dimensions of nature, she does it through a mystical trance, during ancestral rituals around the Rehue (the sacred wooden 7 steps trunk totem). She dances around the Rehue, playing the Kultrum – a sacred drum. Nguillatün is our thanks-giving ceremony; and Machitün is our healing ceremony; among other ceremonies and celebrations that are carried out depending on the occasion. 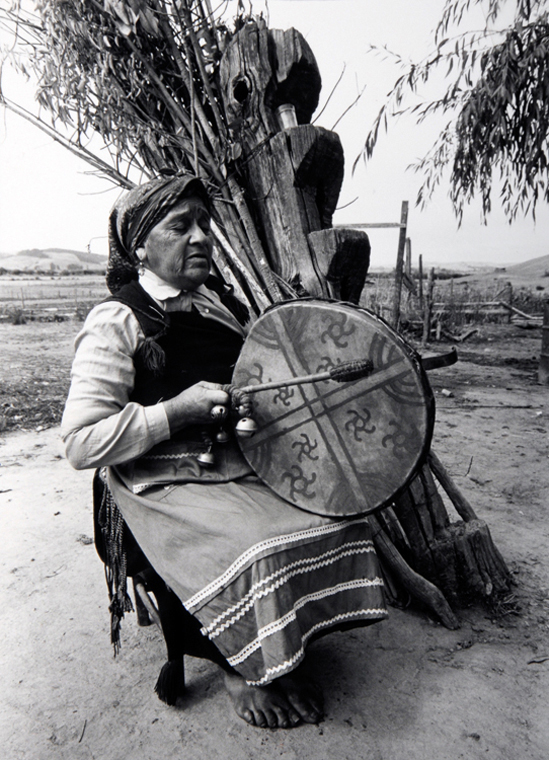 For a woman to become a Machi, she must possess typical psychological characteristics like self-determination or conscious Will, visions, premonitory dreams, revelations, the capacity to be an authentic medic of the soul, and the ability to identify Kalkuce (the black energy) who damage people, animals and the land. Besides, this female figure is the guide of the agricultural activities, she guarantees a horizontal-democratic functioning of the community, she is the ultimate authentic person of all ethic and energetic initiatives of Mapuche culture.

The Machi – is a concrete incarnation of the principle Ñuke Mapu – the Great Mother made flesh, the cosmic energy humanized to deal with human issues. In her rituals, she conducts the ceremony playing the most important instrument of the tradition, the Kultrum, a semi-spheric, membranophone drum, constructed with native wood, covered with goat skin (symbolic animal for lower energies).

The drum is painted with four cardinal points to represent the tetradimension power of Ngenechen – the universal god. The semispherical shape of the Kultrum represents the half of the manifested world, the visible and mortal realm, which is parallel to the invisible-inmortal realm. Through the sound, the rhythm and the vibration of the ceremonial Kultrum, symbol of the cosmic womb, a communication is established with Wenumapu – higher being… To  restore… to heal… to guide… to live… ♦